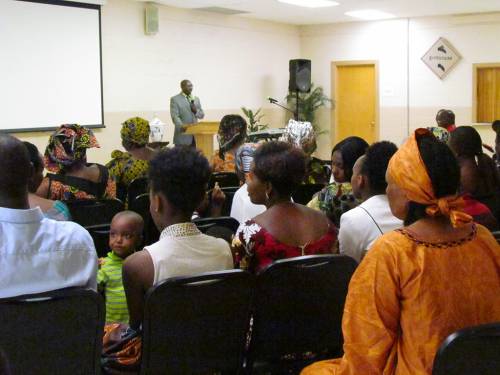 LOUISVILLE – If it’s true that the U.S. is a mission field, then the Rev. Gisonga “Aaron” Ruvugwa is a man on a mission.

Ruvugwa—who had experienced the horrors of war in his native Congo and subsequently endured the bleak conditions of refugee camps in Rwanda and Burundi—immigrated to the U.S. with his family as refugees in 2003.

Several years later, upon settling in Columbia, Missouri, and becoming affiliated with Trinity Presbyterian Church, Ruvugwa found himself hungering for the familiarity and centrality of the kind of church he knew in Africa.

“I was called to serve God a long time ago,” said Ruvugwa, who was raised in a Christian family, and whose father, now deceased, was an evangelist. “We knew God. But when we came here, everything was new for us. That’s why we began the [Agape] fellowship in our home.”

Although previously ordained by the Maranatha Church in Africa, Ruvugwa said he always had a natural affinity toward the Presbyterian Church.

Not long after the small group of immigrant families from Africa began meeting in his home, Ruvugwa reached out to the Presbyterian Church (U.S.A.)’s national offices in Louisville. The budding fellowship immediately received a visit from the Rev. Angel Suarez-Valera, former associate for New Immigrant Congregational Support for the Presbyterian Mission Agency, who then connected Ruvugwa with the Missouri Union Presbytery. In 2009, the Agape African Fellowship came to life as a new worshiping community, and was later recognized as a validated ministry of the presbytery.

According to Ed Hander—a ruling elder member of First Presbyterian Church, Columbia, who serves as moderator of the presbytery’s African Immigrant Fellowship Mission Team—the purpose of the fellowship is to provide a “home” for Christian refugees and immigrants from Africa to enable them to worship in their native languages, maintain aspects of their culture in order to strengthen their families, and allow them to integrate in the U.S. culture without diminishing the faith and worship traditions that sustained them through their trials in Africa.

“With their background—spending 30 years in refugee camps and having everything that they own taken away from them, in many cases having their whole village killed—making sure that they have a home and a sense of community is our goal,” said Hander.

Hander, who like Ruvugwa, was also a man on a mission, had his own reasons for being involved with Agape.

A lifelong Presbyterian, Hander grew up near Houston and later lived for 30 years in San Antonio. It was while he was a member of First Presbyterian Church, San Antonio, that he made two mission trips to Kenya.

“That was the turning point as far as my mission involvement was concerned,” he said. “Then when we moved to Columbia and I started attending First Presbyterian Church, one day our pastor asked if I might be willing to serve on a mission team whose purpose was to support an African immigrant fellowship, and I agreed. Over time I began to see that God had not forgotten my love of Africa and for the church there, and that while I could not go to Africa, God had brought Africa to Columbia. He was just waiting until the time was right. You don’t have to go to Africa to be a missionary. Just look around you—God will bring the world to you right where you are.”

Hander estimates that the fellowship numbers about 12 families—roughly 100 people—and is growing as new families relocate to the U.S.

“When families are relocating, the U.N. Refugee Agency and the State Department look for places where they can send them to establish communities,” he said. “Since the community here has been very successful in finding them jobs and there’s already a vibrant African community here, new families, many of whom are relatives of the people who are already here, are starting to come to Columbia.” 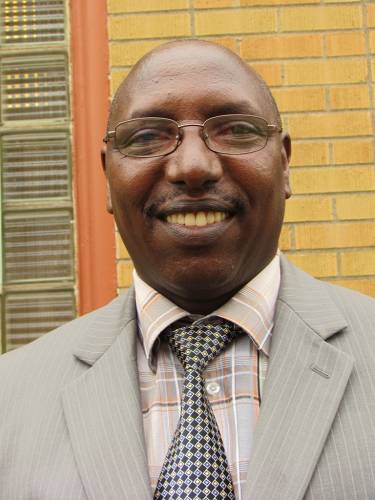 Because many of the families speak little or no English, lack a basic education, and don’t have cars or can’t drive, Ruvugwa spends much of his time providing transportation, helping them with their interactions with the various social support agencies, schools, and medical services. He also provides mediation when conflicts arise within families or the congregation.

“The first place these families go is to their church to have their problems resolved,” Hander said. “One of the things I would love for us to do as Americans, as Presbyterians—as Christians—when we have a problem, the last place we would go is to our church. To them, the church is the center of their community. That’s where they go with all of their conflicts, all of their needs. Aaron does a good job being the pastor of his flock. It’s a different lifestyle, a different way of looking at life and of being a Christian.”

Because Agape is not and will likely never be self-sustaining, Ruvugwa is paid by funds that are collected and disbursed by the presbytery.

Although providing for the fellowship financially will always be a priority and a challenge for the presbytery, Hander identified a related goal—with significant financial implications—that emerges deep from the heart of the refugees’ experience. The community, which now worships every Sunday from 4:00-6:30 p.m. in a commercial building in Columbia, would like to have its own place to worship.

“Having a space which is theirs would give them a sense that they are in a final home and not subject to being uprooted by things beyond their control,” said Hander. “Keep in mind that everything they had in the past was taken from them, and they have been dependent upon the charity of others ever since. I think that in the back of their minds is the fear that everything will fall apart again somehow.  Having never experienced that in our lives—at least to the extreme degree to which they have—we cannot imagine how important it is to have something to call your own. Our goal, although it is far away at the moment, is to help them get that space.”

The Agape Fellowship has also received significant support from the PC(USA)’s 1001 New Worshiping Communities initiative through Mission Program Grants. In August 2014, Agape received a $7,500 Seed Grant, followed by a one-time $25,000 Investment Grant. As a condition of the latter grant, Ruvugwa has just been assigned a coach, Dave Moore, to mentor him in ministry.

“Because we’re very concerned that we have a continuing source of income, our main focus this year is to increase awareness and support of the Agape Fellowship throughout the presbytery,” Hander said. “When I recently spoke about Agape to the Presbyterian Women’s fall gathering, I mentioned to them that one of the things I remembered as a child was that our church supported missionaries around the world. Nowadays we’ve lost that personal touch. What Agape allows us to do is to build that one-on-one relationship again. People can come and visit with them, or attend the worship service. They can support these families, who in turn support their families in Africa. It becomes a real thing rather than a line item in the budget—these are people that you know.”

But the benefits of the association between Agape, the presbytery, and the wider church are even more profound and far-reaching than that. Agape is helping U.S. Presbyterians to “see themselves and the world through different eyes.”

“In our discussions at our mission team meeting the other day, we agreed that what Agape is really teaching us is humility,” Hander said. “Not only do we not have all of the answers, we don’t even know what all of the questions are.”

And while some of the questions the groups uncover together are hard ones, Ruguvwa doesn’t hesitate to ask them.

“Our people wonder how you can just worship for one hour on Sunday,” he said. “When they go to an American church—one hour—they say there’s no time to sing or to praise God. We are like missionaries here. When people come and see us, through our singing and our praying we can change the way Americans see church.”