…be led forth in peace. (Isaiah 55:12). Support to the Peace & Global Witness Offering.
Make A Donation Click Here >
Home › After a tornado destroyed its building, a Kentucky church begins to move forward

With cleanup and recovery done, First Presbyterian Church of Mayfield begins to think about its mission and rebuilding 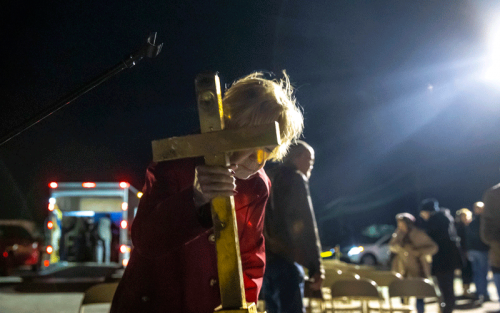 LEXINGTON, Kentucky —  One month to the day after a tornado destroyed First Presbyterian Church of Mayfield’s church building, its session voted to recommend to the congregation that the church rebuild on the same site.

That decision is not final as “we feel like the whole congregation needs to be involved in that,” session member Danny Upton said. So the question will be considered during an upcoming congregational meeting. But over the month since the church’s 106-year-old building was all but leveled by a historic tornado, members have completed the process of recovering items that could be salvaged and clearing the site. 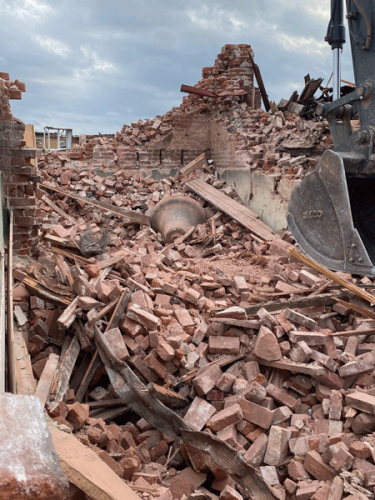 That began simply with intrepid church members who went in on the days after the tornado struck to retrieve items including a stained-glass window, the cross from the church’s Communion table, the church’s handbells, and the blueprints for the building. In subsequent weeks, the church retrieved some larger items such as the choir room’s upright piano, culminating with the church bell.

In the midst of that activity, on Christmas Eve the church gathered at the site of its home for more than a century to say goodbye. 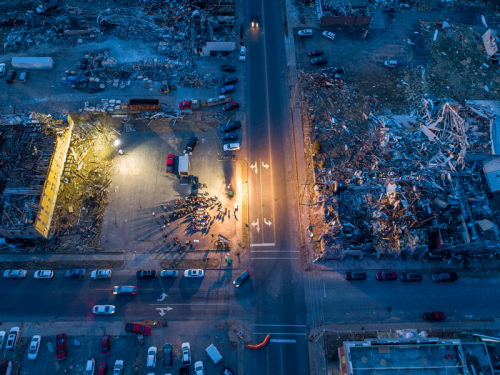 Members of Mayfield’s First Presbyterian Church and First Christian Church gather in an empty lot between their destroyed church buildings for a joint Christmas Eve service. This photo appeared on the front page of the Dec. 26, 2021, edition of The New York Times. (Photo by Ryan C. Hermens, Lexington Herald-Leader)

It was billed as a candlelight service, though Pastor Don Barger says it was hard to keep candles lit in the wind, even with hurricane lanterns, so cell phone flashlights were substituted. It was a meaningful time, shared with neighboring First Christian Church of Mayfield. A photo of the service by photographer Ryan C. Hermens of the Lexington Herald-Leader appeared on the front page of the Dec. 26 edition of The New York Times.

“It gave people an opportunity to go across and pick up a brick if they wanted that souvenir to take home as a memento, to look fondly one more time, to recall stories, rethink previous Christmas Eve services that were held there,” Barger said. “I get choked up every Christmas Eve service as we sing ‘Silent Night’ by candlelight, and trust me, this year was no easier at all.” 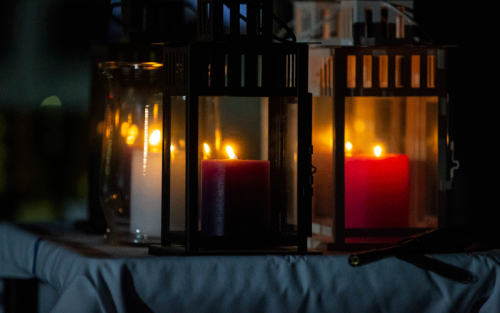 Candles are lit during a Christmas Eve service with members of First Presbyterian Church and First Christian Church in an empty lot between their destroyed church buildings in Mayfield, Kentucky. A tornado devastated the community on Dec. 10, 2021. (Photo by Ryan C. Hermens, Lexington Herald-Leader)

Upton and his wife Juanita Upton said their entire family was there including four sons who had been baptized in the church and raised in the church. Several of the Uptons’ sons were married there, and their grandchildren were baptized there. 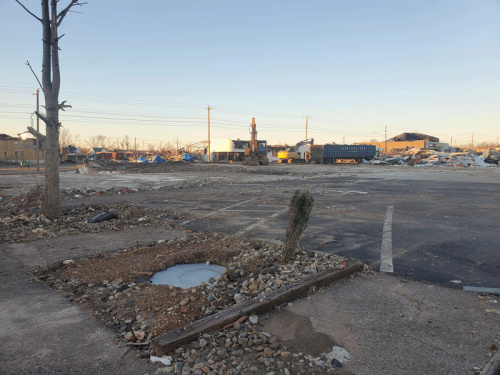 Danny continued, “We’ve got lots of family pictures in that church. So, this was the last one. We got a chance to just say goodbye to that building. That is the past. Right now, a clean lot is present, and hopefully the future will be a new church standing in that location. Then we’ll have a family picture in front of that church.”

The Uptons said the church has been grateful for financial and material donations from around the country since the tornadoes.

What that will look like is still to be determined.

Barger sees his role as asking questions, sometimes playing devil’s advocate, to help the church think about what it wants to be and how a new building will serve those goals.

“As we were talking with an architect last night, one of the things he encouraged us to ask as we talk to the congregation is what is your mission in Mayfield?” Barger said, recalling the Jan. 10 session meeting. “What do you do? What do you want to do? That will determine what your structure looks like.”

Barger and the Uptons say so far answers to those questions point to staying where they are, where groups that use the church facility for things like Alcoholics Anonymous meetings and community meals can easily get to the building. They also say that the church would like to be part of a revitalized core of Mayfield.

“What you hear is people who have grown up in Mayfield say they want Mayfield to live again. They don’t want downtown to disappear,” Barger said. “We want to be a part of that regrowth, that revitalization downtown.”

The mission-oriented questions may come into play more in what the structure looks like and how it can be structured to serve the congregation and the community. There are also considerations over how some elements of the old building, including the bell, may be incorporated into the new structure. 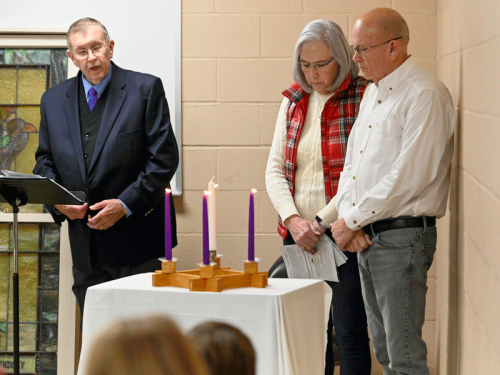 Lay Pastor Don Barger and First Presbyterian Church members Juanita and Danny Upton pray during the lighting of Advent candles at the Dec. 19 worship service in the break room of the Upton’s Kendor Wood manufacturing facility. (Photo by Rich Copley)

For now, the church has made the breakroom at Kendor Wood, a kitchen cabinet door factory owned by the Uptons, its worship space. The space includes objects from the former building, including a stained glass window, the Communion table cross, and the choir room piano, which was filled with dust from the tornado, making it a challenge to retune. 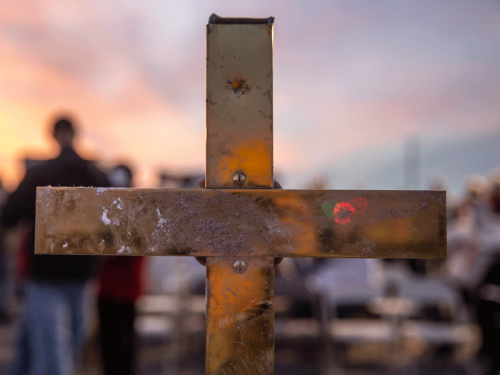 A battered and dented cross was recovered from First Presbyterian Church in Mayfield, Kentucky, on Dec. 24, 2021. (Photo by Ryan C. Hermens, Lexington Herald-Leader)

The Uptons said the church received offers from other area churches that were not damaged to use their space. But for now, they say First Presbyterian is comfortable having its own space where it doesn’t have to work around another congregation’s schedule. There is even talk of having picnics at a park space adjacent to the factory when spring and summer come and developing other creative alternatives for worship.

“It’s not a big deal for us since it’s a family business and the whole family goes to church there,” Danny Upton said.

“What’s in the future for us? I don’t know. But right now, we’re looking forward to heading down that road.”