#GivingTuesday – Join the PC(USA) in responding to a world in need! Give now!
Make A Donation Click Here >
Home › ‘Advocacy Watch,’ bonus episodes from ‘A Matter of Faith’ podcast to highlight work of PMUN and OPW offices 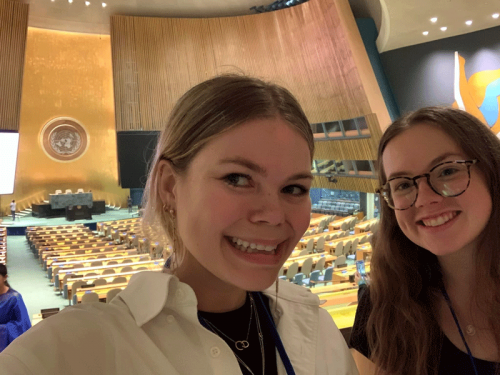 Emma Johnston, at left, and Victoria Alexander are Young Adult Volunteers serving at the Presbyterian Ministry at the United Nations. (Contributed photo)

LOUISVILLE — The “unreal” thrill of being able to witness the 77th session of the United Nations General Assembly in person was the focus of Monday’s episode of “Advocacy Watch,” additional content from the creative minds at “A Matter of Faith: A Presby Podcast.”

The new program, which debuted in September, is co-hosted by Sue Rheem, the Presbyterian Church (U.S.A.) representative to the United Nations (PMUN), and the Rev. Jimmie Hawkins, who leads PMUN and the Presbyterian Office of Public Witness. The idea was brought to them by Simon Doong and the Rev. Lee Catoe, co-hosts of “A Matter of Faith.” Listen to Advocacy Watch 2 here. 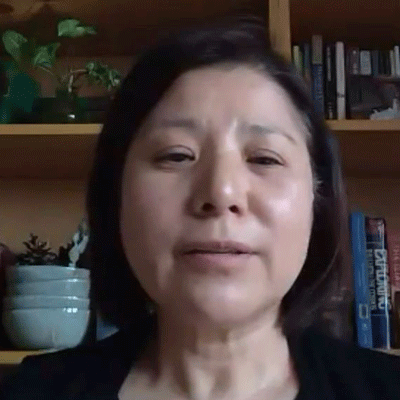 Sue Rheem is the PC(USA) Representative to the United Nations. (Screenshot)

“We wanted to reach a new audience — young folks — to let them know we exist,” Rheem said after the latest episode. “We hear constantly that they didn’t know the church has advocacy offices in Washington and at the UN. Now, the audience will know what we are working on and how they can also engage in advocacy. We are really excited about it!”

Special guests on the episode were Ivy Lopedito, associate for international issues at PMUN, and Young Adult Volunteers Victoria Alexander and Emma Johnston, who are assigned to PMUN in New York. You could hear the excitement in their voices as they discussed their visit to the UN General Assembly gathering, which took place last month at UN Headquarters.

The General Assembly gathering, which opened Sept. 13, was the largest one in the three years since the Covid pandemic significantly curtailed global travel and stopped in-person gatherings. World leaders came together to discuss topics such as climate change, war and global economics, with general debate occurring Sept. 20-26.

“The UN General Assembly is considered the Super Bowl and the World Cup of international diplomacy that meets once a year in September,” Rheem told listeners.  “It’s where the world leaders gather to speak to the world about their country’s priorities and speak to one another about pressing issues.”

Later, she added by email: “Because the Presbyterian Church (U.S.A.) has special consultative status with the UN Economic and Social Council, PMUN staff were able to attend the General Assembly High Level Debates, listening to speeches by world leaders. We also met with leaders of member states to discuss areas of concern, advocate for the policies of the church and participate in events with other civil society organizations to raise awareness about climate change, human rights violations and peace, among other issues.

“In all, PMUN practiced ministry of presence during this time to be at the Assembly Hall and to listen to what the member states have to say and be faithful disciples of Christ to give witness to those whose voices aren’t being heard in the arena of international diplomacy,” Rheem added. 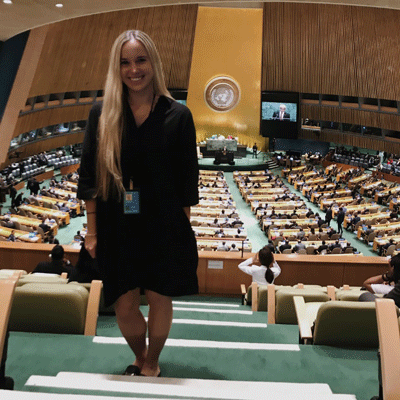 Ivy Lopedito is associate for international issues at the Presbyterian Ministry at the United Nations. (Contributed photo)

“Basically, this theme stems from the recognition that the world is at a critical moment in the history of the United Nations, due to the complex and interconnected crises,” from the pandemic and the war in Ukraine to a tipping point in climate change, she said. The UN believes it’s “necessary to find and focus on joint solutions to these crises and build a more sustainable and resilient world for all and for the generations to come.”

Later, she commented on what it was like to attend. “Being in person is just, it’s so exciting,” she said. “There is an energy that I really haven’t felt in a long time … and I’m like, ‘Man, I don’t want to take any of these opportunities for granted,’ and, you know, really, this is the biggest moment on the diplomatic calendar.”

One of the highlights, according to Alexander, was President Joe Biden coming to give a speech. “As we were getting closer, you could feel the energy in the room rising,” she said.  “Everyone was in their seats for Biden’s speech and the level of authority and influence that the U.S. wields — there was something tangible to that in the room and you could really see (that) people were paying attention, for better or for worse.” 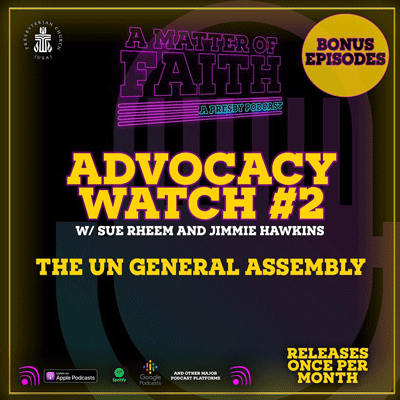 Advocacy Watch, brought to you by the creative minds behind “A Matter of Faith: A Presby Podcast,” airs monthly.

Alexander went on to explain feeling a special duty as not only a U.S. citizen but a young person in a Church that can help to lift up particular issues as well as marginalized people. “It was just unreal to get that feeling in person and to be at the center of where it was all happening,” she said.

Doong, co-host of “A Matter of Faith,” is looking forward to new episodes of “Advocacy Watch.” The added content will air each month and will fill a particular niche.

“We wanted to launch ‘Advocacy Watch’ because we felt like there is so much good advocacy work going on, both in Congress and at the UN, that people don’t know about,” he said. “Additionally, there are more advocacy opportunities for people to tap into and way(s) to connect with the OPW and PMUN than people might realize. We wanted to provide a space for those offices and opportunities to be highlighted.”