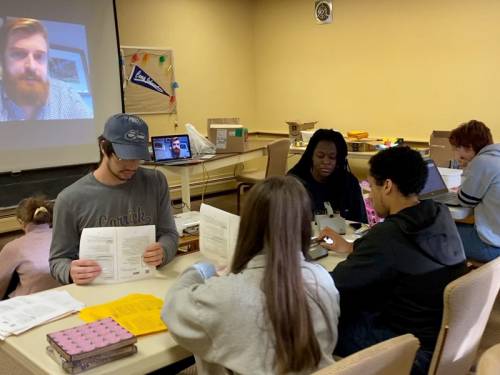 LOUISVILLE — Thanks to a half-dozen gap year staff members, all recent high school graduates, and Patrick Alfieri, an intrepid emerging leading intern, more than 400 children and youth with ties to Johnsonburg Camp and Retreat Center in the northwest corner of New Jersey are celebrating Advent through Advent kits lovingly and thoughtfully prepared and distributed by the camp’s seven staffers.

“Turning an idea into reality for a hands-on faith experience is a hallmark of outdoor ministry,” said Elise Bates Russell, Johnsonburg’s executive director. “This embeds faith practices in the spiritual journey of young adults while they effectively enable the faith formation of so many others.”

The “so many others” is no small matter: Bates Russell estimates four family members are using each Advent kit, meaning 1,600 have been blessed by the effort during an Advent season being observed through social distancing due to the coronavirus pandemic.

“Our interns gather together each month to think of new and creative ways to engage campers in this strange season of social distance,” said Alfieri, who’s trained as a teacher and has worked for several summers at the camp. “The Advent kit was first conceived in one of these ‘Camper Connection’ brainstorm sessions late in September.”

Early in the summer, year-round staff had sent out kits full of camp gear, Scripture studies and outdoor activities “to great success,” Alfieri said. “We planned to put together a similar sort of kit to guide campers through the Advent season.”

Since staff members all had different Advent and Christmas traditions, “each of us had different ideas of what to include: Chrismon ornaments, nativity sets, Advent wreaths, candles, recipes, personal testimonies, winter gear. We were all excited, but about different things. We lacked a unifying vision.” 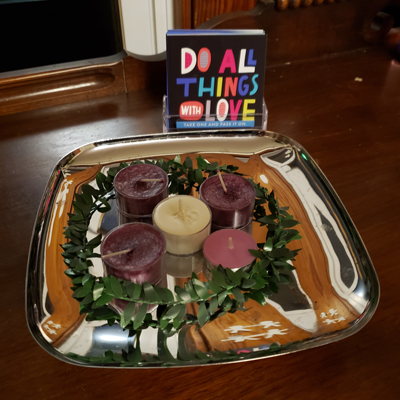 Here’s a finished Advent wreath, included in each of the 400 Advent kits sent out. (Photo courtesy of Johnsonburg Camp & Retreat Center)

After returning from an October road trip spent visiting other PC(USA)-related camps and conference centers, Johnsonburg staffers realized their vision of producing, assembling and distributing Advent kits was “overwhelming,” Alfieri said. Still, he volunteered to be the project manager.

“My first order of business,” he said, was “deciding upon a single, overarching concept idea to connect our inspired but separate ideas. We settled on the Advent wreath and set to work.”

Interns chose a week of Advent and the associated theme: hope, peace, love, joy and, finally, the Christ child. In a booklet distributed as part of the Advent kit, each intern defined the weekly theme grounded in their lived experience, two spiritual activities and a Chrismon design that best represented their chosen theme.

The team used mainly local sources for other materials for the kits, including an adobo mix from a restaurant distributor and candles from a nearby manufacturer.

Finally, he said, the team was ready to “print and pack.” 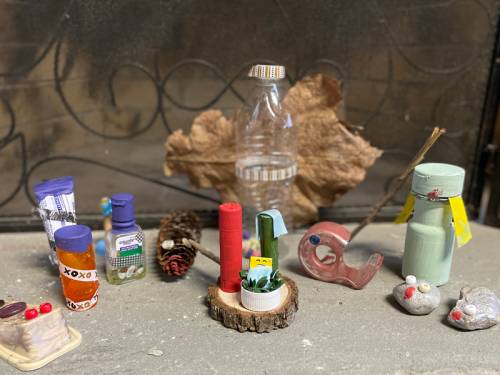 Each Advent kit also had instructions and some components for a “Found Nativity” scene. (Photo courtesy of Johnsonburg Camp & Retreat Center)

“We established an assembly line in the basement of our camp office, and over the course of three days packed over 400 kits,” he said. Each kit contained an Advent wreath and candles, a weekly devotional packet, a branded beanie, a digital songbook (a songbook with QR codes linking to videos), adobo spice mix (to accompany a recipe for fried plantains), origami paper and paper cranes, the necessary raw ingredients for a crayon candle, templates for Chrismon ornaments and a ‘Found Nativity’ set (instructions and some components for constructing a nativity scene from found objects). 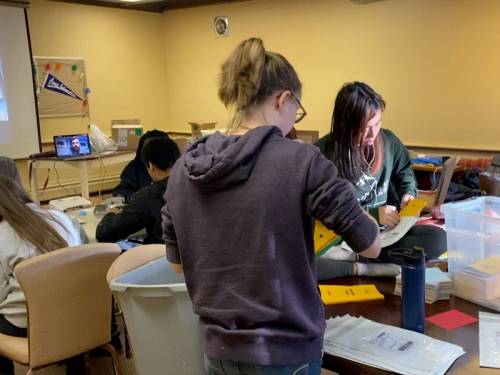 He called it “rewarding” to hear positive feedback from children and churches using the Advent kits.

“The Advent Kit is the largest and longest-term project that many of us have ever worked on,” Alfieri said. “It required that we all work together that we trust one another, and that we follow through on our promises. Our success opens space for more and for greater projects in the future.”

Bates Russell said that Johnsonburg interns “experience authentic Christian community while figuring out life. Similar to other communities around the world, the diversity of the participants, the setting of God’s Creation, and the daily work coalesce for an experience that stretches and promotes growth.” 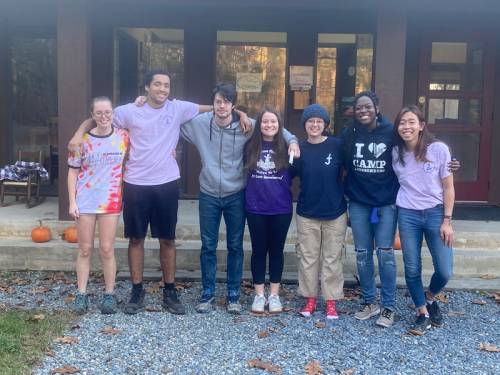 “It is with apprehension and great anticipation,” Alfieri said, “that we look forward toward our next Camper Connection brainstorming session.”

The Gap Year and Emerging Leader Internship programs at Johnsonburg provide an experiential opportunity to live in intentional community, understand the management of a nonprofit center, and discern the next steps in life. We are blessed to have seven young adults engaged in the community this school year (Sept. 2020-May 2021), and this project is a result of their dedication to the faith formation of all of God’s people. Visit the website to learn more about these programs at Johnsonburg.