The Amazon rainforest serves as Earth’s thermostat and lungs 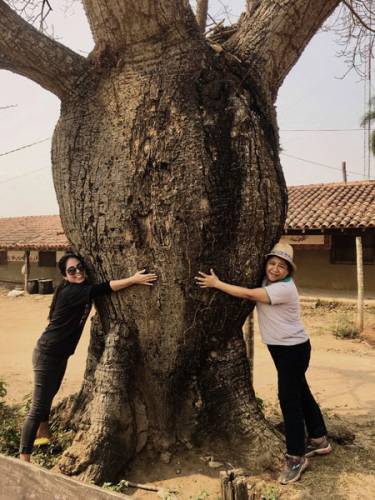 Yenny Delgado, at left, and Eva Esther Morales hug a toborochi tree, a “tree of refuge.” Native to South American countries, toborochi trees can grow up to be 55 feet tall and 50 feet wide. (Photo by Juan Castillo)

LA PAZ, Bolivia — Over the past few months, some of the world’s attention has turned to the burning of the Amazon rainforest with a primary focus on Brazil, which is home to over 60% of the primordial forest that serves as the thermostat and lungs for the planet. However, the burning and loss of forest lands in Brazil have also taken place in neighboring countries, including Peru, Bolivia and Paraguay.

Why is the forest burning? The burning is not due to global warming or power lines tipped over in drought conditions (e.g., the 2018 Camp Fire in Paradise, California). The forest is burning because it was set on fire to provide more land for farming and mining with a tacit blessing from the current government. However, because of changing weather patterns the fires have been more intense than in years past.

The impact of these fires continues to have a devastating effect, not only on the environment but also on the many indigenous communities that live in the affected areas. Last September, in collaboration with local religious leaders, I had the opportunity to visit a community struggling to recover. Though the narrative and media gaze have turned from those suffering to international power politics and unrest throughout America, those on the ground are still trying to regrow what was. 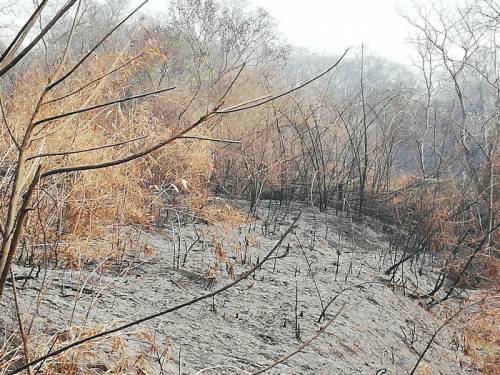 Deforestation of the single largest remaining tropical rainforest is a threat to all humanity. (Photo by Yenny Delgado)

This is the story of one affected community and how we can show solidarity to our brothers and sisters around the world.

The road was narrow along my journey to the Chiquitanos community in Bolivia, also known as the Monkóx community. The smell of ashen wood served as our guide and engulfed the fibers of our clothes as well as our skin and hair. The once blue sky was transformed into a gray post-apocalyptic vision of what destruction can bring. The Monkóx survived the invasion of the Europeans, who sought to exploit their labor and destroy their land. Today the Monkóx are now suffering as a result of the recent fires. They are struggling to find out who committed this crime, not only against nature but also against them.

What should we do?

We must remember first the church’s call: We are challenged by the cries of the people who suffer and by the woundedness of creation itself. We see a dramatic convergence between the suffering of the people and the damage done to the rest of creation. We have heard that creation continues to groan, in bondage, waiting for its liberation (Romans 8:22).
After the destruction comes the time for healing and reconstruction. Community members we talked with told us that when the fire goes out, the next job is going to be just as hard. They said we have to reforest, find water and keep the trees. Perhaps there is a need to dig wells for new water sources and make canals to ensure that the forest can grow.

In addition to the physical damage, there is also acute awareness of the trauma caused by the fires, as well as the need to learn from this tragedy. There was a sadness for the loss, a deep agony for nature. They said, “We have laws, ancestral rules of respect, and (we) protect the nature. But as a community we cannot control what outsiders do to our land.”

Reconciliation with Mother Earth requires recognition
Policies that seek unlimited growth and the current crisis are directly related to the development of neoliberal economic globalization, based only on the growth of wealth, without concern for the planet or its people. The price is very high and the resulting destruction to the planet will take hundreds of years to recover, if ever.

The suffering of the natives is not new. For many indigenous people around the world, the arrival of colonizing and Christianizing Europeans has led to massive sociocultural and environmental changes. Centuries have passed and the constant invasions of supposedly protected lands continue; many indigenous people struggle to have the right to exist in their homeland. 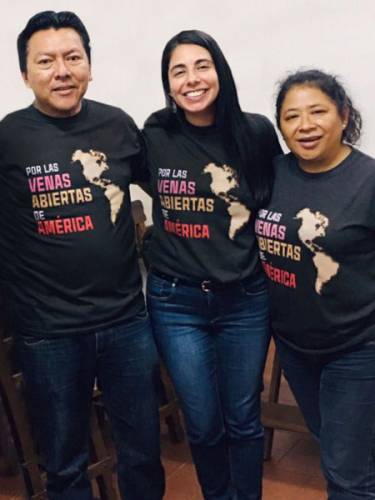 The author, in the center, is pictured with Juan Castillo and Eva Esther Morales. (Photo courtesy of Juan Castillo)

Not only does the destruction of the Amazon for government and corporate interest continue, but the desire that indigenous populations disappear so others can take possession of the land has led governments to commit massacres of leaders who have risen up as prophets. Native Americans want dignity and to remain present on the continent. Indigenous people have suffered a home invasion on a continental scale and have been relegated to natural environmental reservations. Now, even Native American reservations are being overrun for business interests (gas pipelines) in both the Amazon and Dakotas.

Undoubtedly, the Monkóx are a brave community. They were survivors of European colonization, and they are in this moment of pain and loss. The attitude adopted by the community is reminiscent of that shown by indigenous leader Mura, from Brazil, who said, “If necessary, I will use the last drop of my blood for this forest.” Showing the world, as well as politicians, that a true leader gives life not only for their people but for the world, “What really is life in the world without the Amazon?”

To address climate change and the destruction of the environment, we must recognize the struggle and the efforts of indigenous people to be the guardian of the land. We must assume responsibility to seek reconciliation and repair relationships. Our faith requires us to seek repentance, change policies, move to a more sustainable community and, above all else, to stand in solidarity with those who have suffered, before time runs out.

Yenny Delgado is a psychologist, theologian and social activist. She is co-founder of Umbrella Initiatives Foundation and has more than a decade of experience working with religious leaders, local governments and social organizations. She serves as a ruling elder at Bethesda Presbyterian Church in Maryland.

Mission Crossroads is published three times a year by Presbyterian World Mission. To subscribe free within the U.S. or to access the magazine’s archives visit pcusa.org/missioncrossroads.