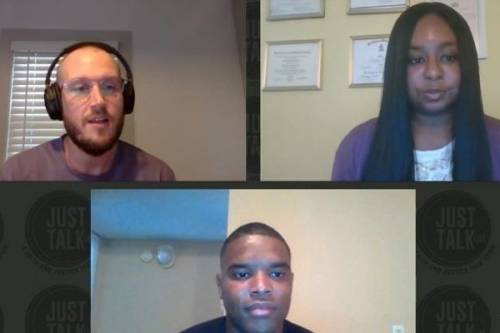 This week’s episode of the web series “Just Talk Live” featured Kuntrell Jackson, an activist who spent 16 1/2 years behind bars before a Supreme Court ruling opened the door for his release. Clockwise from the bottom are Jackson, Lee Catoe and Destini Hodges. (Screen shot)

LOUISVILLE — Arkansas native Kuntrell Jackson was 14 years old when he took part in the fatal robbery of a video store clerk in 1999, leading to a life sentence in 2003 without the possibility of parole.

Though he had not pulled the trigger or intended to kill, his fate was sealed until 2012. That’s when the U.S. Supreme Court issued a historic ruling, partly based on his case, that mandatory life-without-parole sentences for juveniles were unconstitutional.

Jackson, who was granted re-sentencing, was released from prison after 16 ½ years, opening the door to him becoming the activist, author and actor that he is today.

“It’s just a blessing that I was able to be freed,” Jackson said while appearing on the Presbyterian Church (U.S.A.) “Just Talk Live” show this week. “So many of us have been freed,” and others are still awaiting the process.

The groundwork for his release was laid by the Equal Justice Initiative (EJI), a nonprofit organization that provides legal representation to people who have been illegally convicted, unfairly sentenced or abused in state jails and prisons, according to its website. EJI also challenges the death penalty and excessive punishment and provides re-entry assistance to formerly incarcerated people.

“By the grace of God, He blessed me and EJI to cross paths,” said Jackson, a Black man who believes that skin color played a role in his original sentencing. Attorney “Bryan Stevenson and EJI took my case, and we made history.”

As a motivational speaker, Jackson now shares his story with young people, urging them to get educated about history, assume leadership roles in society and become informed voters. 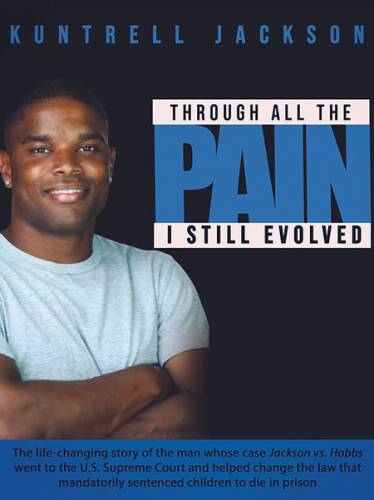 Kuntrell Jackson has written a book, “Through All the Pain, I Still Evolved.”

Jackson, who came from a broken home, also encourages youths not to replicate his early life, which included running the streets and stealing, while longing for his estranged father to be part of his life.

“All I wanted was my daddy,” he said. Instead, “I was destined to get killed or go to jail. That’s all my environment offered me.”

Just before the fatal shooting, Jackson had been hanging out with a friend and cousin when his companions decided to rob the store, with him remaining outside until the last few moments.

“I took one step in the store, and I said, ‘Man, I thought y’all was just playing,’ and boom! He shot her and killed her,” said Jackson, who was tried as an adult and convicted of capital murder. “I got life without parole because of a decision I made to stand outside that store instead of keep walking.”

Since gaining his freedom, Jackson has turned his life around, appeared in the 2019 film  “Just Mercy,” and found his life purpose, which he said is “to get out here and save as many kids as possible.”

It’s important to invest in them because “these children are our future,” he said. “I know this.”

You can watch the full show, which also addressed the death penalty, on Facebook. A listing of past shows can be found here.

“Just Talk Live” is a weekly web series from Unbound, the online Christian social justice journal of the Advisory Committee on Social Witness Policy and the Young Adult Volunteer program of PC(USA). Lee Catoe is Unbound’s managing editor and Destini Hodges is associate for recruitment and relationships for YAV.