Share God’s love with our neighbors-in-need around the world through One Great Hour of Sharing.
Make A Donation Click Here >
Home › A work of art on plywood urges Presbyterian Center staff, visitors to ‘Dream Big’ 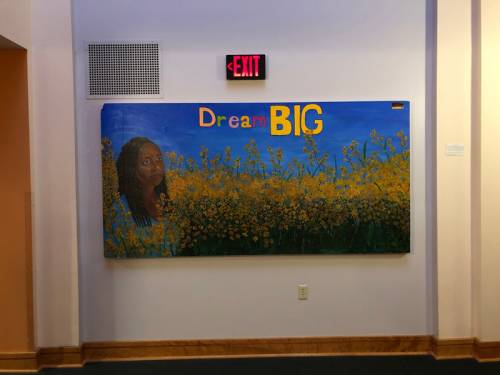 This mural, created on plywood by Louisville artist Tomisha Lovely-Allen, was installed outside the Chapel at the Presbyterian Center in Louisville, Kentucky. (Contributed phtoto)

LOUISVILLE — Tomisha Lovely-Allen was one of dozens of artists to transform the plywood that shuttered downtown Louisville businesses during last summer’s protests over the police killing of Breonna Taylor into inspiring pieces of art.

Lovely-Allen’s “Dream Big,” a 4-feet-by-8-feet mural, has been installed outside the Chapel in the Presbyterian Center at 100 Witherspoon St. in downtown Louisville, Kentucky.

“She did an amazing job painting on plywood,” said Kathy Lueckert, president of Presbyterian Church (U.S.A.), A Corporation, who arranged to purchase “Dream Big” at auction last fall for $200. “The plywood bears witness to a difficult and challenging summer in Louisville.”

“I wanted it to be true to my heart,” said Lovely-Allen, a Louisville artist, wife and mother of three high school students. “I believe the Bible for what it says. The Word of God is what I cleave to.”

But pulling off “Dream Big” was a stretch for her, she said.

“I’ve never done a mural before. I don’t usually paint at that scale, and I usually work on canvas,” she said. “And I generally work with oil, not acrylic.”

“I just thought, this will be a way to try it without committing to doing something to someone’s wall,” Lovely-Allen said. “I tried spray paint, but that’s not my thing. So I took them back to the store and pulled out the acrylics. It was haphazard, but I wanted to do something encouraging because of the time we are in, because of all the protesting and racial inequality.”

“I am a mom of three teenagers, and I wanted to create an opportunity for people to still dream in spite of all that, to have a vision,” she said. “My idea was to connect with life outside the trauma. That’s why it says to dream big.”

While some people “would like to move on” from the protests over racial inequality, “there are a lot of wounds that still exist,” Lovely-Allen said. “A lot of people are still hurting, so it’s not something you move past quickly … Healing is almost impossible without change. While we can’t change our skin color, it would be nice to change the perspective of who we are beyond our color.”

As for the woman in the mural, “I referenced myself” after taking a few selfies, she said. For the remainder of the foreground, Lovely-Allen considered both flowers and a skyline before settling on row after row of black-eyed Susan, which in her eye “evoke hopefulness.”

Lueckert said she first heard of the auction to sell the plywood pieces of art through an article in the Louisville Courier Journal newspaper.

“I thought it would be great if PC(USA) could acquire one of the art works in recognition of the difficult year of 2020 and the protests,” she said. “My thought was it could be a permanent reminder of 2020 and the impact the year has had on Louisville.”

Lueckert said that Denny Harrold, who works in the Presbyterian Center’s Distribution Center, picked up the art following the auction. Jon Baxter of Building Services built a frame for the new piece. He and Gil Herbig of Building Services then mounted it on a wall outside the Chapel.

Lovely-Allen said she’s looking forward to seeing the spot where her artwork has been installed.

“I feel responsible for my art to represent and reflect my beliefs, and to try to stay true to what God would want me to reflect on,” she said. “I believe it’s a gift God gave me. I hope it can encourage and inspire the people who see it.”

See more of Tomisha Lovely-Allen’s work at her Instagram site here and her art studio site here. She’s participating in the Art Center of the Bluegrass exhibition “The Art of Being Black: Conversation and Experience” from Jan. 11 through March 31. She’s contributing to the  “Momentum” and “Call and Response” exhibitions. Learn more here.