The Kurtz sisters, winners of Presbyterian literary prizes this year, offer their thanks and discuss their ‘mish kids’ upbringing 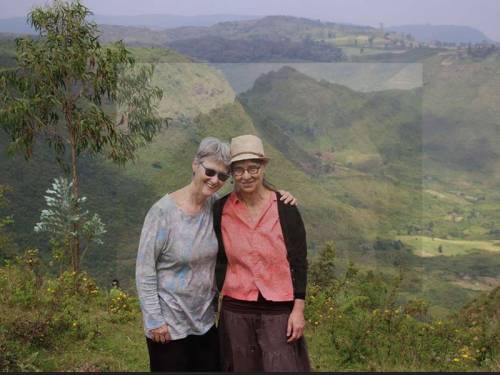 LOUISVILLE — Honored through many miles of social distance earlier this year for their selections by the Presbyterian Writers Guild as the David Steele Distinguished Writer Award winner and Best First Book winner, Jane Kurtz and Caroline Kurtz have responded with an audio thank-you card that connects growing up as missionary kids with the literacy and other work to which they’ve been devoted as adults.

“We’ve been at home in the Presbyterian Church from the time we learned to walk,” Caroline Kurtz says in the sisters’ acceptance speech, posted on the website of her publisher, Catalyst Press.

The Kurtz sisters are daughters of former Presbyterian mission workers Harold and Polly Kurtz, who served in Ethiopia from 1955 to 1977. Before attending Pittsburgh Theological Seminary, Harold Kurtz was an Air Force pilot during the Second World War.

“World War Two changed his life forever,” Jane said. “He said that when he got back, the world was on his heart.”

Emperor Haile Selassie returned to Ethiopia following the war “to find that the Italian occupation had killed the whole generation of educated Ethiopians,” Caroline said. “And so he invited Presbyterians to expand their work in Ethiopia,” an invitation that Harold and Polly Kurtz accepted.

“Nobody,” Jane noted, “solicited our opinion about going to Ethiopia.”

“But we loved our childhood in Ethiopia — especially after we moved to Maji,” said Caroline.

“In Maji, the Presbyterians ran a clinic and a school — but we didn’t go to that school,” Jane said. “Instead, we learned to read from our mom who loved to read. So we learned to love reading also.”

“We made up stories and used our imaginations in one of the most beautiful spots on God’s Earth,” Caroline said.

One year decades later, Jane said, American Girl asked her to write stories for the company’s doll of the year. “They wanted the character to be a girl who loved science and who wanted to save the Earth,” she said. “I thought about my own childhood in Maji, loving the Earth. And that helped me create Lanie, who realizes the power of her own backyard to save birds and bees and butterflies.”

Caroline said she returned to Ethiopia during the 1990s to teach. “What a great follow-up to my childhood there!” she said. She next worked for the Presbyterian Church of Sudan, teaching teachers, working with women and organizing a peace conference between chiefs and community leaders in South Sudan.

These days, “I’m collaborating with the community of Maji again, this time with my own nonprofit. I’m bringing women’s development. I’m introducing solar electricity to run water pumps, light operating rooms, keep vaccines cold and brighten family homes at night. So, for me, the adventure in Ethiopia continues.”

Jane said she didn’t return until 1997, the year the community where she then resided — Grand Forks, North Dakota — was hit by a terrible flood. The session of the church she attended “decided that we needed some kind of a project to turn our eyes out to the world. And that’s how I came to help start the nonprofit Ethiopia Reads,” which has since planted 80 public, school and mobile libraries and serves 100,000 children each year.

“You know,” she said, “Caroline and I learned how to read in English. All people love their own languages. And if you can learn to read in your own mother tongue, it makes a huge difference.” 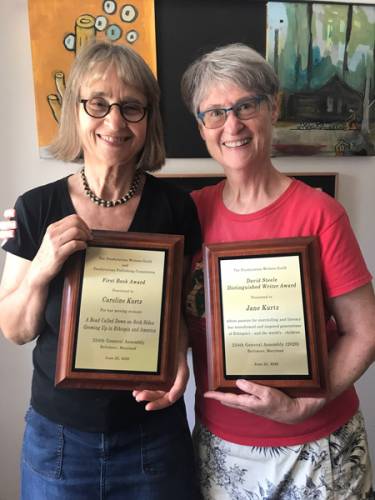 The daughters of longtime Presbyterian missionaries, Caroline and Jane Kurtz will be formally honored for their Presbyterian Writers Guild awards during the 225th General Assembly (2022) in Columbus, Ohio. (Contributed photo)

“We kind of dreamed up the idea in 2016 when we were traveling with some other writers and some artists down to Maji,” Jane said. “We brainstormed together how to create books that would show children their lives in Ethiopia — that would be in their own languages — and that would show them the power of books to change lives.”

She called the project “our thank-you — a reading thank-you — to a place where we learned how to read and learned to love reading.”

“Janie and I have been companions and collaborators pretty much all of our lives during the good times … during the awkward times … and up to the present,” Caroline said. “We have had a life full of adventures and companionship very much due to the Presbyterian Church and our connection with Ethiopia.”