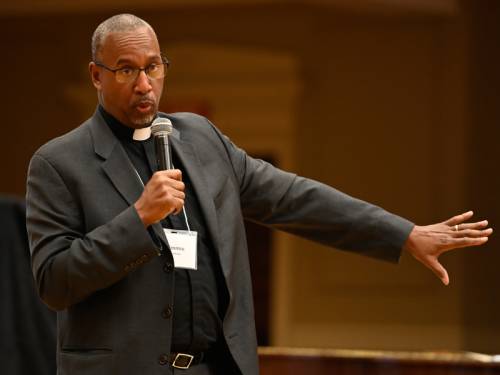 The Rev. Jimmie Hawkins directs the Presbyterian Church (U.S.A.)’s Office of Public Witness and is Associate for Advocacy for the PC(USA)’s Compassion, Peace & Justice ministries  (Photo by Rich Copley)

LOUISVILLE ­— Three weeks ago, the Rev. Jimmie Hawkins’ 17-year-old daughter announced to her father she wouldn’t be attending seminary.

“Every time I ask you a question,” she told her father the seminary graduate, “you don’t have the answer.”

“It’s not about having the answers,” said Hawkins, Associate Director for Advocacy for the Presbyterian Church (U.S.A.)’s Compassion, Peace & Justice Ministries, who also directs the Office of Public Witness. Hawkins spoke online Saturday to the 25 graduates at Union Presbyterian Seminary’s Richmond campus, their families and well-wishers, and the seminary’s faculty and staff. “It’s about being a living witness to the love of God to those who feel unloved.”

Hawkins delivered a stem-winder commencement address to the graduates of the institution where he earned a Master of Arts in Christian Education in 1986. UPS President Dr. Brian Blount called Hawkins, a former seminary trustee, a “relentless servant” who “causes holy trouble as a result of his call from the Lord.”

Hawkins used Matthew 4:23-25 as his scriptural basis and labeled his talk, “A Call to Preach, Teach and Heal.” Just as Jesus did all three throughout Galilee, seminary graduates are also called to undertake what Hawkins called “this trifold of ministry.”

Whatever career path graduates choose — pastor, an additional graduate degree or work in the nonprofit world — “your theological training sets you apart as one who can help others in their search for meaning,” Hawkins said.

“Your words should lift people up who have been beaten down,” he said. “You must address the sins of the day” and decry racial injustice, misogyny and LGBTQ discrimination, he urged.

As healers, “you must expand [people’s] understanding that healing goes beyond charity and extends to advocacy, because the system needs repair,” he said. Systemic poverty and structural racism “are not just utterances of a political correctness. They disrupt the natural flow of life, crippling men, women and children from fulfilling their capacity to be whole.”

Books like Robert P. Jones’ “The End of White Christian America” have analyzed the anxiety brought on by societal change and the resulting “politics of nostalgia” that many white Christians experience. According to Hawkins, Jones “urges white Christians [PC(USA) membership remains at more than 90% white] to adapt the new reality rather than trying to recapture a world that is never returning.”

As if any proof were needed, Hawkins cited Coca-Cola’s Super Bowl ad in February featuring a multilingual rendering of “America the Beautiful,” sung by a diverse group in nine languages. Among “this diverse collage of faces” were the first gay dads depicted in a Super Bowl ad, which Hawkins figured would lead to controversy.

Not so, he noted. Most people angry with the ad “were upset about the singing of ‘America’ in different languages,” Hawkins said, quoting a former congressman: “If we cannot be proud enough as a country to sing ‘American the Beautiful’ in English in a commercial during the Super Bowl, by a company as American as they come — doggone, we are on the road to perdition,” said former U.S. Rep. Allen West.

On the other hand, right-wing political pundit Erick Erickson told his radio followers the ad was well done, pointing out that “E pluribus unum,” the nation’s traditional motto, isn’t in English either.

Union Presbyterian Seminary responded to the nation’s struggle for race equity, Hawkins noted, by announcing in December it would create a $1 million endowment fund to “recognize and repent the resourcing” provided to the seminary through the labor of enslaved persons. The money will support the ministry of the seminary’s Katie Geneva Cannon Center for Womanist Leadership.

“Not every Presbyterian nor alumnus thought that this was a good idea and not the right time,” Hawkins said. “But this is the call you have been given: to continue to move forward, to use the resources God has placed at your disposal to atone, to repent, to heal and reconcile the world.”

“Just as you have come out of the pandemic a different kind of disciple,” Hawkins told graduates, “so shall the Church.”

“The Church you go forth to serve will not be the same one you encountered when you began seminary,” Hawkins said. “The Church has demonstrated that it’s nimble, more so than anyone could have imagined. COVID did not destroy the church, but demonstrated the resiliency of people of faith, who are not as rigid as people might have imagined.”

However, he said, “If our congregations expect our churches to grow, they are going to have to reflect the diversity of their neighborhoods. If our denomination hopes to remain relevant, it must diversify in both leadership and constituency.”

Not only must the Church respond, “but all our institutions” must respond as well, he said. “Young people today are immersed in social justice protest and want their institutions to make a difference in the world.”

“Know this,” he told graduates near the end of his address. “You have received everything you need at this particular moment of your life. “You can share God’s forgiveness as something you have experienced firsthand. God has blessed you with compassion, gifts, abilities, insight, intelligence, faith, and yes, imagination and love.”

“Share with those who have never heard a minister speak as you will,” he suggested, “who never experienced a teacher with your insight and willingness to proclaim what God has revealed.”

But most of all, “trust in God, and proclaim that ‘I am not ashamed of the gospel of Jesus Christ, for it is the power of God to everyone who believes.’ God bless you! Amen.” 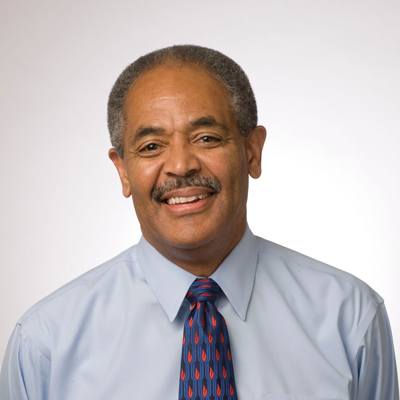 “You have been the class that has done so valiantly throughout the pandemic,” Blount told the Class of 2021 during his charge to them. In the Bible, Blount said, the wilderness, especially to the wandering Hebrew people and to Jesus, “portends something beyond the struggle — a new home, a new ministry that would change the world now and forever.”

“You are now on the precipice of launching into promise. Launch boldly,” Blount said. “Lean into it like the people walking into the Promised Land, like Jesus walking into Palestine, like you walking into the church and the world.” Go, he said, in God’s mystery, God’s joy, God’s calling and “go with God’s promise.”

The hour-long ceremony concluded with a moving reading by the faculty of Psalm 139:1-18 (“O Lord, you have searched me and known me … such knowledge is too wonderful for me … I praise you, for I am fearfully and wonderfully made …”).