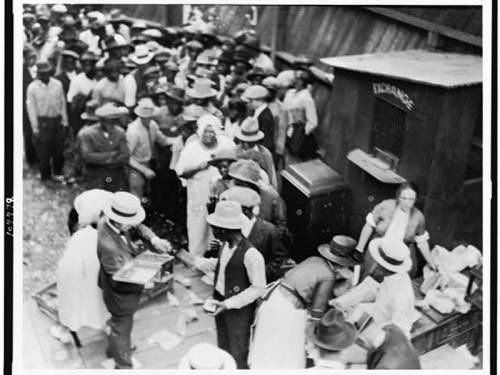 A crowd of African Americans, some standing in line next to the Exchange booth, receiving food from relief workers after the Tulsa race massacre, when a white mob attacked the predominantly African American Greenwood neighborhood of Tulsa, Oklahoma, in 1921. (Photo courtesy of the Library of Congress)

LOUISVILLE — There’s no doubt that the Tulsa race massacre was one of the most reprehensible moments in the history of the nation.  Known as America’s “Black Wall Street,”  the Greenwood district of Tulsa, Oklahoma was burned to the ground in the Tulsa race massacre on May 31 and June 1, 1921, in which white residents massacred as many as 300 Black residents, injuring hundreds more, and leaving 5,000 people homeless. As the country commemorates the 100th anniversary of the massacre this week, the situation begs the question: Were was the church and what was the church’s role in the ensuing events?

According to Hannibal B. Johnson , an eminent historian and author of four books related to the 1921 race massacre, including “Black Wall Street: From Riot to Renaissance in Tulsa’s Historic Greenwood District” and “Black Wall Street 100: An American City Grapples With Its Historical Racial Trauma,” the run-up to the massacre was a  tinder box or a powder keg that needed only an ignition to set the community alight.

“And that catalyst, that igniter, that match, was an incident that involved two teenagers: a 19-year-old Black  boy whose name was Dick Rowland, he shined shoes for a living downtown, [and] a 17-year-old white  girl whose name was Sarah Page, who operated an elevator manually in the Drexel Building, downtown,” said Johnson.

While no one knows for certain what happened on the elevator, it is likely that Rowland innocently bumped into, brushed up against, or stepped on the foot of Sarah Page.  Following Rowland’s  arrest, the Tulsa Tribune ran a front-page story reporting that police had arrested Rowland for sexually assaulting Page. It is believed that the newspaper’s inflammatory headline, “Nab Negro for Attacking Girl in an Elevator,” was the key contributor to the false information leading up to the events ending in the massacre.

During the height of the chaos, Johnson says many Blacks were rounded up and put in internment centers, “very much like people of Japanese ancestry were interned during World War II.”

Today there are two churches that still exist in downtown Tulsa that were extraordinarily helpful in the aftermath of the massacre. First Presbyterian Church and Holy Family Cathedral provided post-massacre relief such as food, shelter, clothing, and other necessities.

According to Johnson, First Presbyterian Church and its pastor, Dr. Charles William Kerr, who became the pastor there in 1900, and his wife, Annie Elizabeth, not only showed extraordinary compassion during the massacre but extended help after the massacre as well.

“Dr. Kerr is really an unsung hero in all this,” said Johnson.  “At great risk to his career and perhaps his life, he really supported members of the Black community. I think it is because he had real relationships with Black folks, particularly Black folks who were ministers in the community, in the Greenwood community.”

“So, when he got word that a mob was amassing and that there might be some sort of disturbance, he had his son drive him downtown,” Johnson said. “He actually addressed the white mob and really urged them to calm down and to return home. He was obviously unsuccessful, but he did it anyway. That’s truly amazing.”

In Johnson’s book on historical racial trauma, the author notes that Kerr walked to the courthouse steps and announced to the crowd, “You may kill [Rowland] but you will have to kill me first.” 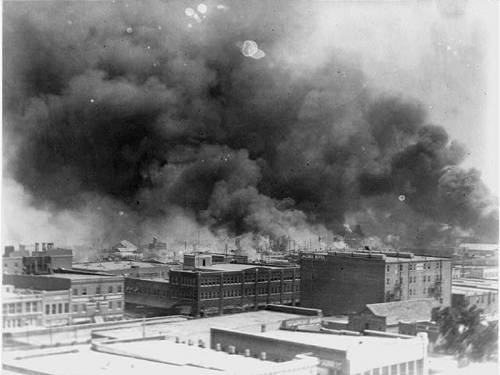 Burning buildings are pictured during the Tulsa race massacre. (Photo courtesy of the Library of Congress)

“After the massacre, he opened his church and really and did a lot of relief in terms of food, shelter, clothing,” said Johnson.  “During the disturbance, his wife sheltered a man who was fleeing the mob.”

According to Johnson, an African American man knocked on the Kerrs’ door and told her that her husband was being hunted by this mob. “She allows him [in]. She takes him to the kitchen. She hides him under the sink in a narrow, tight crawl space. Members of the mob actually come knocking on her door. She welcomes them in and offers them food and drink and says, ‘Oh, please, by all means you’re welcome to look around,’” said Johnson.

“They do look around [and] are satisfied. They leave. She goes back into the kitchen. She opens the cabinet underneath the sink to let the man out. He’s soaking wet, and she apologized profusely because she didn’t realize that she had a leak in the sink, or she wouldn’t have put him down there. In fact, she did not have a leak. He was soaked in sweat because of the anxiety of being hunted by this brutal mob,” he said. 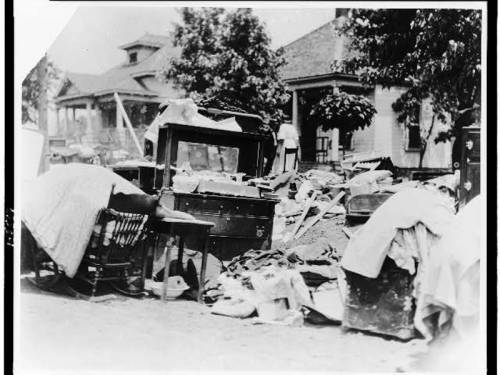 Furniture and other destroyed property dumped in the street during the Tulsa race massacre. A Presbyterian pastor, Dr. Charles William Kerr, pastor of First Presbyterian Church in Tulsa during the time of the race massacre, unsuccessfully sought reparations for the victims. (Photo courtesy of the Library of Congress)

Johnson noted that Dr. Kerr actually was interested in the idea after the massacre of reparations. Johnson says Kerr raises that concept, and drafts a petition to Congress saying, “This is wrong. Something has to be done about the damage that was done to the Black community.”

“It doesn’t ultimately go anywhere as you might imagine,” said Johnson. “It’s 1921, but the fact that he did it and there were murmurings in his church that he needs to be replaced. He’s gone too far, but he was so popular and had so many great ties in the community, generally, that he was ready to go if they wanted him gone. But they decided they didn’t want him gone after all. This is a remarkable, remarkable man that we ought to know more about,” said Johnson. The Presbyterian pastor, who was the first Protestant pastor in Tulsa, remained in his pulpit until 1941,

According to the Presbyterian Historical Society, Dr. Kerr by all accounts remained affronted by the massacre, and during the next few months uncovered fissures within his own congregation. First Tulsa considered organizing a mission church in Greenwood, but tabled the idea, noting that “the colored people of this city have so many churches already.” Kerr attempted to get his congregation to support a congressional inquiry into the massacre; the membership declined. Over the next few years, as the Ku Klux Klan mobilized to ensure that Black Tulsans never recovered the economic prosperity they had prior to 1921, Kerr would be invited several times to join “benevolent associations” or “anti-vice groups,” invitations he declined. The friends and family of Greenwood’s laundresses, routinely called upon to wash the white robes of the Night Riders, would come to Kerr with Klansmen’s names, among them members of his own congregation.

As supportive of the Black community as Kerr was, according to the Phoenix Tribune, an African American newspaper in Arizona, Kerr and a number of other Tulsa church leaders were said to have given sermons soon after the massacre blaming the Black community for the death and destruction of Greenwood. The Center for Public Secrets reports that Kerr thought that “successful Blacks” of the kind who built Greenwood “couldn’t expect to be tolerated.”