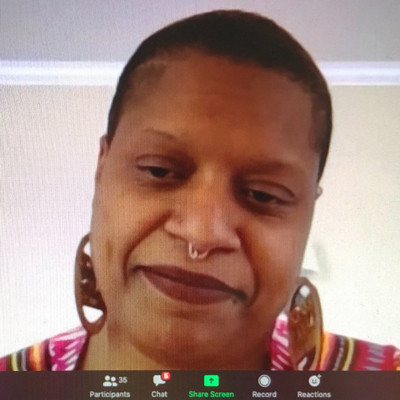 The Rev. Denise Anderson preaches during Wednesday’s service of lament.

LOUISVILLE — During the Vital Congregations lament worship service Wednesday, nearly 50 participants were asked if they were willing to weep if they saw a sibling in pain — or if they were just content to be a lens.

Preaching from John 11:28-37, the Rev. Denise Anderson, coordinator for Racial & Intercultural Justice in the Presbyterian Mission Agency, built her message around the biblical story of Jesus weeping over Lazarus’ death accompanied by others in mourning — and the story of photojournalist Kevin Carter.

In 1993, Carter captured the collapse of a Sudanese toddler as she tried to make her way to a nearby food camp and the vulture who was waiting for the child to die. Despite receiving criticism for exploiting the child while stalking his young subject for 20 minutes trying to find the perfect shot, Carter won a Pulitzer Prize for his photograph the following year.

Anderson said Carter was often conflicted about whether he should step in and help as he photographed public executions, shootouts and violent killings in progress. But the rules of photojournalism were clear — don’t step in. Maintain a professional distance.

“He wasn’t allowed to be a fellow human,” Anderson said. “He was a lens.”

Less than a week after Carter was awarded the Pulitzer Prize, his colleague and friend Ken Oosterbroek was killed while photographing in apartheid-era South Africa. That same year, Carter, who suffered from clinical depression, died by suicide.

Anderson told Carter’s story to illustrate this point: it’s difficult to be acquainted with the suffering of others and not be affected by it.

She said understanding this reality makes it even more poignant that Jesus would step into our human condition with all its suffering, and that he would return to Judea to “wake up” his friend at the very place where Jesus had recently escaped being stoned to death.

Even Thomas, one of Jesus’ disciples, said, “Let’s also go, that we may die with him.” Anderson said Jesus returned willingly because he was needed.

Upon arriving, when Jesus saw the suffering of Lazarus’ sisters and the anguish of the community, he wept. It’s likely, Anderson noted, that many of the same people who were ready to kill him were present during the mourning as well.

“Jesus cried because he identified with the pain of both his beloved friends and enemies,” she said.

As Jesus mourned with his supporters, who were impressed with his care, and with his detractors, who were cynical about his power, Anderson said Jesus saw an opportunity to give glory to God. By waking up Lazarus, everyone — including the detractors — was amazed and believed.

Suggesting that the miracle in this story is that Jesus wept, Anderson said when he saw Mary’s anguish and the pain and mourning of those around him, he wasn’t so high a being or a person that he wouldn’t be affected by human suffering.

“And because he was affected by, and now acquainted with, the intense suffering, there was simply no way he could not have done something,” she said.

Seeing someone’s pain “is more than just being a lens,” she said. “It’s being moved to action.”

The Rev. Dr. Kathryn Threadgill encouraged worshipers to voice their prayers of lament during the Vital Congregations worship service.

As Anderson spoke of serving a God who weeps and is then motivated to act because of profound love, she asked, “What about us? Are we touched by the suffering of people around us, or are we content to just be a lens? Or worse yet, are we content to refuse to even see what’s around us?”

Then, before worshipers were encouraged to offer their own prayers of lamentation before God, Anderson began a series of “if only” statements:

“If only we had been here — truly present with our siblings as fellow creations in the image of God — we would not be currently mourning the deaths of 114,000 Americans to COVID-19 — a disproportionate number of them being black and brown.

“If only we had been here, Breonna Taylor would still be here, or we would at least have honest answers about why she isn’t.

“If only we had been here, George Floyd would still be breathing and our renewed fire for justice would not have come at the expense of his life.”

She then asked these questions:

The Rev. Dr. David Gambrell, an associate for worship in the Office of Theology and Worship, facilitated the lament service, with planning help from Vital Congregations associate the Rev. Carlton Johnson and VC mission specialist Monique Rhodes, who also offered music.

“While there is much to lament in this season of the church’s life — sickness and death, isolation and division, financial struggles and the lethal legacy of systemic racism — as people of faith we give voice to our grief in prayer, trusting in God’s transforming grace,” Gambrell said.

The Rev. Carlton Johnson led the singing of “Lift Every Voice and Sing” during the Vital Congregations lament service.

For Vital Congregations coordinator the Rev. Dr. Kathryn Threadgill, now more than ever is the time for the people of God to come together to lament over all the injustices and tragedies and in hope for what God is up to in transforming our communities, nation and world.

“We trust that the Spirit of God will be with us in our worship and in our going forth,” she said.

To listen to the Vital Congregations Service of Lament, including the Rev. Denise Anderson’s message “If Only,” click here.