Make A Donation Click Here >
Home › A paintbrush in one hand, the Bible in the other 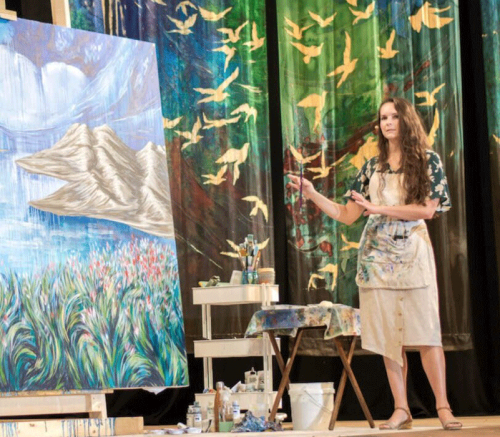 LOUISVILLE — Far from “the peaceful easy feeling we experience when all is well and all is right,” God’s peace is “something really robust and active,” a peace “that is the most present in the presence of pain, in the hardest moments of my life, in situations that feel impossible.”

Those were among the insights provided by the Rev. Lisle Gwynn Garrity, the founder and creative director of A Sanctified Art, who was the guest of Special Offerings’ Bryce Wiebe and Loren Rogers on Between Two Pulpits, which was recorded and later uploaded due to Monday’s Facebook outage. Watch their 36-minute discussion here.

Gwynn Garrity discussed peace, worship, the creative process and her thoughts on the gospel lesson in Sunday’s lectionary, the story of the rich man asking Jesus what he must do to inherit eternal life as told in Mark 10:17-31.

Since God’s peace has a robust quality, peacemakers must be robust and active too, she said. Making art — Gwynn Garrity often paints during worship or in conferences and workshops in front of God and everybody — requires a similar effort.

“The creative process for me is often deeply tumultuous,” she said, often requiring “a lot of surrender to the initial vision that I thought I had.” It comes about in four stages: birth, life, death and “if we are persistent enough and resilient enough,” a resurrection stage.

“I go through those cycles with every painting, every creative endeavor,” she told Wiebe and Rogers. “That’s also the story of our faith: birth, life, death, resurrection.”

Gwynn Garrity called A Sanctified Art a “collaborative cohort” of visual artists and pastors, writers and theologians who work with “an increasing group of guest collaborators to create multimedia resources for worshiping communities around the world,” primarily for liturgical seasons, especially Advent and Lent.

“We are stirred by what is happening in the world, the issues of justice that are impacting our communities,” she said. “That should infiltrate the expressions of what we create and offer to others.” 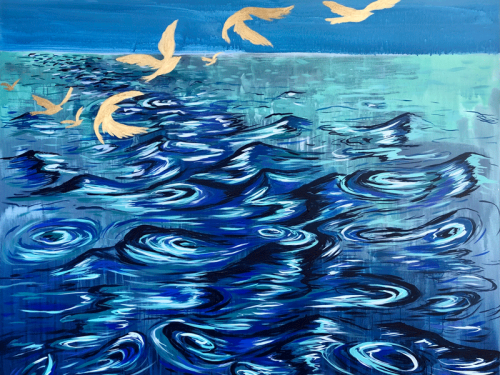 During the broadcast, Gwynn Garrity shared two pieces of art. She created the first, “In the Deep,” during worship services at First Presbyterian Church in High Point, North Carolina. It’s intended for people “who feel stuck in the depth of a really difficult season that feels impossible,” including family tensions and dismal diagnoses, “that feeling of trying to stay afloat in the current.”

Asked to select the lectionary text she’d preach on during worship on Oct. 10, Gwynn Garrity chose Mark’s account of the rich man questioning Jesus, the version that includes the action of Jesus looking at him and loving him. To illustrate how stuck this man was, Gwynn Garrity discussed a painting by her colleague at A Sanctified Art, the Rev. Lauren Wright Pittman, the founding creative partner and branding director who painted “Finding Release” to help illustrate A Sanctified Art’s resource, “Our Money Story.” 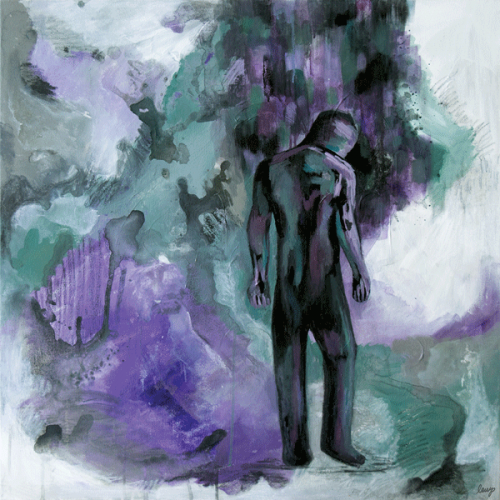 “Finding Release” by the Rev. Lauren Wright Pittman was created for A Sanctified Art’s “Our Money Story.” (Photo courtesy of Lisle Gwynn Garrity)

“Jesus sees what [this man] doesn’t have and invites him into something deeper, which is, ‘Come, follow me,’” Gwynn Garrity said, to the place where he’ll find true belonging, true connection and true community. “His possessions are a barrier, and so Jesus invites him to remove that barrier. But he can’t, and he goes away grieving.”

If the story were “flipped toward me, what are the barriers I have set up that prevent me from being truly in touch with community and from belonging, from truly seeing my neighbors?” Gwynn Garrity wondered. “We might have to release those barriers to find a fuller and deeper life.”

When we’re afraid, we turn inward, Gwynn Garrity said, reading from Pittman’s artist statement on her painting. The man’s wealth affects others, particularly those on the margins of society. What Jesus can give him is freedom from entanglement with his wealth, offering him a way forward.

“Jesus may be calling his bluff, saying, ‘This is the thing you lack,’” she said. The man “saw the cost but not the gift, the gift of community — not just having, but sharing.”