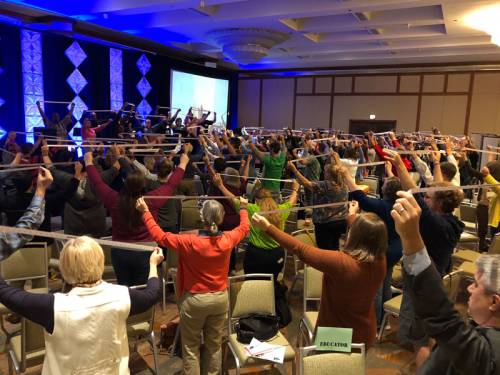 People attending the national gathering of 1001 New Worshiping Communities and Vital Congregations were asked to accept the Three-Foot Challenge: Listen to three stories within three feet of them in three days. (Photo by Paul Seebeck)

“In Missouri and Kansas,” she said, “they actually had churches that attacked each other during the Civil War.”

Believing that the churches need to have difficult conversations in these tumultuous times, the interim director of Heartland Presbytery invited the Rev. Dr. Gregory Ellison, founder of Fearless Dialogues, to come and work with attendees at a presbytery meeting.

With that, after encouraging the 220 national gathering attendees to “stay engaged with a truly transformative process,” she introduced Ellison as the keynote speaker at the joint gathering of two ministries within the Presbyterian Mission Agency. 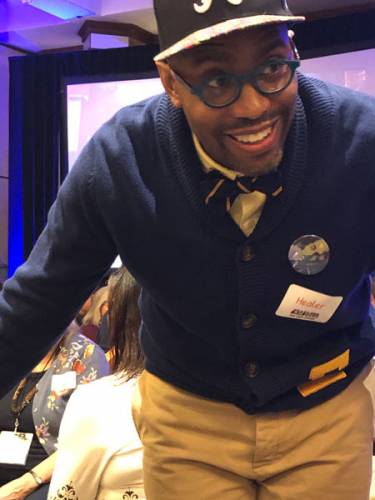 The first thing Ellison did was divide the gathering into groups of five — based on one of the five gifts they had chosen that represented them best: activist, connector, educator, healer or neighbor.

And then along with colleague Floyd Wood, Ellison went around the ballroom, looking every single person in the eye, saying, “It’s good to finally see you.”

Fearless Dialogues began six years ago, after Ellison’s book, “Cut Dead But Still Alive: Caring for African American Young Men,” was published. Based on the dissertation he worked on at Princeton Theological Seminary, the book includes his experiences working with young black men on Princeton’s campus and young people coming out of prison in Newark, N.J.

Both groups told him about the experience of being seen myopically, which left them feeling unseen and unheard — invisible.  Being cut dead by others who deliberately refused to acknowledge them with intent to punish, Ellison argues, is the plight of African American men.

The book was released right after George Zimmerman was acquitted of all charges in the fatal shooting of Trayvon Martin. Suddenly, Ellison was doing numerous media interviews. On the NPR station in Atlanta he was asked to give an answer in 20 seconds. He invited those listening to come to Emory University to have a hard conversation about race.  More than 400 people showed up, including one person who told him it was the first time he’d been given the space to share his story without feeling judged.

Out of that impromptu gathering, Fearless Dialogues grew into an organization that is now based on three principles: truly seeing and hearing each other, seeing what’s on the inside and not the outside, and creating spaces for the Spirit of God to work.

Then Ellison read this 1890 quote by William James, which he included in “Cut Dead But Still Alive”:

“No more fiendish punishment could be devised, were such a thing physically possible, than that one should be turned loose in society and remain absolutely unnoticed by all the members thereof. If no one turned around when we entered, answered when we spoke, or minded what we did, but if every person we met ‘cut us dead,’ and acted as if we were non-existent things, a kind of rage and impotent despair would before long well up in us, from which the cruelest bodily torture would be a relief.”

“How does that make you feel?” Ellison asked.

“Angry, sad, sick to my stomach, lonely, it was intentional,” were some of the replies heard in the Westin Hotel ballroom.

Then Ellison asked each group to remember a time they felt cut dead and to describe what it felt like it.

In one circle, Nidia Hernandez said she “felt pain, but also oddly compassion for those who can’t see me for whatever reason because of fear.”

Hearing that last one, Ellison said that people who feel invisible have different ways of lashing out. Some want to hit the person.

“I saw this constantly during my prison visits,” he said. “’I’m going to hit you. Now do you see me?’”

But he also sees this in the church, when a member disrupts every meeting. “Now you’re going to see me!” he said, for emphasis.

People cut dead generally feel pessimistic, or they despair.  They’re more susceptible to depression and to hurting themselves.

“You know what that feels like, based on what you remembered,” Ellison said. 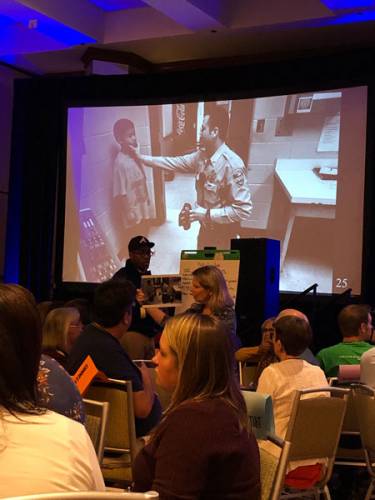 The Rev. Dr. Gregory Ellison asked attendees to look at photos and discuss them in small groups. (Photo by Paul Seebeck)

Then asking everyone in the room to break into groups of two, Ellison encouraged each pair to see one other soul to soul — based not on their roles but on the gift they’d chosen when they first walked into the ballroom.

“Now I want you to take a long, loving look at each other,” he said.

After each person did that — for what seemed like an eternity — each was asked to describe how they felt being seen and what they saw.

“The most common response to being seen from the 70,000 people we’ve spoken to around the world is ‘awkward,’” Ellison said.

And while there were some in the room who said they felt “connected,” “affirmed” and “peaceful” at being seen, some of the words that came from those describing what they saw were even more hopeful.

In closing, the Fearless Dialogues team asked attendees to hold high a three-foot paper measuring tape they’d been given.

As they did, they were encouraged to take a look at how they might create change by listening to the stories of those who are within three feet of them.

“You felt awkward being seen, but also affirmed,” Ellison said.

“Imagine what our world, our family and our churches would look like if we truly saw and heard people’s gifts,” Ellison said, “and listened to their stories as we remember what it felt like to be cut dead.”

The 1001/VC gathering, Perspectives: The Church… Then… Now… Beyond wraps up on Wednesday night. It’ll be followed by two post conference events on Thursday morning.

1001 New Worshiping Communities and Vital Congregations are ministries housed within Theology Formation & Evangelism of the PMA.