Editor’s note: Since this story was written, Wayne Gnatuk and Cynthia White have retired. 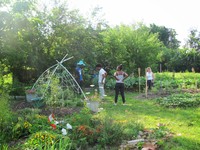 A community garden in the Hough neighborhood of Cleveland, Ohio, is blossoming sooner in the year than usual because of Presbyterians and the local Self-Development of People Committee there in the Presbytery of Western Reserve.

For anyone interested in the Urban Garden scene and the potential for increasing the availability of fresh healthy foods for city dwellers, Cleveland is an exciting place to be.  In the last decade empty lots around the city have become sources of fresh produce; CSA options have increased all over town, including those that operate on a sliding scale and accept SNAP benefits; there’s a farmers market happening somewhere on just about any day of the week.

The Presbytery of the Western Reserve SDOP committee has been part of this growing commitment to better eating, having funded several community garden projects over the years.  A recent recipient was City Rising Farm, a community-run garden and education center located in the Hough neighborhood of Cleveland.  City Rising Farm provides garden plots for local residents, manages a garden specifically for young urban farmers, and offers a variety of agricultural education classes around the city, including lessons on how to preserve foods by canning or freezing. Through a grant from the Presbytery’s SDOP Committee, City Rising Farm was able to erect a hoop house, or “high tunnel,” thus extending their growing season, and having an “indoor” venue for their classes.

The partnership with City Rising Farm even extended beyond just the SDOP Committee. Laura VanDale, a staff person for the Presbytery of Western Reserve, explains:  “After the director of the Farm made a presentation at a Presbytery meeting, several of our congregations were interested in engaging in ministry with City Rising, either financially or with hands-on opportunities.  We continue to offer their services as a resource to congregations in our Presbytery wanting to expand their own garden projects.” 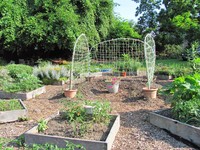 The Presbyterian Committee on the Self-Development of People (SDOP) began its ministry in 1970, and is now celebrating its forty-fifth birthday.  A ministry of the One Great Hour of Sharing (OGHS), SDOP enters into partnerships with economically poor community groups who have a vision for how to improve their lives and communities, and who themselves control the resultant project.  Local community groups apply for funding to either the national Presbyterian SDOP Committee, with offices in Louisville, KY, or to a local SDOP Committee, if there is one.

As a local committee, the Presbytery of Western Reserve’s SDOP Committee receives a portion of the OGHS offering each year, and uses these funds to financially support local projects, such as City Rising Farm, which meet SDOP’s criteria for funding.

Presbytery and Synod SDOP Committees are the local face of the National SDOP ministry that began 45 years ago, and have partnered in exciting ways with economically poor communities in their geographic area.

Cynthia E. White, former Coordinator of the national Presbyterian Committee on the Self-Development of People, says, “SDOP is about networking, collaboration and connectedness.  Our national, presbytery and synod SDOP Committees enable us to support neighbors, diminish barriers, and promote social and economic equality.   The hundreds that serve on these Committees have direct contact with local communities, congregations and presbyteries.  This ministry is the church living out its commitment to economically poor people throughout the country.  As the Coordinator of SDOP I value these colleagues and appreciate their many contributions to the ministry.”