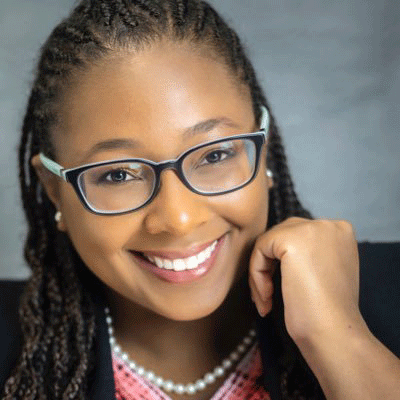 LOUISVILLE — Fourth-year medical student Akilah Hyrams isn’t a doctor quite yet. Once she does start practicing, she’ll no doubt have a long line of willing patients following her appearance last week on “A Matter of Faith: A Presby Podcast.” Listen here. Hyrams, a former Young Adult Volunteer and the daughter of a Presbyterian pastor, enters the conversation with hosts Simon Doong and the Rev. Lee Catoe at 27:25.

Hyrams was asked two questions: What’s it like working in the medical and health field as a person of faith? How does your faith inform the work you do and your perspective on the nation’s health care system?

“I’m going to get sappy,” she told the hosts, “but you’re working with God’s creations. You’re entrusted with their health and well-being. It’s super humbling and a privilege to be called into the health field,” because “it’s God working through you to help people and heal people. To be honest, that’s kind of rough. You are there for people’s worst days as well as their best days. They can ask you super hard questions, like ‘Why is this happening to me?’ and ‘What did I do wrong?’”

“As humans, we don’t like not knowing stuff,” Hyrams said. “It’s hard sometimes to trust that things are going the way they’re supposed to go. It may not be the way I wanted it to go, but it’s God’s will, and so we roll with it. It’s rewarding but difficult at times.”

She urged listeners considering a course of study to take a look at a career in health. “Please consider it,” she said. “You don’t have to go to seminary to be a faithful leader.”

As an adherent to the Golden Rule, Hyrams said she treats every patient she’s seen during her medical training with respect, kindness and dignity, “even if I don’t necessarily get that in return. I try to take care of not just the body, but the mind and the spirit too.”

She said she spends a few minutes during each appointment trying “to connect with the patient. I try to understand who they are, what they believe in, and what their health goals are and their life goals in general. What are their physical and socio-economic and systemic barriers? It could be their faith or trauma from the past that’s causing a barrier, or familial or romantic relationships.”

Hyrams plans to practice family medicine. “I will work with your general health and well-being, a unique position where I can address people’s barriers to health,” she said. “But some things I can’t address, and that leads me to the second part of your question.”

“A lot of us aren’t satisfied with the current system, me included. The current system values money over human life, and I’m not OK with that. We have a huge health disparity problem. I’m supposed to be taking care of God’s creations, but I’m in a system that values a paycheck over a human’s life.”

That level of disparity “makes me an advocate for my patients. My faith is driving my advocacy, because this is what I was called to do,” Hyrams said. “Obviously I’m not alone. There are hundreds of thousands of people who want to see change.” As a physician, “I’ll be in a position where I can work from the inside out. By being in the system I can help change the system … I’m not going to achieve all these goals, but I can at least start.”

Catoe said he was a pre-med major in college but elected to attend seminary rather than medical school. “One reason I didn’t go was I did an internship at a hospital where I realized the system is very broken.” Denied access to the health care they needed, some patients waited too long before seeing a doctor, which took a toll on their health, Catoe said. “It was overwhelming for me.”

Hyrams said sometimes she’s wanted to give up. “This is super hard and super depressing. How am I supposed to help? I’ve been there, and sometimes I still go there,” she told Catoe. “But I have surrounded myself with people who know what I want out of my life, and I have them to talk to when I feel that way.”

“It’s easy to feel jaded because you feel like you’re going in a circle and nothing’s changing,” she added. “But if you surround yourself with people who know your goals and can keep you accountable and inject a little hope and faith when things get a little darker, that’s what’s helped me the most.”

Her number one supporter has been her mother, the Rev. British Hyrams, who “went to seminary when I was in high school. A lot of her seminary journey was part of my faith journey,” she said. “I can go to her when I have questions or if I’m really struggling with ‘What am I doing?’ or ‘Why am I here?’”

Doong said he appreciates that Hyrams is an advocate for her patients. “We have talked a fair amount about advocacy on the podcast,” but usually “it’s advocating to government or an institution, not so much in the relational sense,” Doong said. “That’s something powerful and important for us to keep in mind. Not everyone feels like they can have that relationship with their doctor because the medical system feels so money driven.” How, he wondered, does Hyrams build that relationship “so the patient feels like you’re their advocate?”

During a typical appointment, “I do my exams, but I’m also talking about my patient’s life — whatever they want to talk about,” Hyrams said. “It takes respect, but I’m going to give them that respect, kindness and dignity every time they walk into the room. At least that’s my goal. If they don’t feel that, I hope they’ll let me know … People forget they can fire their doctor if they’re not comfortable with their physician.”

“That’s where I’m coming from,” she said. “It’s not common. I wish it was, but it’s not. With the way the system is, people forget what medicine really is, and that’s caring for people.”

Doong told Hyrams he and Catoe would love to have her back on the podcast once she’s added “MD” after her last name.

“I’d be so happy,” Hyrams replied, “to come back and talk your ear off again.”

New episodes of “A Matter of Faith: A Presby Podcast” drop every Thursday. Find new and previous editions here.