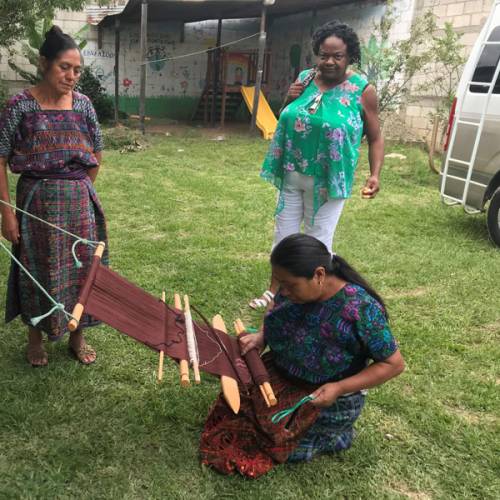 A member of Corazon de Mujer in Guatemala demonstrates how she weaves to a contingent from the Presbyterian Committee on the Self-Development of People. (Contributed photo)

LOUISVILLE — Last month, the International Task Force for the Presbyterian Committee on the Self-Development of People journeyed to Guatemala and Panama to take a firsthand look at the work being done by community partners.

The Guatemala portion included a visit to CEDEPCA, the Protestant Center for Pastoral Studies in Central America, which was selected to be in an SDOP intermediary partner in Guatemala. The selection of this organization was the result of the collaborative work with the office of the Latin America and the Caribbean Office in the World Mission ministry at the Presbyterian Mission Agency. The main reason of this partnership with this Guatemalan organization is to make true the wish and the request of Matilda Roberts Cartledge, a longtime Presbyterian from North Carolina who died in 2016. Before her death she made a generous donation to be used for programs impacting Guatemala and Nicaragua.

Both SDOP and CEDEPCA made presentations on their work by describing their history and their achievements over the years. As part of the stay, CEDEPCA took the SDOP team to hear from a 30-year partner indigenous group named Corazon de Mujer (Women’s Heart) in Chimaltenango. The group has 15 members and has for decades received training through workshops conducted by CEDEPCA. The group of seamstresses make scarves, bags and dye threads, among other goods. Over the last 30 years, the group has improved its cooperative work and living conditions for their family members. They continue eliminating barriers that work to keep them poor and oppressed.

The team that visited Guatemala also met in Panama with other two members of the International Task Force.

Following changes in SDOP’s international funding strategy, Panama is the third country on which SDOP has focused international funding. The first was Dominican Republic, where SDOP funded 13 community partners from 2007-09. The second was Belize, where SDOP funded 12 community partners during a six-year funding period. In addition, SDOP is in partnership with and provides grants to two intermediary partners: CE-MUJER in the Dominican Republic and the Presbyterian Church of Rwanda. 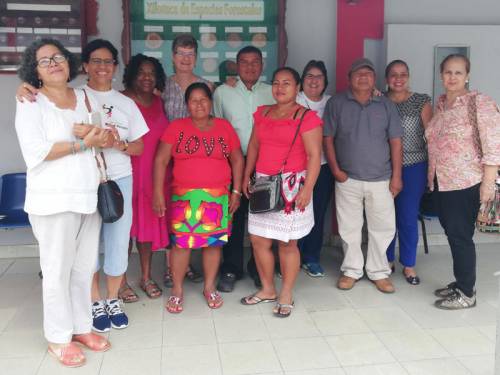 Each group faces a difficult economic situation. The SDOP team conducted workshops and conversations with each group, with the goal of having the groups promote their ministry in the community.

Now that Panama been identified as a focus country, the Presbyterian Committee on the Self-Development of People has funded three community partners there: Group of Women of Value, S.A. and the Panamanian Women Center (CEMP) in Panama City, and the Craft Art and Beauty group in Las Tablas City. 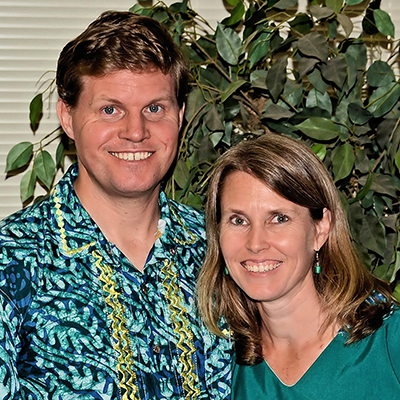