An international response is essential for restorative justice 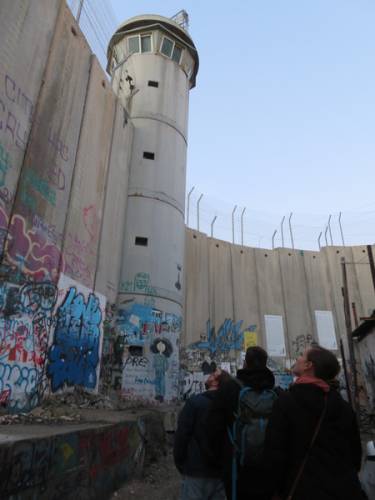 A view of the Israeli separation wall in Bethlehem. (Photo by Douglas Dicks)

LOUISVILLE — A webinar focusing on the current context of the Palestinian people, “A cry for hope amidst despair in Palestine,” was hosted Tuesday by Presbyterian World Mission’s Middle East and Europe office and the Office of Public Witness. It included speakers from two social justice and human rights organizations — one Palestinian and one Israeli — which have defined Israel as an apartheid state.

The first speaker, Yasmine Rishmawi, who was born and raised in Bethlehem, Palestine, is a member of the steering committee of the Palestine Youth Ecumenical Movement (PYEM) and has been actively engaged with the World Student Christian Federation since 2010. She said one of the greatest challenges Palestinian youth face today is the phenomenon known as Christian Zionism.

“As Palestinian Christians, and youth especially, we witnessed growing up calls from many politicians and theologians affirming fundamental interpretations of some texts in the Bible that our land does not belong to us,” she said. “We witnessed our land being confiscated, our families being imprisoned, our rights being liquidated, and our water, culture, language and traditions and traditional food being stolen before our own eyes.”

She said many felt they were required to stay silent. Otherwise, they would be breaching God’s promise and going against God’s will.

“But does the good and just God require us to give up on our right to be good Christians? Does God ask us to surrender our dignity, our independence and our land? Or are these beliefs imposed on us by a colonial theology? It makes us think, is God against us, or does God not love us? Our Bible was turned into an active participant in our persecution. Such interpretation is molding Christianity to match the colonial, imperial ideology. It reinforces and maintains the unjust status quo.”

Rishmawi said the resulting evidence is widespread apathy and indifference by youth, who are left with a deep sense of not belonging and a feeling of powerlessness.

“Our Christian youth are finding themselves at a crossroads where our two identities of being a Palestinian and being a Christian are unable to co-exist,” Rishmawi said. “This colonial theology that justifies the domination of a nation of one people over another further alienates us from ourselves. Reconciliation between both our identities is only possible through a Christianity and a theology that recognizes our humanity and our dignity and drive to exist in our own homeland.”

Kassis said the mere opportunity to speak with webinar participants gave him “immense hope for the power of human solidarity and for the truth and its capacity to rectify injustice.”

He believes there is serious confusion among global churches and among Christians on the issue of Palestine and Israel.

“The Western theology of the mainstream churches did not help churches and Christians worldwide to engage positively in the struggle for the liberation of Palestine,” he said. “Palestinians were and still are the victims of this racist and imperialistic theology. They misuse the Bible and turn it into a weapon. Many of them engaged in strong lobbying on behalf of Israel simply do not realize the level of hurt, harm and pain they cause Palestinians and their sisters and brothers, Palestinian Christians. Some consider us the obstacle to God’s plan in delaying the coming of the Messiah. Palestinian Christians are few in number, yet never stop with their initiatives to connect with their brothers and sisters worldwide.”

Written in 2009, the Kairos document calls for the end of the Israeli military occupation and apartheid and the need to bring a just peace to the region. Kassis called it a vision of hope — and hope, he said, is weapon that all aggressive regimes fear.

In 2017, all Christian Palestinian organizations, together with Kairos Palestine, published an open letter to the World Council of Churches and the global ecumenical movement saying Palestine was on the verge of a catastrophic collapse.

The third speaker, Hagai El-Ad, is executive director of B’Tselem بتسيلم בצלם – The Israeli Information Center for Human Rights in the Occupied Palestinian Territories.  In 2016 and again in 2018, he spoke before the United Nations Security Council calling for international action to end the occupation.

El-Ad said the theme of the webinar, “between despair and hope,” is very appropriate.

“I find it very frustrating that — if you are coming from a human rights perspective — that you need to somehow fake hope and fake optimism,” he said. “I think that is the wrong way to approach it. I think if the situation is dire, then we should describe it in all of its ugliness and negativity. Facts matter, and without a fair assessment of the situation and analysis of what is going on, it is easy to come to the wrong conclusions and not to be able to move forward.” 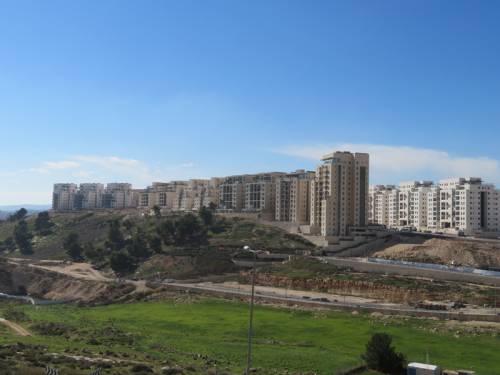 He believes it is essential to look at the situation with unflinching sincerity — not only the reality in the occupied territories, but the reality in the entire area that Israel controls. In January, B’Tselem for the first time published a document that looked at the 14 million people living under Israeli control.

El-Ad talked about a report published just the day before by Human Rights Watch that says Israel is committing crimes against humanity of apartheid and persecution in the West Bank, the Gaza Strip, and East Jerusalem. 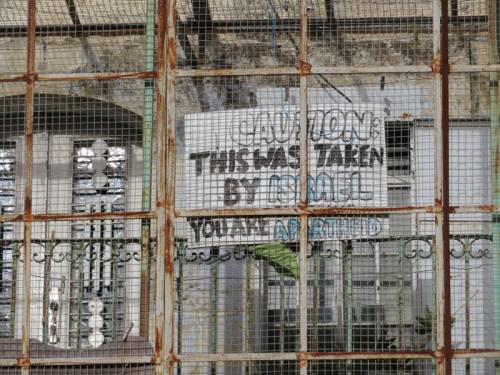 The sign on a home in downtown Hebron. (Photo by Douglas Dicks)

“If we look at the situation in reality,” he said, “then we will arrive closer to the international response that is essential to change this reality and to start moving toward a future of justice, with rights for everyone.”

The final speaker was Mina Haddad, a member of the steering committee of the Israel Palestine Mission Network, whose mandate is to demonstrate solidarity, educate about the facts on the ground and to change the conditions that erode the humanity of both the Israelis and the Palestinians.

A recording of the webinar is available by emailing Christina.Cosby@pcusa.org.