…be led forth in peace. (Isaiah 55:12). Support to the Peace & Global Witness Offering.
Make A Donation Click Here >
Home › A Corp Board takes care of business via Presidents Day teleconference

Actions enable board to meet its Feb. 21 GA reporting deadline 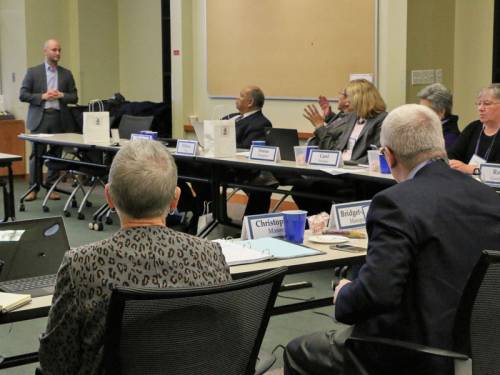 LOUISVILLE — Meeting via teleconference on Presidents Day Monday, the Presbyterian Church (U.S.A.), A Corporation Board approved business items ranging from its business plan and the report it’ll make to the 224th General Assembly to protocols relating to the coronavirus — should the virus ever arrive at the Presbyterian Center in Louisville, Ky.

A Corporation is the employer of record for the Office of the General Assembly, the Presbyterian Mission Agency, and the Administrative Services Group. It employs 478 staff, including 98 World Mission employees serving people abroad.

In the business plan also approved by the A Corp Board on Monday, each department within the Administrative Services Group — including that of the president of A Corp, Kathy Lueckert — identifies goals and projects, target completion date, how success will be measured and risk and mitigating factors involved. More than 90 goals or projects have been identified for work to be completed during 2020.

The board also gave its assent to the ASG’s responses to referrals from the 223rd General Assembly. Those include prioritizing translation and accessibility in the PC(USA), requiring annual sexual misconduct training to all employees of the church and requiring and expanding family leave policies.

It heard an informational report on protocols for the novel coronavirus outbreak of late 2019. According to the protocols, adapted from protocols adopted by PMA leadership during the 2014 Ebola crisis, A Corp employees who come in contact with someone known to be infected with the coronavirus should report the contact to a supervisor, then shelter in place to avoid infecting others. The A Corp has instituted a travel ban to China based on a recommendation from the Centers for Disease Control and Prevention. Travel to China by A Corp employees is possible only with approval by supervisors and the PC(USA)’s senior management.

Mike Kirk, the A Corp’s general counsel, said no cases of coronavirus have been reported in Kentucky.

The Rev. Bill Teng, an A Corp board member, said he has not seen an appeal to pray for the church in China. During the board’s closing prayer, A Corp Board Co-Chair Chris Mason did just that.

The board also viewed the annual Administrative Services Group budget report, which indicated it spent about $1.7 million less than its nearly $15 million budget for 2019.