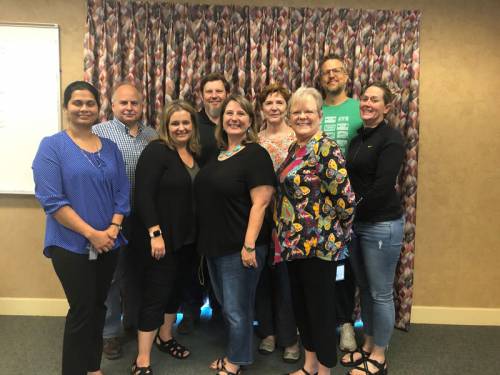 LOUISVILLE — Michelle Phillips, the acting director for the Presbyterian Youth Workers’ Association (PYWA), said a recent face-to-face-gathering of the Christian Formation Collective was “like a spiderweb tingling and then finally coming to life.”

The collective, which was formed late last year by the Office of Christian Formation in the Presbyterian Mission Agency (PMA), is made up of the Presbyterian Church (U.S.A.)’s five partner organizations that support formation ministries across a lifetime. Offering support to each organization, Christian Formation asked each collective member to come up with ways that they could work together across their age-and-stage ministries on intergenerational formation.

“We’ve agreed to meet quarterly to further build relationships and collaborate with each other and our office,” said Christian Formation associate coordinator Stephanie Fritz.

For the first time, two representatives from each partner in the collective were together, meeting at Louisville Presbyterian Theological Seminary. As Philips was learning about how members of the collective wanted to be a part of each other’s ministries, she was inspired. 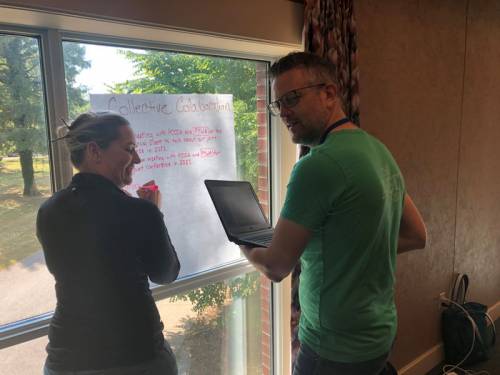 “It makes you feel like, ‘We could do this’ or ‘We could try that,’” she said. “It’s easier to dream again in the present moment — and for the future — knowing you have that support.”

Brian Kuhn, the former interim director for PYWA, echoed Phillips’ enthusiasm.  Discovering how the partner collective might work together “changes the possibilities,” he said.

“The energy was so good,” he added. “Ultimately, what all of us want to know is that formation we’re doing will continue into the next life stage.”

For the new national director of UKirk (Collegiate Ministries), the Rev. Gini Norris-Lane, hearing about ways the Christian Formation ministry team and collective can support each other and work together was helpful. She’s excited to think about what they might be able to do together to make a difference in the life of the church.

“We all tend to stay in our lanes,” she said.

When Pat Baker, president elect of the Presbyterian Older Adult Ministry Network (POAMN), shared how she had started studying the field of aging at 22, it got Norris-Lane’s wheels turning.

“Right now we have college students studying gerontology,” she said. “And Pat (Baker) said how helpful it would be for POAMN to have students attend their national conference so they could learn from each other.”

Baker said she too was pleased with how the first face-to-face gathering went. As she learned about each of the collective’s ministries — what they hoped for and how they might work together — she wanted them to feel good about POAMN, as well.

“This really got me up to speed and helped me see the vision of the collective,” she said.

The Association of Presbyterian Church Educators (APCE) and the Presbyterian Church Camp and Conference Association (PCCCA) are also part of the collective and had representatives at the gathering.  Recently both partnered with the Office of Christian Formation on projects to further the ministry and mission of their organizations — and the PMA’s.

Read how APCE is tackling a lack of diversity in its organization — supporting PC(USA)’s mission to dismantle structural racism.