The Rev. Dr. John McFayden retires as the Board’s Chief of Church Engagement

by Board of Pensions| Special to Presbyterian News Service 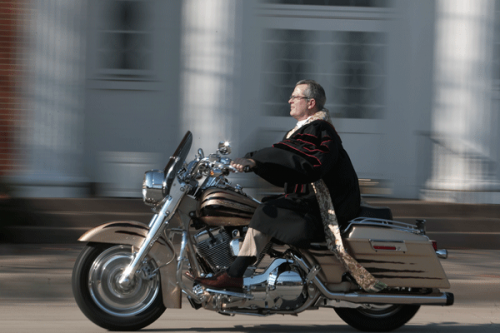 An avid motorcyclist, the Rev. Dr. John McFayden is retiring after 12 years serving the Board of Pensions of the Presbyterian Church (U.S.A.) (Contributed photo)

PHILADELPHIA — The Rev. Dr. John G. McFayden, whose first employment in the Church was at age 13 as an employee of a Presbyterian camp on the North Carolina-Virginia line, has retired as Executive Vice President and Chief of Church Engagement for The Board of Pensions of the Presbyterian Church (U.S.A.). His service spanned more than 40 years, 12 of them at the Board.

“The Board has been the right place for me to finish my career,” said McFayden, who pastored five congregations before joining the agency. “Being part of the Board’s mission of providing benefits and assistance is another way of ministering, of caring for people.”

“John has been a bridge builder, strengthening connections within the denomination, among the General Assembly, the presbyteries, and the congregations,” said the Rev. Dr. Frank Clark Spencer, Board President. “Most recently, he built connections with communities of color in the Church. This has helped the Board build relationships and understand needs so we can better serve all PC(USA) constituencies.” 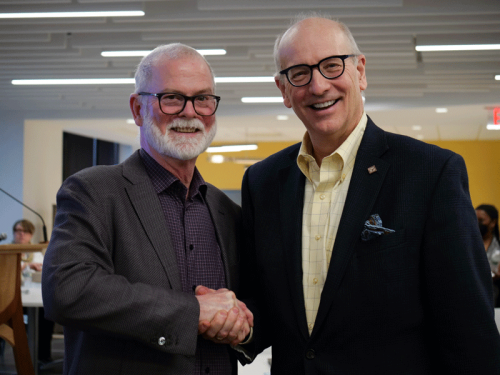 The Rev. Dr. Frank Clark Spencer, President of the Board of Pensions, called McFayden, at left, a “bridge builder.” (Contributed photo)

Graduating from the University of North Carolina at Chapel Hill with a bachelor’s degree in American religious history, McFayden expected an academic career. But while pursuing a Master of Divinity at Princeton Theological Seminary, where he also earned a Doctor of Ministry, the field work changed his mind.

“I was drawn to the breadth and depth of congregational ministry. I loved the broad relationships, the generations of families,” McFayden said. “You have an ongoing, deep relationship with a congregation.”

In 1998, McFayden was called to the 2,000-member First Presbyterian Church of Arlington Heights, Illinois. At his installation service, the Rev. John Buchanan of Fourth Presbyterian Church of Chicago described him as “a man of great integrity, lively intellect, and an open and welcoming spirit.” McFayden served there 12½ years before joining the Board of Pensions.

As McFayden packed up his office at the Board, he sorted through letters from people he had pastored. He paused over one, from a young woman updating him on the work she was doing, the birth of a child, a coming wedding, and plans for mission work. “I accompanied her mother to Washington, D.C., to pull her off the streets. She was 14 and working as a prostitute,” he said. “These experiences are what really matter, being there with people when there is a need.”

McFayden recalled visiting the home of a woman whose husband had just killed himself in the house and sitting with another at the hospital during her husband’s surgery. The husband later wrote to the pastor, thanking him “for being there when, regardless of outside appearances, we were in great need of support.”

Others wrote to praise his sermons. One congregant said he had “an ability to preach in a way that is uniquely thoughtful, memorable, and meaningful.” Another letter writer said, “You have made me a better person.” And a young congregant wrote that “some of your Sunday morning sermons were really funny.” Her favorite was about “the hokeypokey when you called it the hanky-panky. … Oh boy you made everyone laugh.” 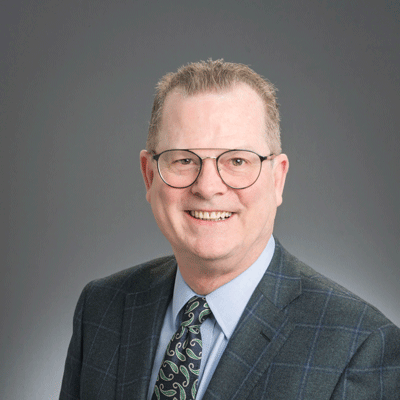 McFayden credits the late Rev. Dr. Blair Monie with breaking his stuffy stereotypes of Presbyterian ministers. When Monie was pastor at Preston Hollow Presbyterian Church in Dallas, he started a motorcycle gang — a relief to a young minister who did not want to give up his bike.

In retirement, McFayden, an avid sailor, will spend more time on open water than open road. Upon retiring, he and his wife, Hamida Shirazy, took their boat to the Bahamas. Dr. Shirazy is a dentist originally from Mombasa, Kenya. The two plan to head there soon to visit her family and explore opportunities to dedicate their gifts to service in Kenya.

“I have a theology of call that is not limited to ministry,” McFayden said. As Buchanan said 25 years ago when he recommended McFayden to the pastor nominating committee at First Presbyterian Church of Arlington Heights, “John’s creativity and energy need a new and exciting challenge.”

The Board of Pensions supports wholeness in the Presbyterian Church (U.S.A.) community and care for Benefits Plan members. For information, contact info@pensions.org.