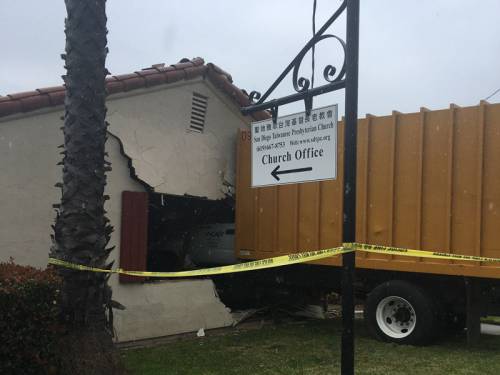 Taiwanese Presbyterian Church in La Mesa, Calif., was severely damaged by tree trimming truck. Miraculously no one was injured by the crash. Photo provided

LA MESA, Calif. — As Christians, we believe in miracles. The Bible records several miracles, like Jesus turning water into wine, Jesus raising the widow’s son from the dead and Jesus feeding at least 5,000 people. But are miracles still occurring in 2019?

If you ask the members of the San Diego Taiwanese Presbyterian Church in La Mesa, California, you would get an emphatic “yes”! On Ash Wednesday, a 3-ton tree-trimming truck plowed into the church, causing severe damage to the building. The truck demolished one of the Sunday school classrooms where the church usually holds its Bible study.

“Our church houses a military outreach mission in an office of the church,” said elder Winnie Davis, who chairs the facility management committee. “I received a call from one of the individuals working at the church with the ministry at the time. She said a truck just came through the church.” Davis says she immediately called the Rev. Shang Tsai, the pastor of the church. “The pastor was still at home,” she said. “Normally he would have been at the church during that time of day, setting up for the Wednesday night Bible study in the room that was destroyed by the truck.

“It’s a miracle that no one was hurt,” Davis added. 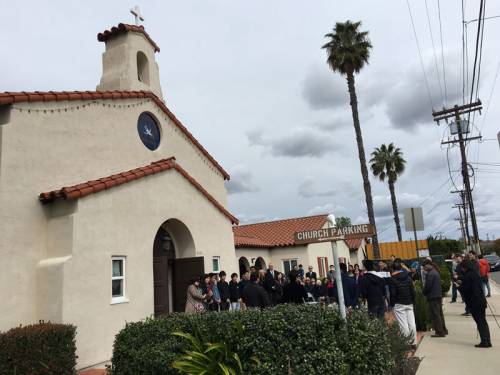 A community prayer service was held on March 10. Prayers were offered in four languages — English, Taiwanese, Mandarin and Spanish — for the congregation and community. Photo provided

Davis also praised Tony Ortega, “a good Samaritan neighbor to the church.” While he’s not a member of San Diego Taiwanese Presbyterian, the local construction manager stepped in to help the congregation identify a structural engineer to assess the damage. And since there was structural damage, the truck could not be immediately moved from the building. The truck remained stuck inside the classroom until the end of March.

While the damage was devastating, and the building was without electricity for two weeks, the congregation never stopped holding service. The congregation is relay fasting as they pray for direction to determine how to move forward. On March 10, the congregation held Prayer Sunday, a special service offering prayers for the church and community. The service was conducted in Taiwanese, Mandarin, Spanish and English.

At this time, the cost of repairing the damage to the 71-year-old structure hasn’t been determined. “While the contractor’s insurance will cover some of the cost, we still don’t know what the church will have to cover,” said Davis. “Many city building codes have changed, and we will be responsible for bringing the building up to code,” she said.

The church has 70 active members and moved into the facility about six years ago. San Diego Taiwanese Presbyterian has been a charter church of the Presbytery of San Diego for about nine years.