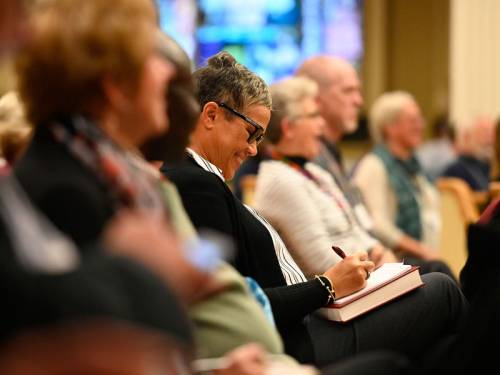 LOUISVILLE — The first  advocacy training weekend of the 2020s will focus on an issue many believe is the most important thing people can work on in the next decade.

“Imagine God’s Earth and People Restored,” said Catherine Gordon, Associate for International Issues in the Presbyterian Church (U.S.A.) Office of Public Witness, stating the weekend’s theme. “When we were talking about the theme in the planning team, the themes of economic justice and environmental justice came up. Eventually we decided to focus on environmental justice with specific attention paid to economic justice and how issues around the environment …  disproportionately affect the poor and people of color.”

For Presbyterians, the weekend will start with Compassion, Peace & Justice Training Day at Washington, D.C.’s New York Avenue Presbyterian Church. Last year, the day attracted more than 200 people who heard from keynote speakers and participated in smaller workshops on a wide variety of topics, including the environment, poverty and church policy. Speakers came from both inside and outside the church.

In 2020, the day’s keynote speakers will be: The Rev. Rebecca Barnes, coordinator of the Presbyterian Hunger Program, and the Rev. Melanie Mullen, the Episcopal Church’s Director of Reconciliation, Justice & Creation Care.

“Then we’ll have a panel of speakers who will be the voices of those who are most affected by environmental justice issues.  We are looking into having some of our partners from Puerto Rico participate,” Gordon said. “And, we will incorporate both domestic and international voices.”

With the environmental theme, Gordon and OPW Coordinator the Rev. Jimmie Hawkins said they hope to attract more participation among students and young adults. 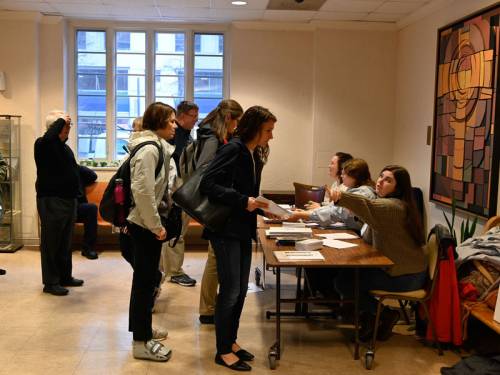 Organizers of Compassion, Peace & Justice Training Day hope to attract more participation among young people by offering a registration fee of $25 for people 30 and under. (Photo by Rich Copley)

“Young people know these environmental issues are going to affect them and their children,” Gordon says. “My niece is chair of the Environmental Student Project Committee at the College of Charleston … This is the first advocacy issue that she’s ever been involved in.”

Registration for the training day is just $25 for participants ages 30 and younger.

“We really want diverse voices at that conference,” Gordon says of the push to attract younger participants. “Diverse groups are more effective, more creative — we would like to have more young people participate and more people of color.”

Hawkins adds, “Outside of gun violence, this is one of the primary issues that youth focus on … I think it will resonate with them and, as always, we want more young people to be engaged in the ministry of the church. It’s a chance to connect with young people as well, because they oftentimes don’t see us as partners. 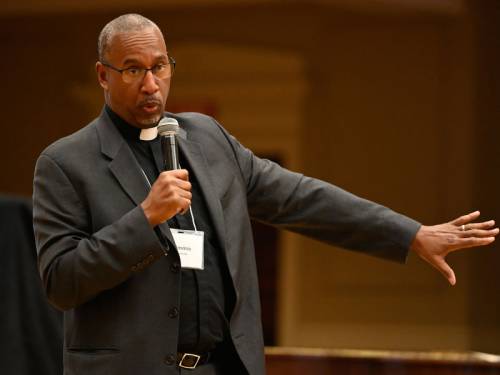 Office of Public Witness Coordinator the Rev. Jimmie Hawkins led a discussion of the Poor People’s Campaign during CPJ Training Day in 2019. (Photo by Rich Copley)

“We want to let them know that the church is very engaged and very concerned about climate change and climate justice.”

And that’s not just the Presbyterian Church.

For two days, participants engage in speakers, panels and workshops throughout the hotel, which is across from the Pentagon. Then, on April 27, they head to Capitol Hill to meet with senators and representatives, or their staffs, to advocate for the issues agreed on at the conference.

Participants include people from Methodist, Catholic, Lutheran, Episcopal, Disciples of Christ, Unitarian Universalist, Baptist and other denominations, churches, and groups. Presbyterians regularly bring the largest delegation to EAD, but Hawkins and Gordon say it is important to come and see the broad world of ecumenical advocacy. 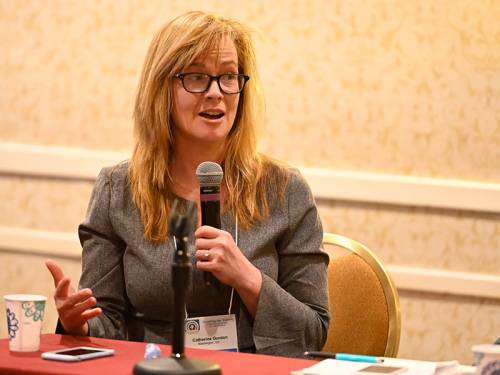 Catherine Gordon, associate for International Issues in the PC(USA) Office of Public Witness, led a panel discussion during the 2019 Ecumenical Advocacy Days. (Photo by Rich Copley)

“CPJ Day serves a function of connecting Presbyterians and connecting people to the church and the work of their church,” Gordon says. “Ecumenical Advocacy Days gives them a sense of the broader ecumenical community and connects them to other people in their area. That’s a lot of the feedback that you get from people about EAD: they like the relationships and the networking, the connections they make.”

For instance, when people prepare for the visits with lawmakers and go to Capitol Hill, they are grouped by state and congressional district, instead of by denomination.

“It’s about building a broader coalition,” Gordon says. “It’s just like in D.C. If the Presbyterians are just working on an issue, then we don’t usually have much traction. But if we can work together with other faith groups, and even NGOs (Non-Government Organizations) — the broader the coalition, the stronger the advocacy, and the more likely it will be impactful.”