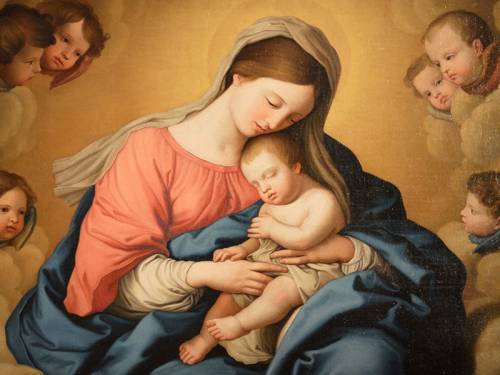 Madonna with Child and Angels by Giovanni Battista Salvi

If anyone has the right to think she had an extra-special connection to Jesus, it’s Mary. After all, she carried him in her body, birthed him in the stable and nourished him with her breast milk. As he grew up and engaged his ministry, she scolded him when he disappeared, commanded him at Cana, stayed with him when he hung on the cross and rejoiced in him when he rose again.

Harriet Beecher Stowe, author of Uncle Tom’s Cabin and daughter of Presbyterian minister Lyman Beecher, argues that Mary nurtured Jesus not only by way of her body, presence and emotional support, but also by her teaching. Jesus would not have been the same person if Mary had not been his mother, Stowe insists. She taught him frugality, Beecher says, referencing Jesus’ teachings about money. She must have taught him how to make bread, argues Beecher — how else would he have come up with all those yeast analogies in his parables?

As I’ve pondered Mary’s motherhood, I’ve come to recognize Mary as more than a supporting player in the annual Christmas nativity scene. She is also a person of faith all of us — women and men alike — would do well to emulate. Mary responded wholeheartedly to God’s call, as we should, saying, “Let it be unto me as you have said.” Because Mary submitted willingly to God’s claim on her life, she became nothing less than an essential participant in God’s work of salvation, even as God invites each of us to be.

But here’s a confession: I have become a bit too defensive of Mary. When people worry about Mary being too passive, I override them, quoting from the song of praise she sings in Luke 1 known as the Magnificat in defense of her creativity, agency and prophetic gifts. When people interpret Mary’s “pondering” as hormonally induced maternal sentimentality, I insist that Mary was a theologian trying to make sense of what was happening all around her in light of God’s promises.

So, when my friend Glen Bell suggested Jesus challenges Mary to think more expansively about who she is as a “mother,” I pushed back. “Behold your son,” Jesus says to Mary in John 19, as he is dying on the cross, directing her to John. And he says to John, “Behold your mother.” While I interpreted that passage as Jesus, a caring son, wanting to make sure his mother is provided for after his death, Glen read it as Jesus issuing one final charge. Glen argues that Jesus is challenging Mary, alongside John, to think more broadly than she has to this point about family, about relationships, about community. Mary’s and John’s lives as disciples are not to be oriented only around him, but also around one another.

If Glen is right, I imagine Jesus’s instruction required some heavy spiritual lifting on Mary’s part. On top of having to deal with her son and Savior’s death, she is now called to think even more broadly about her identity as a mother. God, through Gabriel, charged her to mother Jesus. Jesus, her son, is charging her to be the mother to John and the other disciples even as she has mothered him; to be cared for by them even as she has been cared for by him. She who has been blessed to be the Mother of God is to continue being blessed as an ordinary member of the early Christian community, the family of Jesus himself in which all who do the will of God are his brothers and sisters and mothers (Mark 3).

There is no question in my mind that Mary rises to the challenge Jesus extends. We see her, on Pentecost, fellowshipping with the other disciples in the Upper Room (Acts 1). I imagine her “mothering” them, telling them stories of Jesus’s childhood, encouraging and mentoring them in the faith.

In these days of communal brokenness in our churches, nation and world I wonder: How can we, with this sister in Christ, rise to the challenge Jesus extends?

May God give us the grace to expand beyond our “inner circles” of friends and family, adopting and being adopted by new brothers, sisters, mothers and fathers with whom we can share abundant life.