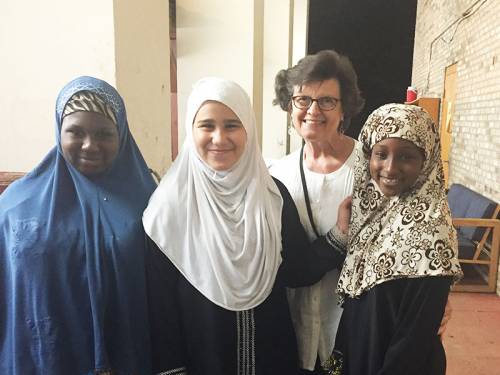 Melanie Rodenbough with young women at the Islamic Center mosque in Greensboro, North Carolina. Rodenbough, who chairs a justice and peacemaking ministry at Guilford Park Presbyterian Church, has been working at building relationships and friendships with Muslims. Melanie Rodenbough

It’s been a good year for hate.  Melanie Rodenbough, a lifelong Presbyterian, lives in North Carolina. In early 2017, she learned from the news that the FBI was beginning an investigation after an audio recording of a meeting of conservative activists near Winston-Salem revealed death threats against Muslims living in the area.

As someone who had taken on the challenge of working with immigrants, Rodenbough was appalled.

Rodenbough’s work with immigrants began in 2012, as she was battling stage 3 breast cancer that had spread to her lymphatic system. Realizing she might not have forever, she wanted to make a difference with her life.

During this time, the Rev. Dr. Jeff Paschal of Guilford Park Presbyterian Church in Greensboro asked her to begin planning a program on immigration, and he suggested that she invite Presbyterian pastor John Fife to speak. Moderator of the 204th General Assembly (1992), Fife had worked with immigrant ministries in Tucson for decades and co-founded the original Sanctuary Movement, in defiance of federal law, in the 1980s. He was tried and convicted on alien-smuggling charges and served five years’ probation.

Rodenbough said her cancer recovery experience and hearing Fife mobilized her to think deeply about the church’s obligation to speak for justice, for the poor and marginalized. Paschal was also in deep thought about the church’s obligation to speak up. And, in 2013, he began discussing with Rodenbough and others in the church his desire for Guilford Park to become more involved in the world, to take prophetic stances on issues some might classify as “too political.” 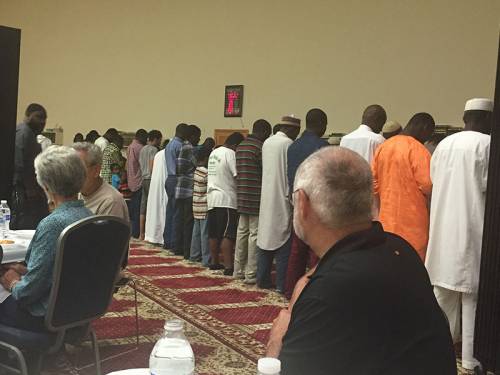 Members of Guilford Park Presbyterian Church observe Muslim prayers at the Islamic Center mosque. Since 2015, the two faith communities have been getting to know each other, building friendships in light of threats of violence directed at immigrants in their community. Melanie Rodenbough

That same year, Rodenbough was asked to serve on the FaithAction International House board in Greensboro, which advocates for thousands of new immigrants arriving every year in North Carolina. As she began making friends with immigrants and Muslims through her board work, Paschal wrote about an interfaith trip he had taken to Israel for the Greensboro News and Record. His thoughts brought him into contact with some unexpected people.

His article revealed that his trip, whose sponsors included the Jewish Federation of Greensboro, didn’t visit the largely Palestinian West Bank and Gaza Strip. That offended a local college professor, Max L. Carter, who was then director of the Friends Center and Quaker studies at Guilford College. Carter has been going on trips to Israel for 25 years and always includes a visit to “both sides” in the Holy Land.

Carter wrote to Paschal, suggesting they meet for coffee with Zane Kuseybi, a man with influential ties in the Muslim community. Carter and Kuseybi told Paschal about their experiences in Palestine and what life was like for Palestinians living under the Israeli occupation. Kuseybi realized Paschal was listening deeply, wanting to fully understand the complexities of “truth” narratives playing out in Israel and the occupied Palestinian territories.

“His mind was not closed,” said Kuseybi. “He was open to learning.”

“This was all before Donald Trump and the concerns his election raised within the Muslim community,” said Rodenbough. “We discussed the Bible that night and the Quran. We felt the presence of the Holy Spirit, the confirmation of God leading us. It was lovely.” 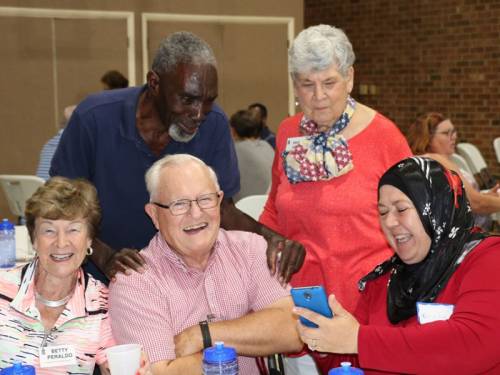 Guilford Park Presbyterian Church members share a moment of laughter with Muslims from the Islamic Center mosque at a covered dish supper after a Ramadan fast on July 2, 2017. Melanie Rodenbough

By 2015, making friendships with Muslims had become a mission priority for Guilford Park Church. On behalf of the church’s Justice and Peacemaking Committee, Rodenbough, chair of the newly formed committee, invited Amber Khan, a 33-year-old Muslim from Pakistan, to participate in an “Ask a Muslim Anything” discussion.

“It’s an interesting feeling you get when you’re in that church,” said Khan. “Immediately I felt welcomed and embraced.”

Rodenbough, who served alongside Khan on the board at FaithAction, describes her life as “much richer now” because of her relationships with members of immigrant and Muslim communities in North Carolina.

“They’ve expanded my thinking,” she said. “Having endured much here, they still exude goodness, kindness and hope. They are a testimony to the human spirit.”

That’s why Rodenbough was alarmed when one of the participants at the conservative activist gathering early in 2017 said, “My only recommendation is to start killing the hell out of them.” That’s when Rodenbough and Guilford Park were called to action. After all, the death threats were not directed at some generic “other.” They were threats toward people Guilford Park knew.

The Sunday morning after the death threats were made, the Justice and Peacemaking Committee invited members of the congregation to write personal notes to people at the Islamic Center.

“It was amazing to watch how thoughtful our 500 members were,” said Rodenbough. “The notes were full of love and affirmation.”

When Rodenbough told Khan about Guilford Park’s gesture of friendship to those at the Islamic Center, Khan was touched.

“Knowing we are loved during this time of ugliness means a lot for our mental health,” she said. “Melanie’s church reached out to Muslims when we felt the most vulnerable. That’s a true Christian value, you know.”

From late May through June, during the observance of Ramadan, a month marked by fasting to commemorate the first revelation of the Quran, anti-Muslim rallies took place in North Carolina and around the country as the rhetoric intensified. Rodenbough was horrified that variations of the question “Can we not kill them all?” were openly being asked about Muslims — with no sense of shame.

Again, her committee felt compelled to act. This time they invited members of the Islamic Center to come to a traditional Presbyterian meal — a covered dish supper — to break the Ramadan fast at their church.

What is your congregation doing?

The hate in 2017 that was initially directed toward immigrants and Muslims has spread to other minority groups. In mid-August, white supremacists marching in Charlottesville shouted, “Jews will not replace us!” Demonstrators protesting the removal of a Robert E. Lee statue were anti-Semitic, anti-black and anti-immigration. President Trump refused to condemn them, initially.

We’re interested in what Presbyterian congregations are doing to address terrorism coming from hate groups inside our own country.

Send a letter to:
Presbyterians Today, 100 Witherspoon Street, Louisville, KY 40202
Or email us at: editor@pcusa.org

“Imagine how our Muslim neighbors feel, how afraid they are for their children,” she wrote to members of the congregation. “Now imagine us, inviting them to dinner, with no agenda other than to continue to welcome them and get to know them.”

Muslims from the Islamic Center mosque and Christians from Guilford Park gathered for a meal a few weeks after Ramadan. Together, they rejected the narrative of hate.

“Rodenbough and Guilford Park have your back,” Khan said. “I’ve come to believe it is part of her — and their — faith.”

For Paschal, the relationship with the Islamic Center means his world has become bigger. His understanding of issues is much more complex. The time spent with Muslims, hearing about their faith, has made him more hopeful. The Muslims he knows completely reject those engaging in terrorism.

“Folks act as though the majority of Muslims would be terrorists,” he said. “But there are 1.5 billion Muslims on Earth. The terrorists are falsely claiming they are acting in the name of Islam. It would be just like us believing that the Ku Klux Klan is acting on behalf of all Christians, in the name of Christianity.”