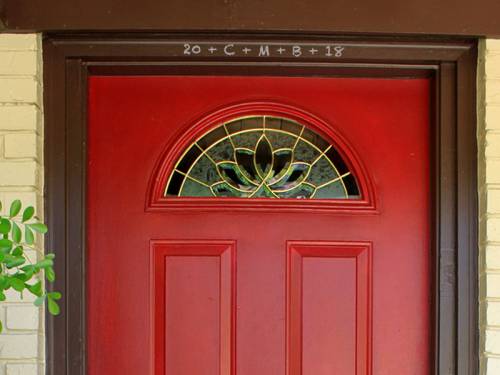 Cassi, a member of my church, once dreamed a dream so vivid, so compelling, that when she woke up, she was sure she knew what God was calling her to do with her life. That day, she enrolled in a foster parent training course.

After months of preparation and mountains of paperwork, Cassi invited a friend and me to her now child-ready home. It was the sixth of January, the Epiphany of the Lord, also known as the Feast of Epiphany or Three Kings’ Day. I brought two items: a candle and a stick of chalk. We lit the candle to signify the light of Christ that once shone brilliantly in the heavens, leading the Magi, wise star-watchers from the east, to follow its beams all the way to Bethlehem. There, the Gospel of Matthew tells us, they found the young Savior with his mother.

Now, why the chalk? A centuries-old Epiphany tradition more common in Europe than in the United States is known as “chalking the door.” On Epiphany, the day following the Twelfth Day of Christmas, guests gather at a home to invoke the Magi’s and Christ’s own blessing upon it. Drawing on the second chapter of Matthew — the only Gospel depicting the Magi — those gathered may read a brief, responsive liturgy or say a prayer.

Although Matthew never mentions the Magi’s names, tradition has it that they were called Caspar, Melchior and Balthazar. The initials CMB also abbreviate a Latin house blessing, Christus mansionem benedicat, meaning “May Christ bless this dwelling.” Chalking the door on the Feast of Epiphany involves writing — with chalk — these three letters, interspersed with crosses and flanked by the numbers of the present year, on the lintel of a house’s front door.

When we three women chalked the door of Cassi’s house on Epiphany, we prayed that she would soon receive her long-awaited foster care license. We prayed that one of the roughly 18,000 children who live under our state’s supervision would soon find with Cassi a safe and loving foster home. This was the holy day marking the Messiah’s revelation as a homeless infant born to a young unmarried woman and an honorable foster father. It was fitting for us to seek God’s blessing on the vocation to care for children in need that had come to Cassie through a powerful dream.

The English word epiphany is rooted in the Greek word epipháneia. An epiphany is a revelation, a manifestation. All six occurrences of epiphanies in the New Testament’s original Greek language refer to Christ’s coming. Notably, none of these occur in Matthew’s account of Christ’s revelation to the Magi. Even so, the story portrays the manifestation of God in person. The Most High is shown forth in the least likely, humblest guise.

Matthew’s second chapter also refers to three dreams that convey divine guidance to the dreamer. First comes the dream that warns the Magi to steer clear of duplicitous King Herod. A few verses later, Joseph dreams of the Lord, who leads the exiled holy family to Israel. Then another dream warns Joseph away from Herod’s son and toward the Galilean town of Nazareth.

By standards such as these, Cassi’s dream of the direction her life was meant to take seems downright biblical. Her dream was fulfilled and our Epiphany prayers were answered when later that year, an infant who had been exposed to drugs in the womb was placed in Cassi’s care. Both the baby and the foster mother flourished.

The dream of the Magi, the insight of Joseph, and Cassi’s experience all manifest this truth: When our minds are at rest and we are receptive to the light that shines in the darkness, sometimes God is revealed to us and our lives’ purposes are made clear.

But what if you’re someone who rarely remembers a dream, much less receives divine guidance by night? You might think you’re exempt from epiphanies and immune to the self-revelation of the Lord. Resist this conclusion and remember that you, as much as anyone, are a beloved child of God, created in the image of your Creator. The very fact that you’re reading this meditation on epiphanies means you’re open to the One who made you, whose handiwork you show forth simply by being alive. You, yourself, manifest the Maker’s creativity. To you, perhaps quite unexpectedly, God can be made known.

No one can manifest mystical knowledge at will. It would be hazardous to try. However, through such practices as prayer, Scripture reading, spiritual direction and compassionate service to others, people of faith become gradually formed by the Holy Spirit into disciples who have the mind of Christ. The key to becoming an epiphany-receptive Christian is to practice self-emptying love, like Cassi, who fosters babies unable to repay her, or like Joseph, who raised Mary’s child as his own. Jesus appears in many people, from fragile infants to older adults, and all need love. Jesus is the ultimate receiver and revealer of God. If you know nothing else, know this much. To you will belong the holiest epiphany of all.

Rachel M. Srubas is the pastor of Mountain Shadows Presbyterian Church in Tucson. She is the author of three books. 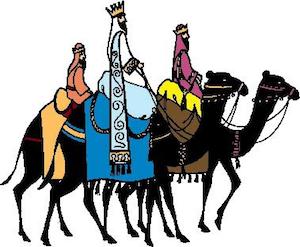 While Christmas marks the coming of God to us, Epiphany celebrates the appearance of the Lord in the midst of humanity. Epiphany extols the revelation of God to the world in the person of Jesus of Nazareth.

Epiphany not only discloses the Savior to the world, but also calls the world to show forth Christ, to be witnesses to God’s true light. The timeless mystery of the incarnation — God in flesh — leads us forth to show and tell of Christ as God’s gift of grace and salvation for all people. Some call this ongoing epiphany the work of Christmas.

Epiphany is observed on Jan. 6. Mark that day by chalking your own door. If you do, here’s how your inscription will look:

After chalking the door, light a candle and invite those gathered at your home to say a responsive liturgy such as this:

Peace be to this house and to all who pass through its doors.
With the wise men from the East, we ask,
Where is the child who has been born a king?
We have come to pay him homage.
When the star stopped over the place where the child was,
the Magi were overwhelmed with joy!
They entered the house and saw the holy Christ, with Mary, his mother.
With those who first adored him, we have come to honor the Savior.
God, we thank you for revealing Jesus to the world.
May the living Lord bless this home and all who live or visit here. Amen.

Or say any of the following Epiphany prayers offered by the Office of Theology and Worship:

God of endless light, you sent a star — rising from darkness, guiding seekers and sages, overwhelming us with joy.  Let the splendor of your dawning light
grow in us and in all the world until the whole creation shines with your glory; through Jesus Christ, our light. Amen.

God of light, shining in darkness, through a little child, born in Bethlehem, you open to us the treasure of your grace. Help us to search diligently for him, so that we may offer our lives to you with thanksgiving, joy and praise; through Jesus Christ, the rising star. Amen.

Shepherd of Israel, you sent a star to enlighten the wise and a child to topple the tyrant. Make us wise enough to seek you among the least of your children, wise enough to trade our treasure for the gift of overwhelming joy. Amen.