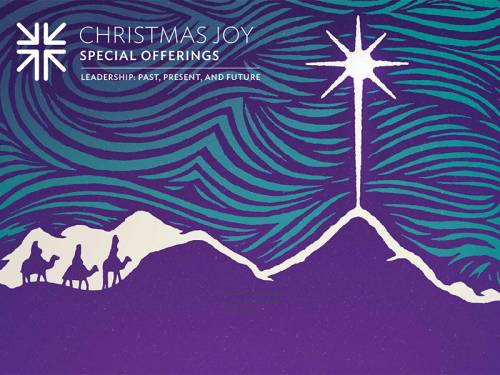 As an urban minister for more than 40 years, the Rev. Bob Forsberg dedicated his willing hands, generous heart and sharp mind to serving people society had cast aside.

In 2016, however, at age 91, the mental capacity that served this Presbyterian minister so well began to fade. His memory loss became so debilitating that Forsberg, who had spent years focused on helping others, found himself needing help. Forsberg’s retirement income was enough to pay the bills at his retirement community in Oakland, California, but he had few other resources.

Prior to retirement, he earned a modest salary serving among economically disadvantaged people in New Haven, Connecticut, at the nonprofit organization Wider City Parish.
Forsberg believed he should be paid no more than the average worker in his impoverished neighborhood. He and his family qualified for public housing and made their home there. Forsberg was adept at leveraging ministry funds from churches and charitable foundations for initiatives ranging from youth work to affordable housing. He advocated for civil rights locally and nationally and for better schools in his community.

In retirement, he relocated to the West Coast to be near his children. He eventually moved to a retirement community and functioned well in an independent living unit until last year. 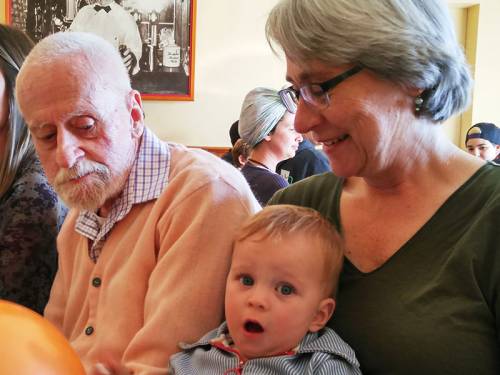 Thanks to gifts made to the Christmas Joy Offering, the Rev. Bob Forsberg, who spent his ministry career helping the disadvantaged, is able to get the care he needs. The memory care facility he resides in is close to family, allowing frequent visits from his daughter, Barbara, and great-grandchild, Gabriel.

Dementia forced him to move into a memory care unit, but the added service was more than Forsberg could afford long-term. His children were grieved by the possibility of having to move their father to another facility.

“We looked around at places nearby that were in the price range we could afford. It was very upsetting to see those conditions and to think about my dad being in those circumstances,” said his daughter, Barbara Forsberg.

Thanks to gifts made to the Christmas Joy Offering, her father did not have to move. The gifts enabled Forsberg to receive high-quality care in familiar surroundings.

Half of the Christmas Joy Offering goes to the Board of Pensions Assistance Program to help former and present church workers and their families who are in critical financial need. The other half supports future church leaders who study at Presbyterian-related racial-ethnic schools.

Barbara Forsberg said it was generosity, a trait her father so faithfully incarnated, that came to his aid in his time of need.

“This is a very moving thing,” she said. “And the irony is that I don’t know if he is even aware of it in his mental state, but certainly for those of us who are caring for him, it is a wonderful circle.” 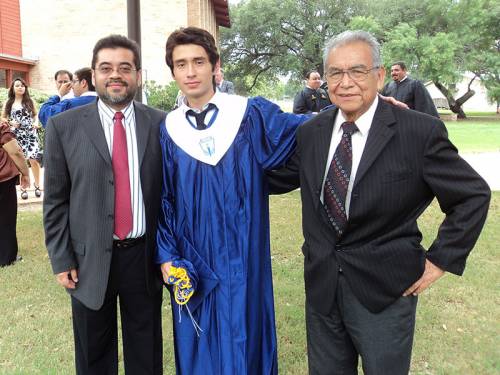 Long ministerial careers like Forsberg’s begin with preparation, and that’s where Jasiel Hernandez is in his vocational pilgrimage. Hernandez, a senior at Austin Presbyterian Theological Seminary, said his high school years at the Presbyterian Pan American School (Pan Am), a racial-ethnic school in Kingsville, Texas, helped him hear the call to ministry.

While he gives high praise to Pan Am’s academic preparation, chapel services and extracurricular activities, Hernandez also commended its student-organized Bible studies and prayer groups. He led a weekly dormitory Bible study during his final year at Pan Am.

“It is there I discovered I wanted to learn more about God,” he said. “I wanted to know more about people’s faith and their understanding about how God worked in their lives through different events and situations. That Bible study really impacted my life.”

Hernandez grew up in Mexico listening to stories about Pan Am from his uncle, the Rev. Lemuel Garcia-Arroyo, who is now the associate director in the Racial Ethnic & Women’s Ministries area of the Presbyterian Mission Agency.

Like Hernandez, Garcia-Arroyo lauds the overall experience of Pan Am, especially valuing the student-initiated spiritual activities.

“Who would have thought teenagers would voluntarily go to chapel to pray after breakfast?” Garcia-Arroyo asked. “But that’s what we did. I wasn’t pressured to do it, but it helped solidify my identity and my love for the church.”

Garcia-Arroyo is grateful that Pan Am has helped shape his nephew’s calling as well, adding that he is “so proud and joyful that God would call him into ministry.”
Both Hernandez and Garcia-Arroyo appreciate the scholarships that made it possible for them to attend Pan Am — scholarships made possible by gifts made to the Christmas Joy Offering.

“My family is from humble origins, so money was tight,” Hernandez said. “I appreciate those who gave money, because a scholarship made it possible for me to go to Pan Am.”

At the Menaul School, a Presbyterian racial-ethnic school in Albuquerque, current student Gary Lucero is also following a family tradition that began a century ago. 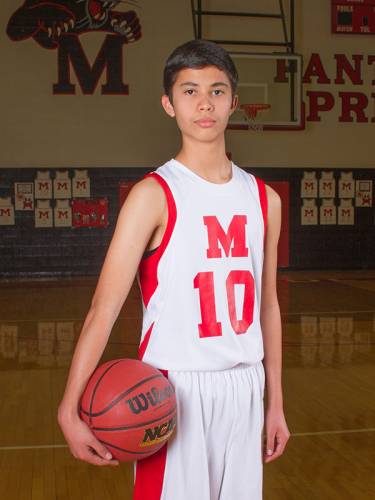 Scholarships funded by the Christmas Joy Offering allow Gary Lucero to carry on a family tradition. Lucero is just one of 29 family members who have attended the Menaul School in Albuquerque. Lucero appreciates the small class sizes and is on the track and basketball teams.

Joe Candelaria, Lucero’s grandfather, a 1950 Menaul graduate, worked for many years as a public school industrial education teacher. Menaul honored him with the 2017 Harper C. Donaldson Outstanding Alumni Award, citing his commitment to the values that Menaul seeks to instill through Christian education.

Two of Lucero’s paternal great-grandparents, Ofene Garcia, a 1934 graduate, and Carlota Romero, a 1937 graduate, met at Menaul and later married. Both were active in the Presbyterian Church throughout their lives.

Appreciative of the legacy he inherited, Lucero sees how the Menaul experience is shaping his future.

“The small classes help a lot and the teachers and the coaches are very supportive. I love it here,” he said. Lucero is a high-achieving student and is on the track and basketball teams.

Today, Menaul students are beginning bright futures of their own. About half of them come from homes where neither parent has attended college. And many families sacrifice to send their child to the school because of its reputation: Nearly every graduate moves on to higher learning. Gifts to the Christmas Joy Offering will open doors of opportunity for more racial-ethnic students to begin their own legacies.

Lending aid in times of crisis

On her college graduation day in 2014, Elisabeth Scotland was looking forward to the opportunities awaiting her. The day of celebration and joy, however, suddenly turned into a time of trauma and heartache.

After receiving her diploma from Boston University, Scotland, along with family and friends, went to a baseball game at Fenway Park. While waiting for an elevator, she casually leaned against the elevator doors. The doors opened at the wrong time and Scotland fell 20 feet down the elevator shaft, sustaining multiple injuries, including a brain injury that put her in a coma for a week.

Her parents, the Rev. John and Anne Scotland, spent two months in Boston during her hospitalization and rehabilitation. John Scotland’s congregation, Community Presbyterian in Brigantine, New Jersey, graciously granted him leave, but there were living expenses to pay in Boston and someone had to fulfill pastoral duties while he was away.

Thanks to a Shared Grant from the Presbytery of West Jersey and the Board of Pensions Assistance Program, the Scotlands’ expenses in Boston were covered, and a newly ordained pastor from Community Presbyterian handled the congregation’s pastoral duties.

Caring Presbyterians in West Jersey Presbytery rallied around the Scotlands with prayers and financial gifts. However, another crucial component of their support came from Presbyterians across the country who gave to the Christmas Joy Offering.

Christmas Joy Offering gifts also helped the Scotlands two years earlier when Superstorm Sandy damaged thousands of homes in the island community where they live.
At the Scotland home, 4 feet of water flowed into their basement, ruining the heating system, electrical panels, appliances and other possessions. They received an Emergency Assistance Grant from the Board of Pensions to help with replacement.

Learn more about the Christmas Joy Offering by visiting presbyterianmission.org/christmasjoy

“I think the emotional support was more important than the financial support,” John Scotland said, explaining that it was comforting to “know that somebody outside the community knew we were hurting and wanted to be of help.”

Thankfully, life is much better these days for the Scotlands. In early 2017, their daughter passed her CPA exam. She is now an accountant in Philadelphia. The same year, they made a gift to the Board of Pensions Assistance Program to help others get the kind of help they received.

“Having a Presbyterian family was a big blessing to us and helped us come through tragedy,” John Scotland said.