Building a Life of Faith. Support the Pentecost Offering.
Make A Donation Click Here >
Home › Can we help end poverty?

“Conversation Kickstarters”: at this year’s Big Tent, General Assembly Co-Moderators Denise Anderson and Jan Edmiston recommended Always with Us? What Jesus Really Said about the Poor for their “One Church, One Book” discussion. The author offers her thoughts and questions here. 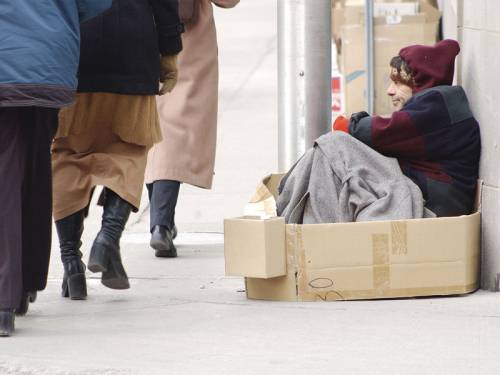 What does the Bible say about poverty? Is it an unfortunate but inevitable reality? Is it the fault of the poor themselves? Is it a way to get close to God? Is it a curse from God?

Poverty, indeed, is a main theme of the Bible. From Genesis to Revelation, the Bible proclaims justice and prosperity for the poor. Exodus is a founding story of God being on the side of the poor and oppressed.

The Deuteronomic Code offers commandments of how to care for our neighbor in order to honor God. The prophets denounce oppressing the poor. The Gospels proclaim bringing good news to the poor, and Paul’s epistles instruct the followers to offer mutual solidarity through the collection for the poor. Yet the Bible is often interpreted in ways that justify inaction in the face of poverty, state that poverty is eternal, and claim that if God wanted to end poverty, God would do so.

A particularly controversial passage used to justify poverty comes from Matthew 26:11: “For you always have the poor with you, but you will not always have me.” This takes place in the house of Simon the leper, in the town of Bethany (which means “house of the poor” in
Hebrew), directly following Jesus’ overturning the tables and challenging the religious and political authorities for their oppression of the people.

Jesus is dining with his disciples when a woman anoints his head with expensive ointment. When he says, “You always have the poor with you,” he is responding to his disciples, who say the woman is wasting the ointment.

The disciples say the ointment could have been sold for a year’s salary and the money given to the poor. But this idea of earning lots of money and giving the proceeds to the poor follows how we try to address poverty — by doing charity work, by buying and selling and then donating to the poor, but never questioning how poverty was created in the first place.

Questions for us to consider today

1 in 2 people living in the United States is poor or low-income; 43 percent of U.S. children live in families that struggle to feed, clothe and house them. What does the Bible have to say about this level of suffering of God’s children? What can we take from the story in Matthew
26 in our response to this poverty?

Visit poorpeoplescampaign.org and explore the various global grassroots organizations engaged in the Poor People’s Campaign: A National Call for Moral Revival. What connections can you make between their messages and structure and the passage in Matthew 26?

Do you have a favorite Bible passage that speaks to poverty and justice? What does it have to say about how to treat God’s children?

When Jesus says, “You always have the poor with you,” he is actually quoting Deuteronomy 15, which says that there will be no poor person among you if you follow the commandments God is giving today — to forgive debts, release slaves, pay people fairly and lend money even knowing you won’t get paid back. Deuteronomy 15 continues that because people will not follow those commandments,
the poor will never cease to be in the land.

Thus, in this passage and throughout the Bible, Jesus isn’t condoning poverty — he is reminding us that God hates poverty and has commanded us to end poverty by forgiving debts, raising wages, outlawing slavery and restructuring society around the needs of the poor.

He is reminding the disciples that hypocrisy and limited charity will not end poverty but will keep poverty with us always. He is reminding his followers that he’s going to be killed for bringing God’s reign to earth, and it is their responsibility to continue the quest for justice.

This is our charge. Jesus came to bring good news to the poor. Will we continue his quest for justice?

The Rev. Dr. Liz Theoharis is co-director of the Kairos Center for Religions, Rights and Social Justice at Union Theological Seminary. She is also the co-chair of the Poor People’s Campaign: A National Call for Moral Revival with the Rev. Dr. William J. Barber II.