Building a Life of Faith. Support the Pentecost Offering.
Make A Donation Click Here >
Home › Into the light

Talking about addiction in church 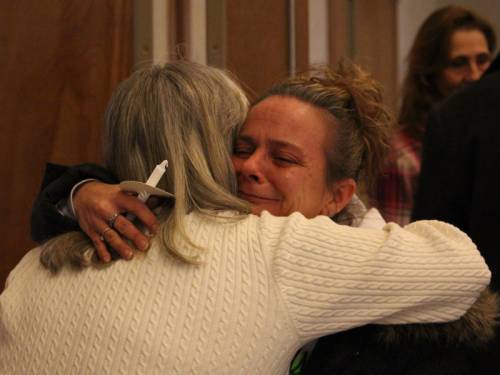 Lee McDermott is concerned. Opioid addiction is rapidly sweeping out of control in his neighborhood. And while the Presbyterian pastor in a rural southwestern Pennsylvania community is not only worried for those who are struggling with these habits, he’s also troubled by the fact that many religious leaders refuse to face the problem. And many congregants don’t want to talk about it. As a result, families end up living in fear and shame.

McDermott knows all too well about addiction. For 20 years prior to entering the ministry field, he was a counselor in a drug and alcohol rehabilitation center in West Virginia. That experience has given him a unique perspective and has made him aware that there’s an outreach that’s sorely missing in churches.

“God’s given me a wonderful gift. God allowed me to witness what God does best in the recovery of these people,” he said. “I’ve been able to see the amazing grace of Jesus Christ work in so many people and been privileged to be a witness to all of this.

“I prayed for all of my clients, and sometimes I felt that I was simply on a ride that God took me on to see what God can do. I didn’t feel I had a whole lot to do with the person’s recovery. It was all God at work. I was simply given the privilege to see all of this play out. To hear those stories, the church is really missing out on something that I seriously believe could revitalize and renew congregations all across the denomination if we’re just willing to deal with it.”

As a pastor McDermott discovered that merely mentioning addiction in the pulpit or in prayer opened a door for people to seek support.

“People are going to keep that secret unless they know you’re this person who is safe enough to share this secret with,” he added. “This is an issue that directly speaks to redemption, salvation, forgiveness and resurrection. Some of the stories that I’ve heard from recovering people are perfect examples of what the apostle Paul is talking about when he says, ‘Christ is making us into a new creation.’ I’ve seen people in recovery literally become new creations.”

McDermott is doing his part to change the culture of addiction ministry in his region. He helped to found the Presbytery of Redstone’s new Addictions Ministry Network, a group of pastors, laypeople and county social service employees trying to raise awareness of the issue and discern how God may be calling the churches to action. Several of the participants are in recovery themselves.

He coordinated the production of a 47-day Lenten devotional titled Into the Light: Join the Conversation. He reached out to area pastors and other church leaders to write the devotional’s selections, picking people who were either struggling with drug addiction in their own congregations or had a personal experience with it.

“The more voices that we have together and the more people talking about this, my belief is that the Holy Spirit is going to lead us to know what as congregations we can do regardless of size and where they can lend support to this whole endeavor,” McDermott said.

Churches in the Addictions Ministry Network have also hosted healing services for families struggling with addiction. County agencies as well as congregations have sponsored the services. The group is offering a Taizé-inspired worship template to any church that is interested. The message is: You are not alone.

“The services are open to anybody and everyone — anyone who’s been touched by addiction,” said Alice Tondora, the pastor at First Presbyterian Church of Johnstown, Pennsylvania, one of the organizers of the service. “Those who might be in the throes of it now could find inspiration from those who have the courage to tell their story and how they’ve come through it. Family members can find peace from hearing stories, from listening to words of Scripture, knowing that they are not alone.”

Worshipers can light a candle or write the name of a loved one on a cross as a way of praying for them.

“I like the way we pray together, with our hearts, our minds, our voices and our hands, especially as we light candles and find the strength to write a loved one’s name on the cross,” she said.

The healing service will rotate between the four districts in the Presbytery of Redstone in the coming months.

Opioids on the map

The Presbytery of Redstone is located in Appalachia, which extends from the mountainous regions of central New York state to central Alabama. Opioid addiction is rampant in that area, with Huntington, West Virginia, among the spots with the most severe issues.

Three hypodermic needles were recently found on the outdoor doorstep to Harkless’ office at the church, and one Sunday morning a vial was discovered at the church entrance. It was a startling discovery for Harkless to realize that even though the church is located in a residential, middle-class development, the drug problem is spreading into these types of neighborhoods. The problem has even reached into the church’s child-care center as three parents of children in the program have died in recent months because of drug overdoses.

Pastor David Richards says the addiction ministry at Second Presbyterian Church in Huntington is a “God thing.” The church has hosted recovery groups like Alcoholics Anonymous for some time. But then Bobby and Julie Borders showed up in the pews one Sunday. They run Advocate House, a nearby recovery house for men with addiction. Richards and Bobby Borders say they see God’s hand at work each step of the way.

As a recovered addict, Bobby wasn’t thinking about opening a recovery house, but he said God tricked him.

“I’ve always done construction work and I love helping people in recovery, and then I ended up putting the two together,” he said. “The work is really not of this world, and recovery really only works when people want their lives to change and they want to work on themselves.”

He wanted to provide a weight room for the men in recovery, but didn’t have the space. Second Presbyterian did. The weights and the men began to fill up some of the empty rooms, and a relationship developed between Advocate House and the church. The partnership includes a Bible study at Advocate House and incorporates Richards’ training in counseling.

“The men let themselves in and out of the church,” Richards said. “They have keys and the freedom to come and go. We don’t monitor it or check on them.”

One of those men is Matthew Adkins. He shared he’d been “drinkin’ and druggin’ for almost 33 years.” But after completing a sobriety program, he entered Advocate House and became a member of Second Presbyterian Church.

“God put me in front of Bobby,” Adkins said. “His belief in me and my belief in God have allowed me to better my life. It’s by the grace of God that I’m even alive. I made the decision to join this church and I haven’t looked back. It’s just a blessing to come in this building and worship my God.”

Ihley Chambers is also grateful for the relationship between the church and the recovery house. He remembers the date and time he first spoke to Bobby. He was desperate and at his wits’ end. Now he goes to the church every morning to work out, attends Bible study and works a steady job.

“Bobby showed me something that I never knew existed,” Chambers said. “I couldn’t see it because I was always high. It’s not just the drug that’s the problem. We have to change everything. We can get rid of the drugs, but if we are still the same person it will lead us right back to the drugs.” Chambers has stayed on at Advocate House, supporting others along the recovery path.

Support is the focus of a new ministry at First Presbyterian Church in Elgin, Texas, a town about 20 miles east of Austin. Several of those who attend the First Presbyterian Celebrate Recovery program have been addicted to methamphetamine, a problem drug in the area. Celebrate Recovery started 25 years ago at Saddleback Church, the California megachurch founded by Rick Warren. Today the program is used by churches of different denominations.

“Celebrate Recovery uses the language of hurts, habits and hang-ups,” said Mark McNeese, a pastoral assistant at First Church. “It’s a Christ-centered program based on the eight principles that are found within the Beatitudes. It also follows the regular 12-step program.”

“The goal is sobriety and recovery and to offer that in a welcoming environment,” McNeese said. “The purpose is just to bring people into a faith environment. I’m not a counselor. We’re there just to support each other and provide a safe place to talk and discuss things.”

Because Celebrate Recovery follows a similar outline as other rehabilitation programs, it allows anyone who is involved in programs like AA to be able to transition easily into this Christian program. It also calls for breakout gender-specific groups to further support the attendees.

“We just need to show people the God that loves us and the spirit that dwells within us,” McNeese said. “What are we doing for those struggling with addiction? The church has the answers to that. We just need to open our doors up and break down those barriers. Churches are good, safe places for people to come and work out some of those problems.”

Mike Givler is the communications coordinator for the Synod of the Trinity.