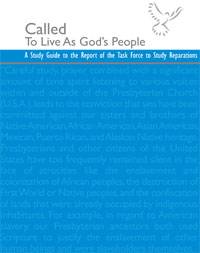 The 213th General Assembly of the Presbyterian Church (U.S.A.) acknowledged that the sin of racism has left a deep scar in the life of the church and our society.  It appointed a Task Force to study issues of reparations for African Americans, Native Americans, Alaskan Natives, Asian Americans, Mexicans, Puerto Ricans, and others who have experienced unjust treatment.

In its report, the Task Force recognized that the work of reparations is a process that requires continued study and reflection by the whole church.   This study guide is intended to acquaint Presbyterians with the contents of the Report of the Task Force to Study Reparations and to help facilitate more extended discussion of the issues raised by the report.

Each lesson is grounded in prayer and biblical study, reflecting the understanding of the Task Force that the process of reparations for the church is a spiritual one. This study guide is intended to be a beginning. Suggestions for further steps and additional resources are included, as it is the desire of the Task Force to engage Presbyterians in the active dismantling of racism in our church and in our society.