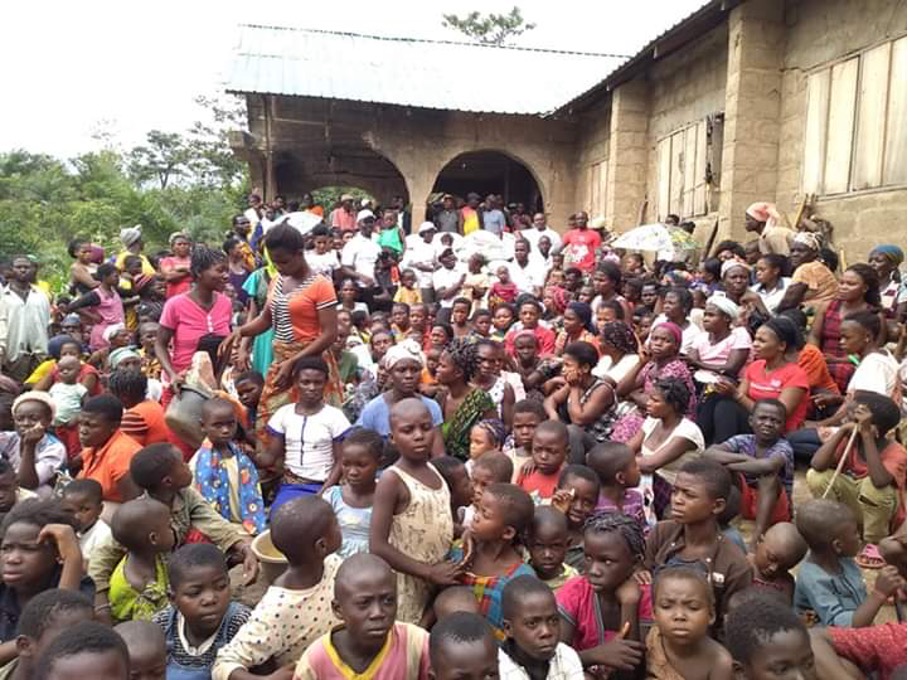 Refugees from NW/SW regions of Cameroon in Nigeria. Photo shared by Ayah Foundation

On the 24th of February 2022, the Russian military invaded Ukraine generating international outcry and concern for the atrocities and sufferings inflicted on the civilian population. Thousands of people have been leaving Ukrainian towns and cities to neighboring countries in Europe such as Poland, Hungary, Moldova, Slovakia and Romania. As an international peacemaker and social justice campaigner, I was sad and angry at yet another episode of human cruelty.

For over two decades, RELUFA, the organization for which I work, has been fighting against systemic problems that causes poverty and hunger. War is certainly a root cause of hunger and poverty as refugees and internally displaced persons abandon all their belongings in search of safety for themselves and their families. Since the Russian invasion of Ukraine, I am advocating for an end to the war the same like I have been campaigning against the war in the North West and South West Anglophone Regions of Cameroon for the last 5 years. Unlike in Ukraine where a sovereign country has invaded another sovereign country, the war in Cameroon an internal conflict where the national army is fighting against a segment of its population. The civilian population in both of these wars are the victims.

One of the convictions I have always had is that all wars are bad because they generate killings and hardship for the civilian population. The victims are particularly women and children including elderly men and women. This justifies my aversion to war and I do not think any war can be justified.  In barely a month, following the Russian invasion of Ukraine, more than 3 million refugees have fled Ukraine. Interestingly, these refugees are for the most part been generously received in host countries unlike most refugee situations that we have witnessed in recent times.

The European Union Temporary Protection Directive which allow the refugees to work and have access to welfare while in a European member country has been triggered and is contributing to the warm welcome of the refugees. I personally applaud this humane treatment of people in difficulty by host governments that have been largely positive. Paradoxically, the war in the North West and South West Anglophone Regions of Cameroon that has been going on for the last 5 years has not witnessed the same mobilization and attention. Nigeria is the closest neighboring country to Cameroon where refugees have fled and are settled in refugee camps and those who cannot leave the country escape as internally displaced persons to other towns in the Francophone Regions of Cameroon. Other options available for them is to try far off countries like Ghana, United Kingdom, Germany, United States of America etc.

However, the fate of people escaping from the war in Cameroon has been for the most part uninspiring. For instance, between 2019 and 2021, more than 80 Cameroonian asylum seekers were deported from the United States of America back to Cameroon, the same place from where they were escaping for their safety. Human Rights Watch in a report published on the 10 of February 2022 declared that these Cameroonian returnees suffered serious human rights violations – from torture and rape to enforced disappearance – on their return home.

As of today, over 700.000 people are internally displaced, 3.200 schools are non-functional and more than 3.9 million people are in humanitarian need as a result of the war in Anglophone Cameroon. Some humanitarian agencies try to provide support to Cameroonian Refugees and internally displaced people but the needs of those affected outweigh the available resources. The Russian invasion of Ukraine is happening thousands of miles away from Cameroon but some connections have engendered local consequences. Cameroon for instance is a net importer of wheat from Russia and Ukraine, and with the invasion, shortage of wheat has resulted in increased wheat and bread prices in the Cameroon local market. This has further complicated life for the internally displaced people and other people affected by the war in the Anglophone Regions of Cameroon.

The position of most people especially in Europe and America against the Russian invasion of Ukraine is clearly articulated and openly expressed. But from the foregoing observation, our society seem to have unequal attention to different wars. As a keen observer and campaigner for social justice, I am tempted to ask why there has been limited international attention to the war in Cameroon just to mention this one. A clear and strong position against the atrocities committed by protagonists has been missing although the war has lasted for 5 years. I have the firm conviction that all wars are bad and should never ever be started. They affect all human beings the same irrespective of origin, colour or creed. All war victims need our concern and support.

We are thankful to share that as of April 15, 2022, Temporary Protected Status (TPS) has been designated for Cameroon. This decision will benefit an estimated 40,000 Cameroonians currently living in the U.S. We continue to advocate for and work alongside our Cameroonian siblings.