In March 2021, PDA established a new grant opportunity for refugee or immigrant led organizations with a focus on immigrant rights. Awarded to those already engaged in public policy advocacy, the overarching goal of the grant program is to support the capacity of local/grassroots organizations so that they can connect local and personal experiences with the national dialogue and campaigns. Today’s blog post features Brockton Interfaith Community, one of the grant recipients and their recently formed Immigration Team. We thank Angel Cosme, Brockton Interfaith Community’s Community Organizer, for sharing a little of the history of how this team came into being. Their story pairs people with 30 years of community-organizing experience with immigrant residents willing to share their experiences and is a testament to how a small group of people in Massachusetts can make a big difference to a much larger community.

In response to COVID-19, Mutual Aid Brockton (MAB) was formed in April 2020 by the Brockton Interfaith Coalition. “Mutual Aid” is an appropriate name: as the immigrant families shared their lists of needs and concerns, they also became volunteers in assistance with one another. MAB’s Facebook group allowed residents to request assistance and share resources, as well as survey the community’s specific needs. Angel notes: “Due to feedback we received there, we launched multiple Listening Sessions for the Cape Verdean, Haitian Creole, Latinx and English-speaking populations in Brockton, asking two questions: 1. What do you like about Brockton? and 2. What concerns you about living here?”

After listening to 2,000 residents, the topic of immigration rose to the top of the list for the community as a whole. In response, the Brockton Interfaith Community (BIC) Immigration Team was formed in January 2021 and is now led by Teresa Aeilo, a former Honduran immigrant who is now a U.S. Citizen; Jeff Alcime, a Haitian international student; and Iolando Spinola, a Cape Verdean immigrant.

The Immigration Team soon partnered with Massachusetts Communities Action Network (MCAN) at the state level and Faith in Action (a national affiliate) to support a federal pathway to citizenship movement that was gaining national momentum. BIC joined MCAN’s campaign to encourage elected officials to sign a letter of support for citizenship; they were able to obtain 22 signatures including the mayor, superintendent, all but three city council members, the entire school committee and three out of the four state delegates representing Brockton.

Since then, BIC and other MCAN affiliates have organized meetings with U.S. Senate Majority Leader Chuck Schumer, U.S. Senator Markey, and the staff of MA Congressman Lynch to discuss support for a pathway to citizenship. Together they cohosted an essential worker press conference in Boston to highlight the important contributions of these immigrants toward sustaining the economy during COVID-19 and advocating for a pathway to citizenship.

To further increase the visibility of the Immigration Team within the community, BIC began a branding campaign. John Pepe, a local graphic designer, created the logo: a rooted tree—representing Brockton’s diversity—paired with the tagline “From many roots, one Brockton”. As part of this initial launch, John also developed five lawn signs demonstrating solidarity and support to immigrant brothers and sisters under the banner “Love thy Neighbor.” Extending this new brand into video, BIC hired Kreateurs Agency (owned by a Brockton TPS holder), Elsa Suxo of Suxo Productions (a Brockton DACA immigrant) and Hindsight Media, another Brockton-owned filmmaker. Their films about TPS, DACA, and the Driving Families Forward campaign will educate the Brockton community about the various systemic immigration issues the coalition wants to address. It is great to see BIC reinforcing its accountability to the immigrant community. 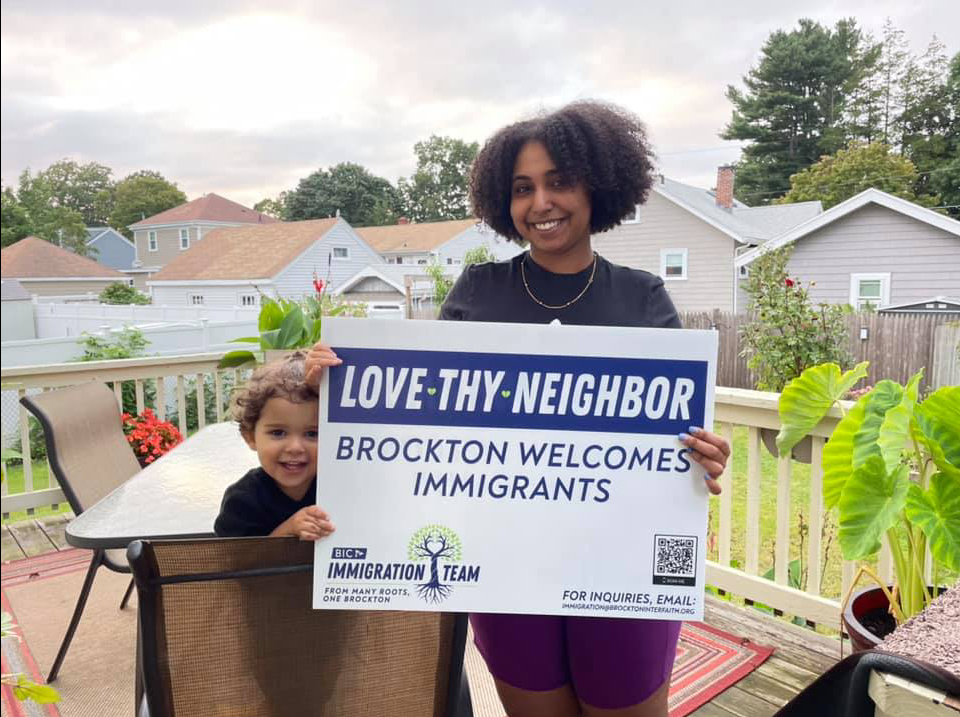 The design and printing of these lawn signs were supported by PDA.

The BIC Immigration Team invites both those most affected and those in solidarity to join them in the struggle for immigrant rights and equality. They have three immigration attorneys, a paralegal and many community members on their growing team. If you live in the Brockton area, come join them!

We are grateful to BIC for their witness and for sharing their story.  They are a powerful example of the connectional church and how local and national efforts can build on each other to expand our impact.

Both PC(USA) and Faith in Action (mentioned above) are members of the Interfaith Immigration Coalition (IIC), another way we bring local voices into the national conversation. As a national leader, the IIC creates devotionals and faith vigils to support national and local actions, organizes sign-on letters and social media campaigns. We work to center the voices of refugees, asylum seekers, immigrants themselves and those working “on the ground” in everything we do.

The PDA grant to Brockton Interfaith Coalition was made possible by generous gifts to the One Great Hour of Sharing offering.