Calvary Presbyterian Church (San Francisco, CA) has a long history of community engagement, living a life of faith and action. Because they continually search for ways to broaden their engagement with asylum seekers and refugees within the congregation and the San Francisco area, in January they invited PDA to lead an Adult Education series. In the process, we learned about the incredible faith that two individuals have placed in God—and in Calvary Presbyterian Church—and how this congregation is living out its call to welcome the stranger. May they be an inspiration to you. 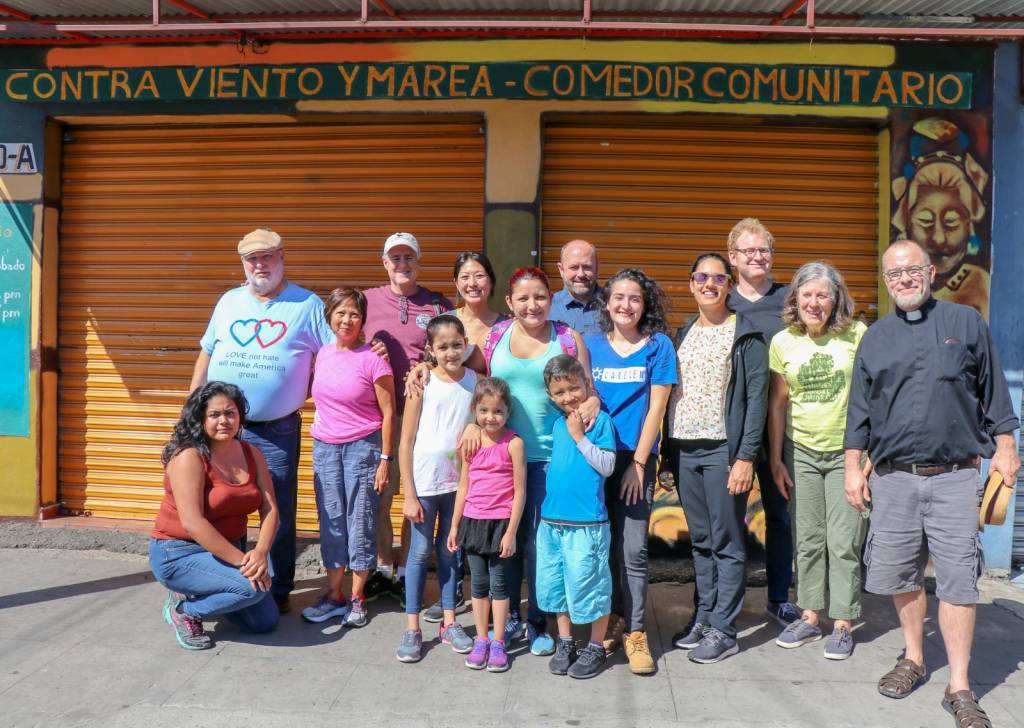 One church mission trip, that’s all it took. A small group of adults from Calvary Presbyterian Church in San Francisco traveled to the California-Mexico border in October of 2019. I had just marched with a large clergy cohort led by PICO California on ICE’s Otay Mesa Detention Facility, one of the many private for-profit immigrant prisons owned by GEO. Always go to where the pain is greatest; that is the call of social justice. Because of my experience there, I knew that what our church’s mission team would witness in Tijuana would be compelling, but I had no idea how much pain awaited us.

Guided by Caracen-Los Angeles, we visited several of Tijuana’s migrant shelters. We witnessed the long line of refugees that stand at the border, with children and belongings, waiting to receive a number for an appointment. Months later, when their number is called, they surrender themselves into the “ICE box”—a dark, refrigerated room wearing only the clothes on their backs, while U.S. immigration agents decide the course of their lives. The process is haphazard and corrupt, like throwing lots for another person’s fate.

Being an out gay preacher, I was especially glad we visited Casa de Luz, a safe house for LGBTQ migrants. We heard some of their stories, how they had formed a family of choice while walking from Honduras through Mexico, how some had been beaten along the way—all of them ostracized by their families and communities and churches. Been there.

Speaking through our Caracen-LA interpreter, a young man called Petter told of escaping his hometown in Guatemala after his father and brothers tried to murder him, twice. Like Joseph with the fabulous dreamcoat, Petter’s brothers had beaten him and left him for dead. Along the way, Petter found others like him on the margins of their caravan. They found Casa de Luz together.

Petter shared with our group that he just wanted safety. He wanted the stuff of biblical shalom: a community, a boyfriend, shelter, food, a purpose, to be able to imagine a better future. When I heard his unique story alongside all the other of transphobic sexual assaults and gay bashings, I recognized our story. I understand toxic masculinity and the need to hide. I understand running toward California for safety.

When we returned to San Francisco, I sat my husband down and shared Petter’s story. Before I could pop the big question of sponsorship, Lou interrupted me with his support, and Caracen-LA led us through the simple process of becoming Petter’s asylum sponsors.

He exited Otay Mesa just as Covid-19 was arriving and took his first flight. Our mission team reunited at SFO with flowers and tears. We drove Petter by the Castro’s ginormous rainbow Pride flag, welcoming him home to this city of refugees and misfits. We welcome him into our family of choice, if only until his asylum process is complete. With a little help, he’s gotten an attorney and some odd jobs.

When his court date comes, there will be a couple dozen Presbyterians accompanying him as he appears before the judge. All the older people here in San Francisco he’s helped during the lockdown will write letters to the court in support of Petter. And Lou and I will be sitting tall, praising God, proud of our beloved son, in whom we are well pleased.

A Knock at the Door: Alex

In March 2018, Calvary’s Session passed a vote to declare the church a sanctuary congregation. Providing sanctuary meant that we would accompany individuals to their immigration court hearings, educate ourselves further on immigration issues, and provide emotional and spiritual support to asylum seekers.  After we made this formal declaration, church leaders hung a banner on the building’s front facade to let the community know Calvary is committed to living into sanctuary and to welcoming immigrants and refugees.

This small act of hanging a banner probably didn’t mean a lot to most people walking by the church in Pacific Heights, an affluent neighborhood, but that banner stood out like a giant billboard to a stranger seeking help. One day a Honduran man spotted it on his way to work as a janitor at a nearby school and saw it as a sign from God that Calvary might welcome him.

This person, named Alex, has since become one of our friends. In the spirit of Welcoming the Stranger and in celebration of the first anniversary of Alex’s reunion with his family, we produced and premiered a video, “Calvary Answers a Knock at the Door.”

When horrific things are done in the name of Christianity, fewer people are drawn to a church community because they think all Christians are hypocrites and don’t walk the talk. As a large, urban congregation, Calvary’s Session realized we had an opportunity to follow Biblical teachings about welcoming the stranger and influence unjust laws that strip individuals of basic human rights and dignity.  Learn about Calvary’s sanctuary ministry here.

How can your church respond?

For many people like Alex and Petter, having a safe and supportive place to live can be the difference between being locked in a detention center or deported without even a chance to be heard. Sponsorship as mentioned in Petter and Victor’s story is a formal request made to Immigration & Customs Enforcement and is part of a faith commitment of Accompaniment.

To learn more about Accompaniment of asylum seekers and how to organize a team, PDA has two resources: Accompaniment Toolkit (2019) and COVID-19 Guidance.


5 Responses to “Leaps of Faith and a Commitment to Welcome”