This entry was shared with Presbyterian Disaster Assistance by our partner, the Department of Service to Palestinian Refugees (DSPR). It is written by Sylvia Haddad, Executive Director of DSPR.

On August 4, 2020 at 7pm local time, all buildings in Beirut felt the earth shake beneath them. As I live on the 10th floor of a 12 story building, my immediate reaction was to run down the steps as an earthquake was about to demolish my building. But seconds later a brief and sharp deafening strong blast stopped me in my tracks and sent me to the window to look up searching for Israeli planes bombing us, an experience we have had before. But a clear sky told me I was mistaken and so I ran to the balcony looking for smoke. Looking down I saw huge window frames flying down from the 4 flats beneath me landing on the parked cars. My immediate reaction was to look with my heart pounding, for the children of our doorman who play most of the day with their toys in a small area right to the side of the parked cars where the window panes had fallen. Relief engulfed me when I saw they were not there.

But my mind raced-what happened- whom shall I ask!!! No radio or TV as it was not our turn to have electricity. I then remembered my battery run radio which saved me and I started to hear the horror of what was happening as our excellent reporters had arrived at the scene and were trying to relay what was happening. As the electricity came on, I sat dumbfounded watching what was happening on the television and horrified by what I was seeing. Suddenly, the doorbell rang and my two grandchildren, who had gone to the mountains the day before, stood there. “Our house has been hit,” they said, “and our parents have gone to check.” Expecting a quick return of the parents, I was shocked to hear from them an hour later that the debris on the streets to their house in the Rmeil area of Ashrafiyeh was preventing them from reaching.

They also reported seeing the big Orthodox hospital of Beirut next to their house badly hit. Upon their return, the expression on my daughter’s face told the story. Their apartment, one mile and a half away from the scene of explosion, was badly hit and most of the contents damaged. We all looked at each other connected with one thought: thank God they were not in their house when the explosion happened. The next morning, the horror of what had happened began to unfold. A colossal explosion had taken place at the Beirut Sea-Port, which destroyed it completely.

A big number of the one thousand persons who worked there had disappeared under the rubble or in the sea. The main grain silo, which holds around 85 percent of the country’s wheat, was destroyed and so were many containers storing vital necessities of life such as medicines and life sustaining equipment were also gone. All the buildings across from the port were very badly damaged including the huge building of the administrative offices of the electricity company of Lebanon. The Lebanese Civil Defense and the Red Cross came to the rescue, evacuating the injured. The last to be rescued was the badly injured CEO of the company who is still struggling for his life.

Parallel to the port street on a higher level is the historic Jemaizeh street with its beautiful old Lebanese style buildings. It is one of the very few remaining old streets depicting the history and traditions of old Beirut. In a split second these historic buildings started to fall. People screamed as many disappeared under the rubble while others tried to escape. The same scene extended to many streets arriving at the extensive Orthodox hospital where many of the patients and staff had no chance of survival as parts of the structures fell upon them.

Searching for missing people continues as many carry the pictures of their loved ones and go around hospitals and morgues looking for them. Credible reports state that some 2,750 tons of ammonium nitrate unloaded from a disabled vessel in 2014 had been stored in a port warehouse. An accident – undetermined cause yet – caused the ammonium nitrate to explode. As time goes on, the consequences of this explosion will be even more serious than the immediate casualties and property damage. The port will no longer be able to receive goods especially that, Lebanon imports 80 percent of what it consumes and the government has lost one of its major income revenues.

Also, the timing couldn’t be worse as an economic crisis has devastated Lebanon for several months. The country’s currency has collapsed,  as a result of years of mismanagement and corruption. Hundreds of thousands of people can no longer buy food, medicine or fuel. The Lebanese watch helplessly as they see their savings wiped out and their purchasing power disappear, Meanwhile, the Coronavirus crisis still goes on and has placed great pressure on the health sector with patients filling the hospitals. The damage sustained by three of the main hospitals in Beirut as the result of the explosion has further reduced the capacity of the hospitals to cope with the injured, causing many of the hospital staff to use their parking lots for emergency care.

The Palestinian camps are far from the port where the explosion took place. Yet the JCC Centers in 2 of the nearer camps to Beirut, namely Dbayeh to the north, 10 miles away from the port and Sabra to the south east of Beirut felt the explosion. In Dabyeh, they felt the premise shaking and ran out fearing an earthquake while in Sabra, the glass of many windows was shattered and some doors were wrenched out of place.

At present all our youth and especially the youth of Dbayeh camp, who have been trained on helping others especially with the disabled and elderly, are working on different possibilities of how to help. This is the time to help a country which has hosted the Palestinian refugees for so many years and we intend to do whatever we can to show our gratitude with the hope of getting help from our friends and partners.

Wishing all of you continued safety,

PDA is supporting the humanitarian response to the explosion in Beirut by disbursing four solidarity grants to partners on the ground. Solidarity grants are used to address emergency needs such as medicine, food, shelter, WASH (water, sanitation and hygiene) and more. To support PDA’s response, designate gifts to DR000007.

Image of the Port of Beirut 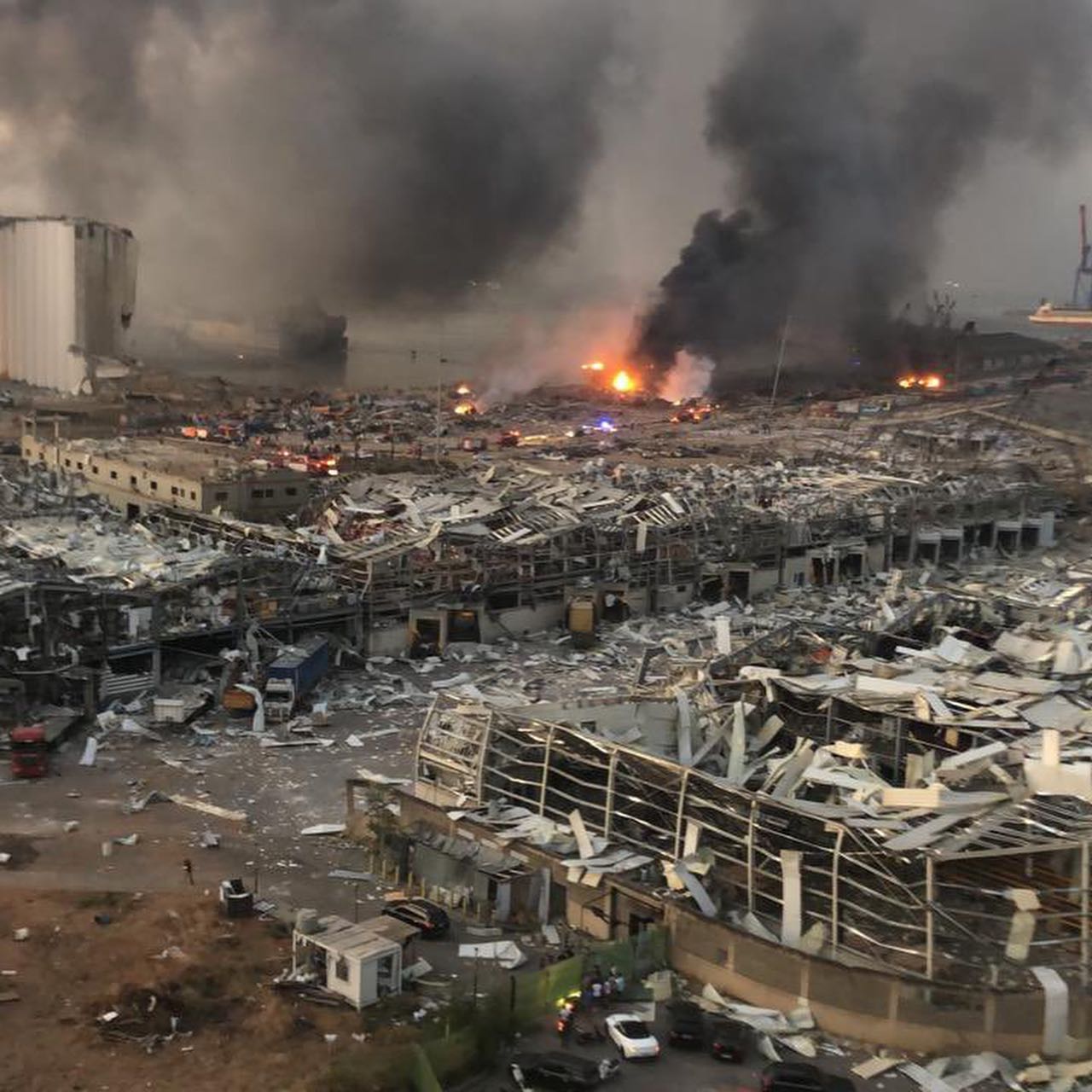