The number and demographics of Central American asylum seekers coming to the U.S. border through Mexico have been shifting over the past several years, at a time when the overall number of people approaching the southern border is down. One of the most significant changes was the increased number of young families, primarily mothers with very young children from El Salvador, Guatemala and Honduras.

In the past 18 months, the U.S. government has introduced a number of punitive measures in an effort to stop Central Americans and other asylum seekers from reaching the U.S. through the Mexico border or effectively make an asylum claim. 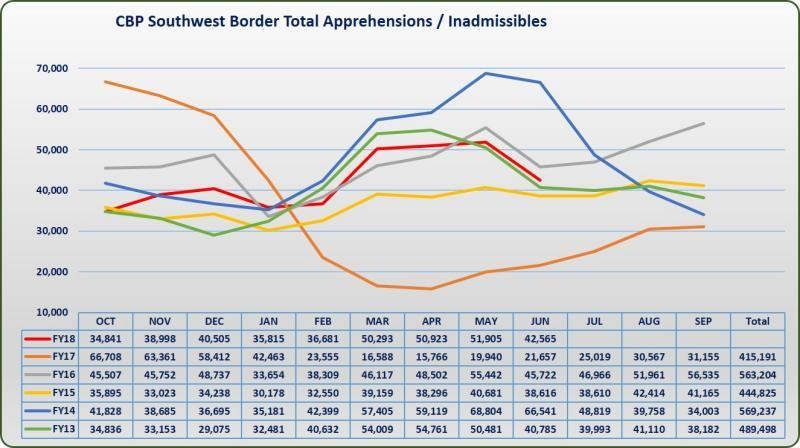 After the “Zero Tolerance” Policy was announced by AG Sessions, almost 3,000 children were separated from their parents.  Parents were charged with a criminal misdemeanor for entering the U.S. illegally, placing the adults in the custody of the U.S. Marshall Service and transferring the children to the custody of the Office of Refugee Resettlement (ORR)/Dept. of Health & Human Services.  The ORR program was set up in 2003 to care for unaccompanied children, not for children whose parents were also in detention.

Total number of children separated under the Zero Tolerance policy:

A court ordered the U.S. government to stop the separation of families and to reunify all those who had been separated in 2 phases:  children under 5 years old by July 10 and children between 5 – 17 years old by July 28th.  According to ORR, as of August 1, the following were reunited: 1820 children have been discharged/released by the ORR. Of these, 378 aged out, were reunified with a parent already in the interior or other releases prior to the court decision; 1,442 returned to parents, reunified with parents who were still in custody; 20 not separated by DHS.

Of the 1,442 children reunified with parents still in custody, some of them are now in DHS family detention.

As of August 1, there were still 711 children in ORR Custody.  Of these children, 431 parents were removed or took Voluntary Departure (now outside the U.S.). For these children, efforts to reunify the children or release them to another relative or appropriate placement is on-going.  The Government has asked for help from the International Red Cross and other non-governmental organizations to help with family tracing to find the parents.

There are reports that parents did not understand what they were signing when they agreed to leave their children behind, including some allegations of coercion.  These cases are being taken to court. 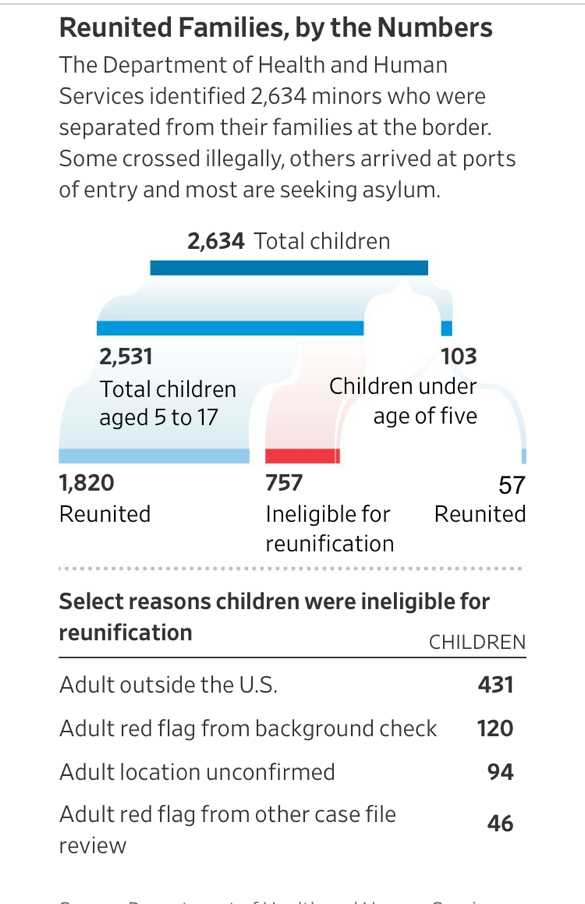 The June 20th Executive Order continues to criminalize the parents for seeking asylum and replaces family separation with expansion of family detention with intention to hold families indefinitely . The length of detention of children is currently limited to 20 days and would require overturning the Flores Agreement or legislative change.  All of these policies are clearly stated as efforts to “deter” migration.  Customs & Border Patrol Officers (CBP) have been seen standing on pedestrian bridges at ports of entry in Texas and Arizona.  Anyone approaching the U.S. side when there is an officer there have been told to come back later if they don’t already have a passport and visa or other entry document.

In addition, the President has called for the ending of asylum claims based on domestic violence and gang-related violence – two of the areas of asylum that frequently are cited for asylum claims from the Northern Triangle.

Parents and other adult asylum seekers are quickly being deported by applying this new policy to determining if someone has a “credible fear.”  Immigrants who show that their fears are credible can stay in the U.S. and advance to the next stage of the asylum process. Those who don’t are subject to deportation.  Under the “Operation Streamline[1]” system, these asylum seekers are deported before they have any meaningful way to assert their need for protection in the U.S.

The Senate Judiciary Committee held a 3- hour hearing on family detention and family separation on Tuesday, July 31, 2018.  This is part of Congress’ responsibility to provide oversight of government operations.  Questions of oversight of the treatment of both adults and children in detention were raised – reports of abuse and deprivation.  In addition, statements were made by members of Congress to propose changes to the detention of children through legislative change.

FY2019 Appropriations for DHS has already passed the committees and must be voted on by full floor by September 30th:

[1] Ten years ago, a new policy was named “Operation Streamline.” It is known for mass hearings in which up to 80 migrants are arraigned, found guilty, convicted and sentenced simultaneously for “improper entry,” a misdemeanor. The policy has long been decried by immigrant rights advocates. But the mass hearings, as shocking as they are, are only the tip of the iceberg. Lesser known is the widespread expansion of felony “re-entry” prosecutions and the mass incarceration of migrants that  that came with the Streamline program.

House Recess is until September 4

Resources for Legislative Advocacy during the August Recess:

Opportunities to Educate and Resources to Act

PDA has disbursed initial response grants to Pacific Presbytery and De Cristo Presbytery ($7,500 each) to help separated families.  A grant request is in the process for Mission Presbytery for new “Courts & Ports Observation” project with Texas Impact. To support our work, designate gifts to DR000095.