By Susan Krehbiel, PDA Catalyst for Refugees and Asylum

The impact of new U.S. Government policies and procedures related to the resettlement of refugees into the United States has been severe. Faced with the largest humanitarian displacement in modern times, the U.S. Government set the lowest resettlement target since the passage of the 1980 Refugee Act. And yet, even this lowest goal of 45,000 refugees will likely not be reached. A scorecard by the Refugee Council (USA), a national coalition of refugee resettlement and refugee rights organizations shows that the U.S. is failing.

In the first 5 months of this federal fiscal year, which began on October 1, 2017, only 8,635 refugees arrived. That is less than half of those who should have arrived under a goal of 45,000 refugees. Or to state it even more starkly, U.S. policy changes have resulted in an 83% reduction in program services from the prior year.

A series of Executive Orders, new operational requirements, delayed travel by U.S. personnel to conduct interviews and the expiration of clearances all add up to slowing down the U.S. resettlement processes. 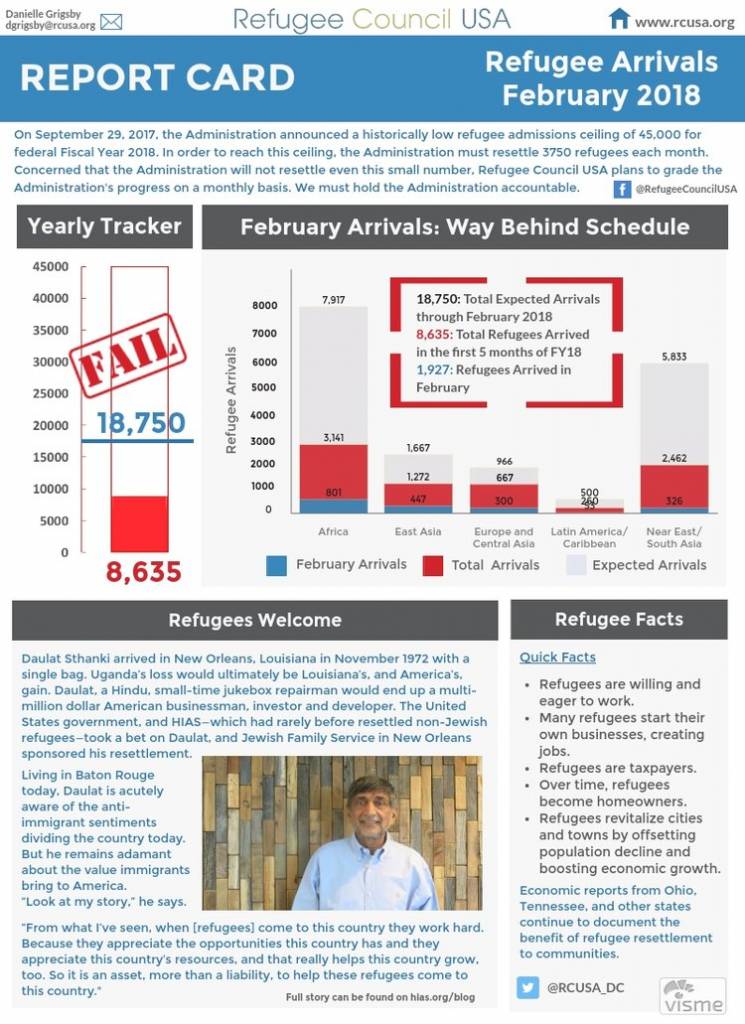 What is the impact on the refugees themselves?

Thousands of refugees who had been offered resettlement by the U.S., and cleared by U.S. authorities, wait in limbo situations overseas. After going through months of vetting, health screening and other steps, they must go back into the line and start over. In Africa alone, that’s 13,000 refugees who will not arrive this year.

Family members awaiting reunification must continue to struggle – both those overseas who pray for the day when their separation will end and those already in the U.S. who must live a divided life trying to set down roots here even as they worry about their spouse or children left behind.

Increased raids and detention by the Immigration & Customs Enforcement (ICE) here in the U.S. has also been felt by resettled refugees. Fear of being wrongly swept up in an ICE enforcement action has pushed resettlement programs to offer a “Know Your Rights” orientation for newly arrived refugees about their immigration status and their rights before an ICE officer.

What is the impact operationally?

Local resettlement offices that are paid for initial services on a per capita basis of actual arrivals are cutting staff or closing down initial resettlement services all together.

The U.S. Department of State is under pressure to cut the size of the resettlement network in keeping with lower resettlement goals for the foreseeable future. The State Department has announced that they will not keep offices that receive fewer than 100 refugees this year. Such an immediate contraction does not acknowledge the refugees resettled over the past several years who need additional support, referrals and family reunification services.

As a result of the new network policy, national non-profits like Church World Service, must place refugees in fewer locations. For example, CWS has reduced its number of local placement sites by a third – from 33 locations to 22.

Where is the opportunity in all of this?

All this means opportunities for local congregations and Welcome Teams as well. We can also make this type of “pivot.” We know that the resettlement experience is slow and integration is a long process. What exciting new partnerships and possibilities are waiting for us to grab onto? Where is God calling you to listen, to speak or to act?

As Presbyterians, we have a tradition of welcome. Learn more by watching this video:

Thanks to the Refugee Caucus of the US House of Representatives, Refugee Council USA and Church World Service for the briefings that informed this update.