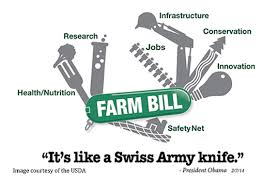 One of the top legislative priorities for Congress is to address the reauthorization of theFarm Bill in 2018. The Farm Bill is an enormous piece of legislation that determines a broad range of  food and agriculture policy from the livelihood of farmers and funding for rural development to efforts surrounding food insecurity and nutrition. Among the particular programs funded through the farm bill is SNAP or Supplemental Nutrition Assistance Program, formerly know as food stamps. The proposed bill would cut the food assistance program by $20 billion and add strict work and reporting requirements for recipients of food stamps. Should this version of the bill pass, up to 2 million people may no longer be eligible for SNAP. This after passing the largest tax cut in history, most of the benefit of which will accrue to the wealthy. It is therefore necessary to remember the role to be played by people of faith to witness and advocate in solidarity with the least of these who rely on this entitlement program to access a dignified life. Indeed, our mandate as Presbyterians is clear in the Confession of 1967 which states

“The reconciliation of humankind through Jesus Christ makes it plain that enslaving poverty in a world of abundance is an intolerable violation of God’s good creation….A church that is indifferent to poverty, or evades responsibility in economic affairs, or is open to one social class only, or expects gratitude for its beneficence makes a mockery of reconciliation and offers no acceptable worship to God.”
– The Confession of 1967 (Inclusive Language Version), Book of Confessions, 9.46

The first Farm Bill draft, the Agriculture and Nutrition Act of 2018 (H.R. 2), was filed in the House of Representatives on April 12, 2018 and passed through the House Agriculture Committee on April 18, 2018. The Presbyterian Church (U.S.A.) is deeply concerned that this legislation represents a fundamental and cruel shift in the reach and impact of the Supplemental Nutrition Assistance Program (SNAP), which would harm millions of Americans who are struggling to feed themselves and their families. We call on legislators to pass a Farm Bill that protects against hunger by strengthening SNAP and other federal nutrition assistance programs—not one that adds to the problem. We will continue to oppose any policies that hurt single mothers, children, military families, older Americans, rural communities and working people.

SNAP is the Nation’s Frontline Defense Against Hunger

SNAP Is Not a Jobs Program

This Bill Reveals a Breakdown in Longstanding Bipartisanship

An Attack on Women and Children