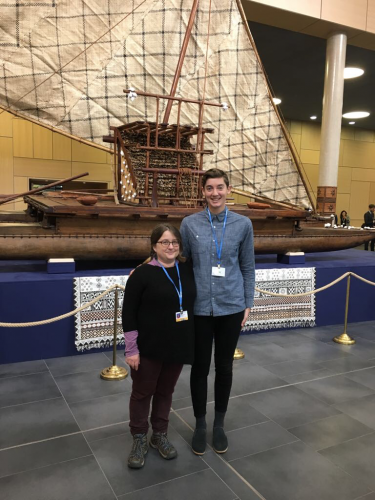 Nora Leccese and fellow Presbyterian, Bee Moorhead of Texas Impact stand in front of a Fijian double-hulled sailing canoe called a Drua. The Drua is a reminder to all negotiators that we are all in the same canoe when it comes to climate change.

I landed in Bonn as an official observer to the COP 23 on behalf of the PC(USA) on Monday, eager to participate and advocate on behalf of creation and all God’s people. This year, Fiji holds the Presidency of the 23rdConference of the Parties (COP) being held in Bonn, Germany. This is a crucial time when nations of the world meet to advance the aims and ambitions of the Paris Agreement and achieve progress on its implementation guidelines.

COPs are always run by a designated nation and for the first time this will be one of the small island nations that are most at risk from the sea-level rise and extreme storms that climate change is bringing. Fiji’s prime minister, Frank Bainimarama, is the COP president, though the summit is being held in Germany for practical reasons. Five islands in the Solomon Islands have submerged underwater and six more have experienced a dramatic reduction in shoreline due to man-made climate change.

The Paris Agreement’s central aim is to strengthen the global response to the threat of climate change by keeping a global temperature rise this century well below 2 degrees Celsius above pre-industrial levels and to pursue efforts to limit the temperature increase even further to 1.5 degrees Celsius. 1.5 C is the highest temperature increase we can reach and still prevent the most devastating impacts of climate change. Studies have found that at 1.5 C, tropical coral reefs stand a chance of adapting and reversing a portion of their die-off in the last half of the century. But at 2 C, the chance of recovery vanishes and tropical corals would be virtually wiped out by the year 2100. At present the pledges and targets announced by countries in the Paris Agreement put the world on track towards a warming of 2.7°C by the end of the century. Limiting warming to 1.5 C is still possible, but will require decisive and urgent action at this COP and from citizens around the world. 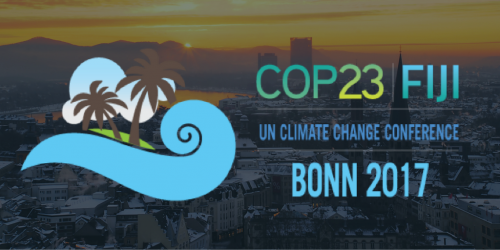 As the world’s second biggest polluter and richest nation, the US has an undeniable responsibility in these negotiations. Although President Trump announced the US withdrawal from the Paris Climate Agreement in June, it will take until 2020 to complete our exit. We as people of conscience can still put pressure on our own government by building a strong movement for climate justice and making our own commitments to curb greenhouse gasses.

And the moment has never been more urgent. Evidence continues to mount of the devastating impact of global warming.  Just last month, the federal government itself released a report encouraging the administration to take climate change risks into account when making policy decisions. Extreme weather events, more frequent and intense because of climate change, have cost the federal government over $350 billion in the last decade. The report makes clear that these costs and other climate change-associated risks, like heat-related deaths and coastal home damage, will continue to rise if the government does not create policy based on the reality of climate change.

A recent analysis from the United Nations Environment Program also warned of the dangers of inaction. The analysis revealed a large gap between pledges made by countries in the Paris Agreement and the actual greenhouse gas reductions needed to prevent dangerous changes in our climate. The report did not, however, take into account the consequences of the U.S. withdrawal from the agreement, which would make the gap even wider.

Presbyterians have long acknowledged the burden of climate change and environmental injustice, which first and foremost falls on those who are contributed least to the problem. The 218th General Assembly (2008) presented a policy recommendation on climate change that emphasized a commitment to stand with “the least of these.” The 219th General Assembly (2010) also approved an overture that affirmed “concern for God’s creation is, for every Christian, an essential way of living faithfully.”

Rev. Jimmie Hawkins stated in June after the announcement that the US would withdraw “I urge you, rather than listen to politicians who are way out their lane when talking theology, listen to those who have an informed faith, who are in conversation with the 97% of climate scientists who agree that warming trends over the last decades are due to human influence.”

With a challenge before us, we must dig deep into our faith and spiritual fortitude. In preparation for the COP 23, I revisited “The Power to Change” Approved by the 218th General Assembly:

The challenge we face is daunting. The temptation to despair is real. Only God can give us the power to change. Our Reformed tradition reminds us that it is God who created the earth and saw that it was good, God who sustains the earth and seeks to hold its processes together, God who judges sin and greed, and God who reveals in Jesus Christ that love and justice are the essence of God’s power. God is the inexhaustible source of energy for personal, social, and ecological transformation. Although we are complicit in the evils we face, we can repent of our own sinful misuse and abuse of the Earth as we confess our sins. As recipients of God’s endless mercy, this redemptive energy frees and empowers us to be good stewards of God’s creation.