The church is responding to the Syria-Turkey earthquake, GIVE NOW!
Make A Donation Click Here >
Home › Worship › The Christian Year › The Great Vigil of Easter 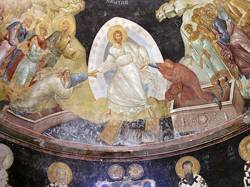 14th century fresco of the Resurrection from Chora Church, Istanbul.

The Easter Vigil is officially the first service of Easter. In fact, Christian feast days generally begin at sunset on the previous day (best known in the example of Christmas Eve). For this reason, the duration of the Easter Triduum (“three days”) is from the evening of Maundy Thursday to the evening of Easter Sunday. The same principle applies to the Jewish reckoning of liturgical time, in which the sabbath begins at dusk and continues to nightfall of the following day. This is reflected in the priestly “refrain” of the Genesis 1 creation story: “and it was evening, and it was morning, the nth day.”

The Easter Vigil has four movements: (1) the Service of Light, a celebration of the light of Christ at which a new fire is kindled from which the Paschal Candle is lit, (2) the Service of Readings, which includes as many as nine readings from the grand story of salvation of the Old and New Testaments interspersed with psalms and canticles, silence and prayers, (3) the Service of Baptism, the primary annual occasion for baptisms (particularly in the early church) and a time for the reaffirmation of the baptismal covenant and (4) the Service of the Eucharist, a joyous feast in the presence of the risen Christ and an anticipation of the eschatological banquet of the realm of God.

The brightest jewel of Christian liturgy

The Great Vigil of Easter is the brightest jewel of Christian liturgy traced to early Christian times. It proclaims the universal significance of God’s saving acts in history through four related services held on the same occasion.

Lectionary Readings for the Easter Vigil

Year A
Year B
Year C

An Easter Vigil on death row

Pastor David Phillipy of Trinity Presbyterian Church, Nashville, shares this account. (Here is the order of worship they used, adapted and abbreviated from the Book of Common Prayer.)

As a former prison chaplain, I provide direction for a meaningful presence of ministry from loving members of Trinity Presbyterian Church at Riverbend Maximum Security Institution in Nashville, Tennessee. This includes a pen pal program, a study group, mentoring an inmate pre and post release with financial support from Trinity in the Prisoner Reentry Program and ministries on death row. In addition seventeen of our members did Christmas caroling on Unit 2 death row in 2010 and at a maximum security unit in 2011.

On death row at Riverbend, some inmates are allowed contact visits and group study and worship experiences in a small visiting gallery. I have brought four concerts from musically talented people from Trinity to death row. One of our members teaches voice at Belmont University and he now teaches voices lessons to four inmates on death row. One of his students expressed a desire to join Trinity and was received into membership at Trinity in a service at Riverbend.

The Great Easter Vigil was held on death row on Saturday, April 7, 2012. Eight inmates attended with six Trinity members present. There was a time of fellowship following the service. One of the inmates who has not been active in religious services at Unit 2 in his twenty years on death row was present. Raised in his early years as Lutheran, by his early teens he was living a troubled life which led to his current imprisonment on a death sentence. He had thrown away his Bible and other religious literature which he had in his cell. However, not to disappoint the prison chaplain, he attended the service and was deeply moved by the experience. He asked to see me on my next visit. At that visit he expressed the desire to become a member of Trinity Presbyterian Church. As the Spirit continues to lead we will move in that direction.

The Easter Vigil can be a great opportunity to form faith, teach tradition, and build community in your congregation—all while celebrating the good news at the heart of our faith, that Christ is risen from the dead! The Office of Theology and Worship has provided these guidelines for planning an intergenerational Easter Vigil. The document includes step by step instructions for organizing and preparing for the service, along with banner ideas, musical suggestions, ways to present readings, and child-friendly prayers for the Thanksgiving for Light, Thanksgiving Over the Water, and Great Thanksgiving.

Lessons from the Easter Vigil

Read a blog post on preparing for the Easter Vigil from the Office of Theology and Worship.

Resource for the Great Vigil of Easter

“Rejoice (This is the Night)” hymn

This hymn setting of the traditional Easter Proclamation (or Exsultet) may be used in a procession with the paschal candle at the Easter Vigil.

Good Friday | Resurrection of the Lord