Victor occasionally returns to the U.S. to visit congregations.  Email him to learn about his schedule and invite him to visit your ministry.

About Victor and Sara’s ministry

The Diyar Consortium is an ecumenically oriented organization initiated by the Christmas Lutheran Church of Bethlehem. Diyar implements contextual and holistic programs that support the civic, cultural, psychosocial, physical, educational, and spiritual wellbeing of Palestinians. Victor Makari serves as a regional consultant for the consortium’s Religion and State Program. It examines the relationship between religion and governments in the Arab World and how a dominant religious majority’s views, prejudices, and even doctrine infringes on the rights of religious minorities, women and youth. Sara Makari edits English language publications produced by the Diyar Consortium and engages in a ministry of hospitality in the couple’s home.  In his work as regional liaison, Victor facilitates the joint mission work of the Presbyterian Church (U.S.A.) in Israel, Palestine, Jordan and Egypt and supports the ministries of Presbyterian mission co-workers. He and his wife, Sara, continue to serve in partnership with the United Church of Christ and Disciples of Christ and one of his responsibilities lies with the Religion and States Program housed at the Dar Al-Kalima College in Bethlehem.

The Presbyterian Church (U.S.A.) for decades has promoted a just peace in the Middle East. The church pursues peace in the region acting in solidarity with the Palestinian Christian community and partner churches across the Middle East.  A key goal of the PC(USA)’s Middle East peace initiative is to help end the Israeli occupation of East Jerusalem, the West Bank, and Gaza. The church advocates for the right of Israelis and Palestinians “to live in peace within secure and recognized boundaries free from threats or acts of force.” The occupation has contributed to a large exodus of Christians from Palestine. In 1920 about a tenth of the population was Christian, but now estimates place the Christian population at around 1 percent. Despite declining numbers, the Christians of Palestine contribute a significant voice to the cause of peace in the Middle East.

About Victor and Sara

Victor and Sara’s roots run deep in the soil of the Middle East. Both spent their formative years in the region, and there they experienced Christian nurture that set them on a path toward mission service.

Victor, a native of Egypt, says his sense of call came early in life. “My vocation to mission was awakened through the study of Scripture pointing to the use of the word ‘go’ as a key word in the vocabulary of Christ and throughout the New Testament.”

Sara grew up in Lebanon and Egypt as the daughter of Presbyterian missionaries Kenneth and Ethel Bailey.  During her upbringing, she learned the joys and challenges of cross-cultural mission, developed a deep love for Middle Eastern people, and became fluent in Arabic. All of these experiences, she says, helped prepare her to follow God’s call to Israel-Palestine.

After his ordination in Egypt, Victor was sent by the Delta Presbytery of the Synod of the Nile to the Philadelphia Presbytery as a “minister in mission.”  That move began a 45-year ministerial career for Victor in the United States.  Still, he continued his bonds of friendship with Middle Eastern Christians while serving in parish and campus ministries in the US. Immediately prior to his mission appointment, Victor served for 20 years as the PC(USA)’s area coordinator for the Middle East. At various times, his responsibilities also extended to Europe, South Asia, and Southeast Asia.

Both Sara and Victor are pleased to be working alongside Palestinian Christians as they seek to bring peace to the land of Jesus’ birth. They are grieved by the thousands of lives lost in the Israel-Palestinian conflict and saddened by the yoke of occupation that continues to encumber their Palestinian neighbors. Every day they see the results of the occupation, which include high unemployment; shortages of basic necessities such as water, clothing, electricity, and heating fuel;  loss of land and livelihood; restricted movement; and displacement. “I salute the fortitude and tenacity of hope of the people of this land and dearly appreciate all that makes my living and serving here possible,” Sara says.

Every year thousands of Christian visitors from around the world stream into Bethlehem, where Victor and Sara live. Many, however, are oblivious to the plight of Palestinians in the city and in other regions nearby.

“Part of the satisfaction of serving here is to help visitors to comprehend some of the realities and challenges with which our neighbors live,” Victor says. The couples’ task, he explains, includes challenging “the church to live up to its high calling.”

Victor began preparing for ministry at the Evangelical Theological Seminary in Cairo. He also holds theological degrees from Princeton and Columbia seminaries and a PhD in Middle Eastern and Islamic studies from Temple University.

Prior to entering mission service, Sara worked for 14 years as an editor for the Foundation for Middle Eastern Studies in New Wilmington, Pennsylvania. She has also been an administrative assistant at Tantur Ecumenical Institute in Jerusalem and a high school teacher at the American Community School in Beirut, Lebanon.

Sara earned a BA degree in modern European history from Grove City College and an M.Ed. degree from Westminster College.

Watch a video of Victor and Sara Makari 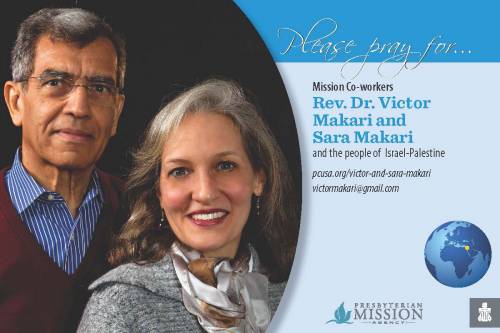 In his work as partnership liaison, the bulk of Victor’s time is spent providing consultative support for the witness of the church to issues of…

Give in honor of the ministry of Victor and Sara Makari