Ian and Jhan are periodically in the United States and available to speak to congregations as their schedule permits. Email them to extend an invitation to visit your congregation or organization.

Jhanderys Dotel-Vellenga and Ian Vellenga serve in Nicaragua with the Council of Protestant Churches in Nicaragua (CEPAD), which works to improve the lives of economically impoverished communities by promoting justice and peace. Working closely with their Nicaraguan colleagues and supervisors, Ian and Jhanderys assist in CEPAD’s international partnership program, helping to coordinate U.S. church delegation visits; developing new partnerships as requested by CEPAD leadership; facilitating communication between partner bodies; and encouraging and accompanying partnerships as they deepen their connection and understanding of doing mission together.

Nicaragua declared its independence from Spain in 1821 and has functioned as an independent republic since 1838. Its Caribbean coast was under the control of the British in the first half of the 19th century, but gradually the area was ceded to the Nicaraguan government. In the 1970s, violent protests against governmental corruption and manipulation led to a civil war that brought the Marxist Sandinistas to power. The Sandinistas governed Nicaragua until l990, when President Daniel Ortega lost the election. Though he was defeated in 1996 and 2001, he successfully sought the presidency in 2006, was reelected in 2011, and again in 2016. In April of 2018, clashes began between the government and protestors wanting to see Daniel Ortega step down. In the first three months of the conflict, an estimated 300 were killed, over 2000 were injured, and dozens disappeared. It remains to be seen what the future holds for Nicaragua, but the Presbyterian Church (U.S.A.) is committed to walking with the people of Nicaragua through its long-standing partnerships there.

Nicaragua is one of the poorest countries in Latin America, but in recent years it has been able to increase access to potable water, boost life expectancy, reduce infant and child mortality, and raise immunization rates. The PC(USA) began its involvement in Nicaragua in 1972 in response to a massive earthquake that devastated the capital city of Managua. Nearly 60 percent of Nicaraguans are Roman Catholics, and Protestants compose almost a quarter of the population. Most other Nicaraguans belong to other religious groups or claim no religious affiliation.

Both Ian Vellenga and Jhanderys Dotel-Vellenga say that from a young age they were drawn to mission service.

Ian comes from a family that is steeped in service: his grandparents were commissioned nearly 100 years ago as missionaries in Egypt; his aunt and uncle are both missionaries in China; another aunt was one of the first women to serve in Ghana in the Peace Corps starting in the 1960s; and his father currently serves a small church in North Carolina as a Presbyterian minister. As a young adult, Ian served with Appalachian Service Project, “a Christian ministry … that inspires hope and service through volunteer home repair and replacement in Central Appalachia” (asphome.org). He was also a PC(USA) Young Adult Volunteer (YAV) in India. While in India, he worked at a church-funded school in Cherthala, Kerala, interacting with school-age children and teenagers. It was while serving in India that Ian started feeling called toward mission work. After returning from India, Ian interned at Redwoods Presbyterian Church in Larkspur, California. Shortly after graduating from San Francisco Theological Seminary in 2014, he was ordained as a deacon at St. Luke Presbyterian Church in San Rafael, California.

From her earliest school days, Jhanderys has had a passion for mission and the empowerment of those who are less fortunate. That passion has stayed with her into her adult life. She explains, “I continue to grow in the realization of the importance and beauty of such ideas and principles. My aim is to develop this approach to life and to share it with others through everything I do.” Paul’s injunction to Christians in Romans 14:19 has shaped her philosophy of mission: “Let us therefore make every effort to do what leads to peace and to mutual edification.”

From 2010 to 2011, Jhanderys served with the Caribbean and North America Council for Mission (CANACOM) as part of the Joint Mission Action Team (JOMAT), teaching Spanish and personal development in Her Majesty’s Prison in Saint George, Grenada. In 2011, she assumed the roles of liaison and interpreter for the CANACOM and the Caribbean and North American Area Council (CANAAC), a subsidiary of the World Communion of Reformed Churches. Jhanderys has also participated in activities and workshops relating to intercultural relationships and gender issues at the national and international levels with the World Council of Churches, the Latin-American Council of Churches (CLAI), CANACOM, and CANAAC. In 2015, she interned for three months at Calvary United Methodist Church in Harrisburg, PA, where she worked with the church’s mission team to bring awareness to issues such as human trafficking and gender-based violence. In July 2017, Jhanderys completed an internship at Marin General Hospital in Greenbrae, CA, where she served as interim chaplain, providing emotional and spiritual support to patients, their families and members of the hospital staff.

Jhanderys and Ian view true mission as multilateral. They know that relationships with people “of other traditions and ethnicities are being shaped by the Holy Spirit who, like the wind, ‘blows where it chooses’ (John 3:8) and enables us to discern how to nurture a loving community of people.” This, Jhanderys and Ian believe, is “God’s intention for all God’s creation and the mission of the church.” Through the example of Nicaraguans, who exude faith, perseverance, kindness and hospitality despite all of the difficulties life presents to them, the couple is inspired to live a more faith-driven life. Jhanderys and Ian say that “the current struggle of the people of Nicaragua for justice and righteousness shows how hard they are willing to fight for what they believe is right and true.” Jhanderys and Ian strive to spread the message of love and hope, not only to the people of Nicaragua, but also to congregations in the United States. They are committed to shining a light on the needs of the people in Nicaragua so that Presbyterian congregations will be better able to work alongside their Nicaraguan brothers and sisters in meeting those needs.

Jhanderys’ “forever home” is Santo Domingo in the Dominican Republic, where she grew up and first experienced the love of God. Ian grew up in North Carolina, and it was here that his sense of mission was formed. He relocated to California to receive his theological education at San Francisco Theological Seminary, where he and Jhanderys met.

Ian and Jhanderys are currently members of Nutbush Presbyterian Church in Townsville, North Carolina. Jhanderys is also a member of the Iglesia Evangelica Dominicana (Dominican Evangelical Church) in the Dominican Republic. 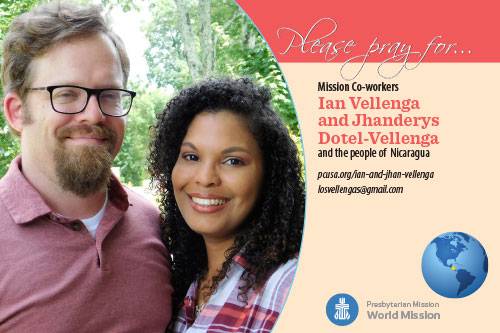