Michael and Rachel periodically visit the U.S. to speak to congregations. Email them to extend an invitation to visit your congregation or organization.

About Michael and Rachel Weller’s ministry
Michael and Rachel Weller were appointed as PC(USA) mission co-workers to serve the Ethiopian Evangelical Church Mekane Yesus (EECMY) in 1994. At that time Michael served as a teacher and advisor at the Gidada Bible School in Dembi Dollo while Rachel was responsible for family life and home-schooling their four children. For ten years Michael served the PC(USA) as the Regional Liaison for the Horn of Africa, coordinating with partners in Sudan, South Sudan, and Ethiopia.

In February 2017 Michael returned to the work he loves: training future church leaders. He teaches in Gambella, Ethiopia as a teacher at the Don McClure Bible School and the Manpiny Theological College. The schools are ministries of the East Gambella Bethel Synod and the West Gambella Bethel Synod, respectively. Rachel facilitates the work of Community Health Evangelism (CHE) in both synods. CHE is a program that gathers people together to identify and use available resources to improve their health situation and to learn truths from the Bible leading to the life abundant that Jesus Christ promised. The program also teaches and encourages individuals and families to reach out in discipleship to neighbors and friends

Country context
Ethiopia is the second most populous country in Africa. Ethiopians are proud to have never been colonized by any European nation, though the country was briefly occupied by Italy from 1936 to 1941. After being ruled by various monarchies for many centuries, the reign of Haile Selassie ended when he was overthrown by a communist regime known as the Dergue, which in turn was ousted in 1991 and a democratic republic was established and remains in place to this day.

Though Ethiopia has struggled with issues of severe poverty and hunger, it had one of the fastest growing economies in the world. The economy is now leveling off, but a strong middle class has emerged.

The Presbyterian Church (U.S.A.) has worked in partnership with the people of Ethiopia since 1919. The church that emerged as a result of the Presbyterian presence which called itself the Bethel Church and in 1974 merged with the EECMY. The six synods of the EECMY that use “Bethel” as part of their name identify as that part of the church with strong Presbyterian ties. The people feel a strong kinship with Presbyterians in the US. Michael and Rachel feel privileged to be a part of both communities and to be a conduit through which a deeper mutual understanding of God is communicated.

About Michael and Rachel Weller
Michael and Rachel met in Egypt where they were each serving in the Volunteer In Mission program. After they married, Michael completed seminary and then pastored a rural church in Southwestern Virginia. They accepted the call to Ethiopia five years later. The Wellers served the EECMY in Dembi Dollo for nearly 7 years and then moved to Addis Ababa in 2002. During that time, Michael worked with the Majangir people, nomads settling on the outskirts of the Dembi Dollo, to help the local synod assist these people to live settled lives according to the new government mandate. Michael mentored one of the synod leaders in cross-cultural development and church planting. When that work was completed he took an interim position at the Mekane Yesus Seminary in Addis Ababa and as the coordinator of the Bethel Synods Coordination Office, the office through which the Bethel Synods of the EECMY relate to partners around the globe, and especially the PC(USA). In 2007 Michael became regional liaison for the Horn of Africa.

From Addis Ababa, Rachel worked as a coordinator for the medical work in the East and West Gambella Bethel Synods, which are both located in the western region of the country. This work led to the introduction of the Community Health Evangelism program which she currently facilitates.

Michael was born in Durham, North Carolina and was raised in Norfolk, Virginia where he became a member of Coleman Place Presbyterian Church. After graduating from Randolph-Macon College in Ashland, Virginia Michael joined the PC(USA)’s Volunteer In Mission program as a teacher at Ramses College for Girls in Cairo, Egypt. Then he completed an MDiv at Union Theological Seminary in Richmond, Virginia and became a pastor to the Stone Memorial Presbyterian Church in Marion, Virginia.

Rachel was born and raised in Ethiopia where her parents were Presbyterian missionaries. Returning to the US after high school she attended Sterling College in Kansas briefly and then completed a diploma in nursing at West Penn Hospital School of Nursing in Pittsburgh, Pennsylvania. Rachel served as a Volunteer In Mission in Tanta, Egypt at the Tanta American Hospital. She and Michael met while on a retreat for the volunteers at Mt. Sinai.

The Wellers’ four children are now grown and live in the U.S. Brian lives with his wife and children in Massachusetts; he works for the US Air Force. Amira lives and works in Redding, California developing her skills as an artist. Thomas, a certified FAA airplane mechanic, is in New Jersey. Lydia, an avid gardener and hopeful lawyer, is in Norfolk, Virginia. 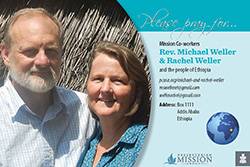 Use this card as you pray for mission co-workers Rev. Michael and Rachel Weller. The card includes a photo and overview of their work. Michael…

Give to the ministry of Michael and Rachel Weller