Judy occasionally returns to the U.S. and is available to visit congregations. Email her to extend an invitation to your congregation or organization.

Rev. Judy Chan has been under appointment in Hong Kong by the Presbyterian Church (U.S.A.) since 1994, several years before the “handover” of 1997, when Hong Kong’s sovereignty changed from being a British colony to a Special Administrative Region (SAR) of China.

Judy is seconded to the Hong Kong Christian Council, where she is executive secretary for communications. Her responsibilities include serving as producer for the ecumenical Christian broadcasting ministry on public radio station RTHK, editor of English publications, and liaison with international churches. She is also involved in the Refugee Ministry Group, a network of Christian churches and organizations concerned about asylum seekers and refugees in Hong Kong. Her ministry is a joint appointment of the PC(USA) and the Disciples of Christ/United Church of Christ’s Common Global Ministries Board.

Judy is a member of the World Association for Christian Communication and has served as vice chairperson (2005-2008) and treasurer (2008-2014) of the Asia region.

China is the world’s most populous country and is home to the second largest economy. The Chinese culture is almost 4,000 years old, and many important elements of the modern world were developed in China, including paper, credit banking, the compass and paper money. Christianity was introduced in China in 635 CE by Nestorian missionaries. Many Protestant groups, including the PC(USA), began sending missionaries to China in the 19th century.

The Communist Party came to power in 1949 and instituted a strict authoritarianism that controlled both society and the economy. By the 1980s, governmental restrictions began to loosen, which resulted in the exponential growth of China’s churches and its economy.

Hong Kong is a Special Administrative Region (SAR) of China. It was a British colony for more than 150 years before it was returned to Chinese sovereignty in 1997. Its transfer to China was in accordance with an 1898 agreement between the British and Chinese governments that gave the British a 99-year lease on Hong Kong and surrounding islands. Hong Kong is one of the world’s largest financial centers and is home to over 7 million people.

Much has happened since the 1997 transfer: the Asian economic crisis, the SARS epidemic, demonstrations against proposed subversion laws, the ongoing struggle for constitutional reform, and the “Occupy/Umbrella Movement” for democratic elections that made worldwide news in late 2014. All of these have challenged the church in Hong Kong to put their faith into action while maintaining Christian unity to bring hope and love to the city.

While the citizens of Hong Kong are proud to be reunited with the motherland, they are also passionate about preserving Hong Kong’s unique heritage and status as one of the leading global cities in China. The people of Hong Kong strive to resolve tensions with their compatriots and the government on the mainland for the best realization of the 1997 “one country, two systems” policy. The Christian community seeks to bring God’s justice, peace and reconciliation while sharing the Gospel of Jesus Christ with all.

Judy was born and reared in Mississippi as a second generation Chinese-American. Having grown up as part of a tiny minority in the South as well as a Baptist, she embarked on a life-changing journey to integrate her spiritual identity with her personal identity as gifts from God. After receiving her bachelors (1977) from Baylor University, she had her first experience in mission in New York City for two years under the Metropolitan New York Baptist Convention. It was in New York that she realized she loved being a big city girl and mixing with people from all different backgrounds and cultures. Feeling a call to ministry, Judy studied her MDiv (1982) at Yale Divinity School, during which she joined the Presbyterian Church USA. A formative year in Clinical Pastoral Education at St. Elizabeths Hospital in Washington, DC was followed by ordination as the Associate Pastor of the Chinese Community Church (1983-1991) in the nation’s capital. She remains a clergy member of National Capital Presbytery.

In 1994, Judy and her family were invited to serve in mission in another big city at the Hong Kong Christian Council. This opportunity to live and work in Asia has been a great privilege and opportunity to serve God and the church. In many ways, the move brought her full circle in her journey inward and journey outward. The words of praise in Psalm 139:13-14 have proven true for her:

“For it was you who formed my inward parts; you knit me together in my mother’s womb. I praise you, for I am fearfully and wonderfully made. Wonderful are your works; that I know very well.”

During her 25 years of mission service in Hong Kong, Judy studied part time for a Master of Journalism (2007) at University of Hong Kong to strengthen her communications skills and later for a Doctor of Theology (2015) at the Divinity School of Chung Chi College of the Chinese University of Hong Kong. Her dissertation topic was “Hospitality and Refugee Ministry,” later published as the book No Strangers Here by Pickwick Publications.

Judy and her husband, Joe, have raised four children — Fiona, Grace, Amy and Joel. Joe is a native of Hong Kong and works as a teacher in the hospitality field. They look forward to whatever adventures God has in store for them in the future in the “small city with a big reputation.”

Watch a video of Judy Chan 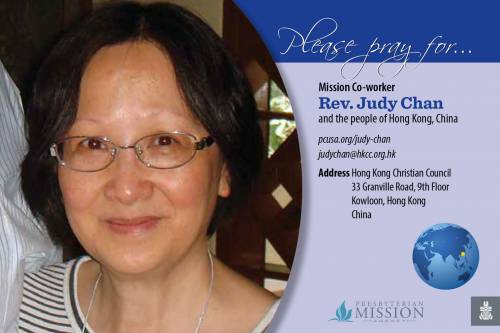 Use this card as you pray for Mission Co-worker Rev. Judy Chan. The card includes a photo and overview of her work. Judy serves as…

Give to the ministry of Judy Chan