Janet addresses poverty and gender equity issues alongside the Church of Central Africa Presbyterian’s Livingstonia Synod Women’s Guild in northern Malawi. As Women’s Guild program associate, she focuses on these priorities, and she supports the Women’s Guild director in equipping Women’s Guild members at the presbytery and congregational levels. Janet serves in a secondary capacity as acting facilitator for women’s and children’s interests, maintaining contact with women’s structures and leadership of PC(USA) partners in Ethiopia, Malawi, Zambia and Zimbabwe and assisting them as they promote the well-being of women and children. Janet also engages with Presbyterian Women and other US constituencies who wish to promote these efforts.

According to the International Monetary Fund, Malawi is among the seven poorest countries in the world. As in other areas where poverty is widespread, women and children are disproportionately affected. The PC(USA)’s partner churches in the region are committed to helping women and children escape poverty and its devastating effects.

After more than two decades of mission service, Janet Guyer still experiences the gladness she sensed when she first answered God’s call to mission.

Janet says her calling is described best by author and Presbyterian minister Frederick Buechner, who wrote: “The place where God calls you is the place where your deep gladness and the world’s deep hunger meet.”

In pursuit of her deep gladness and the world’s deep hunger, Janet went to Thailand in 1990 under Presbyterian mission appointment. She worked with the Church of Christ in Thailand in community development ministries and helped the church develop its response to the HIV and AIDS pandemic. Thailand was a familiar place for Janet, for she grew up there as the daughter of Presbyterian missionaries John and Betsy Guyer. She was ordained there in 1994 on behalf of Pittsburgh Presbytery.

Janet’s next assignment, however, placed her in unfamiliar territory. In 2002, she was invited to take her experience in HIV and AIDS ministry to Africa. For the next 11 years, she served as a regional AIDS consultant working with partner churches in Southern Africa as they sought to prevent the spread of AIDS and care for those affected by it. She also helped concerned Presbyterians in the United States engage with African partners in response to the pandemic.

While African and Thai contexts are radically different, Janet nevertheless sensed her deep gladness amid the world’s deep hurt as she stood with Africans struggling with the HIV and AIDS crisis. The joy of her vocation has lived on in her current role. “Working with things that concern women and children, their gifts, their needs, and their relationships with the church and community are a deep gladness. At the same time, I know that there is a deep hunger, a need, in these countries. I walk alongside my African sisters and brothers as we address this hunger together.”

Although Janet grew up in the home of missionaries, she never expected that one day she would serve in international mission. “The call to mission came as a surprise, but it did make sense as I evaluated the gifts God had given me and the needs of the world,” she explains.

Like many who serve in mission, Janet says her goal in mission service is for her position to become unneeded. “My greatest joy will be if, one day, my sisters and brothers in the various African churches with which I work say, ‘Thank you for all you have been and done. I think we can do this by ourselves now.’”

Janet brings extensive educational credentials to mission service. She earned a Master of Divinity from Pittsburgh Theological Seminary and a Master of Social Work from the University of Pittsburgh. Previously, she received bachelor’s and master’s degrees in education from the University of Oregon. Prior to her mission appointment, she taught at the International School of Bangkok in Thailand and in the South Umpqua School District of Myrtle Creek, Oregon.

She remains a member of Pittsburgh Presbytery.

Watch a video of Janet Guyer 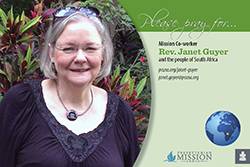 Use this card as you pray for mission co-worker Janet Guyer. This card includes a photo and overview of her work. Throughout the Bible we…

Give in honor of the ministry of Janet Guyer