Esther returns to the U.S. a few months every year to visit congregations.  Email her to extend an invitation to visit your congregation or organization.

Esther serves as staff in the office of the chaplain at Payap University in Chiang Mai, Thailand. She is also a lecturer in pastoral care and counseling in the McGilvary College of Divinity of Payap University. Payap was founded by PC(USA)’s partner, the Church of Christ in Thailand, in 1974 and is the first private university in Thailand, serving about 3500 students with 600 faculty and staff. About 10 percent of the students and 30 percent of the faculty and staff are Christian. The chaplain’s office has six staff members, and they are responsible for worship services, required chapel programs, small prayer groups, retreats, workshops, international work camps, pastoral visits at times of sickness and death, and counseling. The challenges of strengthening the Christian community on campus and finding creative and meaningful ways to share the gospel with Thai college students are considerable. Esther asks your prayers that the staff will develop a more passionate spirituality and deepen as a loving community, discovering more of the freedom Christ gives us to live life as it’s meant to be lived.

Esther also serves as chair of the board of Chiang Mai International School (CMIS), which seeks to provide educational excellence in a caring Christian community that respects and celebrates diversity. As the CMIS website explains, “Founded as part of the Church of Christ in Thailand, the national Protestant church, the operation of the school and all relationships within the school community are based upon Christian principles and beliefs with religious services and public prayers offered in the Christian tradition. Within this spirit, CMIS encourages students to learn about God’s love and the Christian faith so they can make their own personal and intelligent response to it. CMIS also warmly welcomes students and staff from differing religious backgrounds, cultures, and beliefs.”

“Chiang Mai is a wonderfully congenial place to live,” writes Esther, “and is a major mission center for Asia.” Esther is active in the English-language church and its outreach ministry to the international community of Chiang Mai. “As the world gets smaller,” she says, “opportunities for communicating the good news of God’s grace are growing. It is exciting to be able to minister to Thai people and others from all over.”

“Thai” means “free,” and Thailand, known as Siam until 1939, prides itself in being the only Southeast Asian nation that was never colonized by a Western power. In the 1980s, its economy changed from one based primarily on agriculture to one more focused on the industrial and service sectors. The economy’s fast growth sent a substantial number of people from Thailand’s rural areas to urban centers. More than half a million Thai people are living with HIV/AIDS, a high rate of infection that is partly the result of a large-scale sex industry. Nearly 95 percent of the population are Buddhist, 4 percent are Muslim, and fewer than 1 percent are Christian. Presbyterians began mission work in Thailand in 1840, and Presbyterianism is one of the Protestant traditions that helped form the Church of Christ in Thailand (CCT). While the CCT’s membership is relatively small, its work in health, education and social ministries is widely known and appreciated.

Religious freedom is a strength in Thai society that makes sharing the freedom offered us in Jesus Christ easier. Esther Wakeman has experienced the freeing grace of Jesus Christ in her life and family in a powerful way since 1996. It is her great joy to share the good news of Jesus’ ability to set us free with the freedom-loving Thai people.

Esther is a native of North Canton, Ohio, and a graduate of Malone College in Canton, where she received a Bachelor of Arts in psychology. She went to Chiang Mai in 1979 to teach English at Prince Royal’s College and met and married Rob Collins in 1980. They have three children, Nathan, Paul and Anna. From 1984 to 1993, the family commuted between Chiang Mai and Pasadena, California, while Esther earned an M.Div. and Ph.D. in clinical psychology from Fuller Theological Seminary. After her ordination they returned to working and living full-time in Chiang Mai.

Esther is accompanied by her husband, Rev. Rob Collins, a retired mission worker. After his retirement, he continued for a time as a mission volunteer, teaching New Testament courses at the McGilvary College of Divinity of Payap University. In addition, he helped with production of the New Testament portion of the Thai Study Bible.

Rob was born in Tarkio, Missouri, and graduated from Tarkio College. He first went to Thailand in 1960 to teach English. In 1964, he enrolled in Pittsburgh Theological Seminary, where he received a Bachelor of Divinity degree in 1967. After ordination to the ministry of Word and Sacrament, he returned to Thailand with his first wife, Dee, who died in 1979.

Watch a video of Esther Wakeman 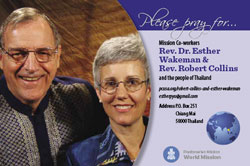 Esther is on staff in the Chaplain’s office and teaches in McGilvary College of Divinity at Payap University in Chiang Mai, the first Christian university…

Give to the ministry of Esther Wakeman