Dustin and Sherri periodically visit the US and are able to visit congregations as their schedule allows. Email them to extend an invitation to visit your congregation or organization.

About Dustin and Sherri Ellington’s ministry

Though the Bible isn’t fragile, Dustin and Sherri Ellington believe it should be interpreted with care. Well-trained pastors who can faithfully proclaim the Scriptures is a growing need in southern Africa. This drew the Ellingtons to Justo Mwale University, which trains pastors for Zambia, Zimbabwe, Malawi, Mozambique, South Africa, Namibia, and beyond. Dustin serves as a lecturer in New Testament, and Sherri is site coordinator for the PC(USA)’s Young Adult Volunteer (YAV) program in Zambia. The Ellingtons’ current assignment came after they served for five years in theological education in Egypt.

“I love investing myself in current and future leaders of the church in Zambia and surrounding countries,” Dustin says. “I teach people to interpret Scriptures for themselves and their ministries, which gives them a skill that can keep them encouraged in their ministries and also enable them to share truth with God’s people.”

The Ellingtons moved to Zambia in 2010 with their two sons, Clayton and Christopher, who spent much of their childhoods in Egypt.

Zambia has a population of 15 million people, which includes some 70 ethnic groups. About 90 percent of the population identify themselves as Christian. Most other Zambians follow African traditional religions, and some are either Muslim or Hindu. Presbyterianism was introduced into Zambia by Scottish missionaries in the 1860s. The churches in Zambia, like those in other parts of Africa, struggle with leadership needs because of fast growth: Zambia has gone from being 0.3% Christian in 1900 to approximately 90% Christian today. Often there is just one ordained pastor for several congregations and/or thousands of Presbyterians.

Zambia has a per capita gross domestic product of $4,100, which ranks it 177th among 230 countries of the world. In addition to poverty, Zambia struggles with burdens created by the rapid spread of infectious diseases, including HIV/AIDS. According to a 2014 estimate, about 12 percent of the adult population is living with HIV/AIDS.

About Dustin and Sherri Ellington

“The reason we are living out our callings in mission service is that we see a deeply felt need overseas,” Sherri says. “We are happy to be among those meeting it and having our own lives enriched in the process.”

In mission service, Sherri has sensed a call to be a “soil preparer,” who through prayer, friendship, teaching, conversation and writing helps people be ready to receive the Word and bear fruit. It’s a role that she draws from the parable of the sower and the seed in Mark 4.

“Living cross-culturally as a family is a challenge that demands patience, energy and imagination,” Dustin says. “It also brings many of the deepest joys of cross-cultural ministry as we learn together and take on plenty of adventures.”

Sherri knew before their departure for Zambia that it would be challenging to live as a privileged American among people in deep poverty. Nevertheless, the Ellingtons headed to Zambia with a hope that is grounded in the good news of Jesus Christ.

“I am inspired by the opportunity that African believers have to give witness to the gospel while responding to the challenges of their continent,” Dustin says.

Sherri sees her husband’s ministry of training pastors as an important part of the African church’s ongoing growth and development. Since the birth of their first child, Sherri has been a homemaker and has done a variety of tasks in team ministry. Prior to that, she taught in the Visalia Unified School District in Visalia, California, from 1995 to 1998. She was a teacher in San Mateo and San Francisco from 1992 to 1994.

Dustin holds a Ph.D. in New Testament from Duke University and an M.Div. from Princeton Theological Seminary in Princeton, New Jersey. He has a Bachelor of Arts in religious studies from Stanford University. Sherri also has a Bachelor of Arts from Stanford — hers is in human biology with an emphasis in child development. She is credentialed to teach elementary education.

Dustin was ordained to the ministry of Word and Sacrament in March 1995 by the Presbytery of San Joaquin. Sherri is a member of Triangle Presbyterian Church in Durham, North Carolina.

Watch a video of Dustin and Sherri Ellington 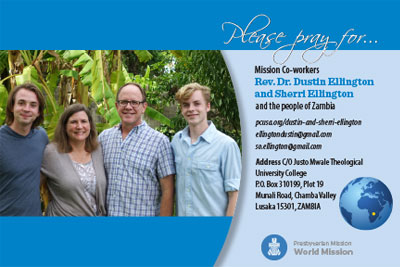 Dustin and Sherri are assigned to Justo Mwale Theological University, where Dustin teaches New Testament, Greek, and preaching. In this region of Africa, the church…

Give in honor of the ministry of Dustin and Sherri Ellington