Ruth occasionally returns to the U.S. and is available to visit congregations. Email her to extend an invitation to visit your congregation or organization.

Ruth Brown works in Ghana’s Northern Region with the Evangelical Presbyterian Church of Ghana (EPCG) to build leadership for community health programs. She supports church leadership in developing Community Health Evangelism (CHE) programs. The CHE approach is developed through Bible study and discussion of Christian life and responsibilities for all creation, particularly for neighbors. Study groups are taught strategies for health promotion and disease prevention. Community members learn to identify their local health concerns and resources and to implement programs for positive, sustainable change. Ruth assists the church in collaborating with existing community programs to promote continuity of care.

Ghana has been called one of the friendliest countries in the world (Forbes, 2011). The West African country has growing economic prosperity and a democratic political system.

Differences in population, religion, education, and health are quite marked when considering Ghana’s overall statistics compared to those of Ghana’s Northern Region (NR):

The overall population of Ghana is roughly 28 million, while that of the Northern Region is 2.4 million.

Maternal deaths and deaths of children under the age of five are grave concerns for Ghana. The World Health Organization (WHO) reports that in 2015 there were 319 maternal mortalities per 100,000 births, and that in 2016, children less than five years of age died at a rate of 58.8 deaths per 1,000 live births. In 2016, Catholic Relief Service reported that despite national strides to strengthen health services, maternal and infant mortality and illness remain higher in the Northern Region than the rest of the country.

The principal economic practice in the Northern Region of Ghana is subsistence agriculture. Due to its proximity to the Sahel and Sahara, this region is much drier than southern areas. The region’s savanna receives an average of 30 to 40 inches of rain annually.

Ruth Brown brings over 25 years of public health experience to mission service and a deep commitment to serve Christ by empowering people. She works with communities to address the root causes of poor health and poverty rather than just treating symptoms. Ruth strives to help communities evaluate their situations and develop solutions that will serve their entire neighborhoods. “This building up of people to enjoy abundant life in Christ is the work of social justice, which, according to what my family and my church have always taught me, is the will of God,” she says.

As a seasoned public health professional, Ruth brings a storehouse of knowledge to her duties. From 1999 to 2010, she was a health service specialist for migrant farmworker families with Rural Family Development, an agency managed by the Virginia Council of Churches. Previously, Ruth was director of health promotion for the Somerset County Health Department in Maryland. She has also been a health education coordinator for a tri-state migrant health program on the Delmarva Peninsula, a homeless center manager in Virginia, and a high school English teacher in North Carolina and Virginia.

Ruth’s history on the African continent goes back to 1979, when she began service in the Peace Corps, first in the Ivory Coast, where she taught technical English in an agricultural university, and then in Central African Republic, where her focus was health promotion. Her experience serving Africans with the Peace Corps made an impression on her: “The joy and faith of the people, their courage, hard work and good humor, and, in particular, the determined will of the women to assist their children and their families have been powerful examples for me.”

From 2011 to 2016, Ruth was a mission co-worker for community development with the Presbyterian Community of Congo in the Democratic Republic of Congo. Programs she helped initiate and support include Promoting Human Rights for Rural Women in Kasai, Ditekemena Program to support vulnerable children, Healthy Children Program (a program promoting childhood nutrition using Community Healthy Evangelism), and a micro-savings and loan program targeting rural women.

In 2018, Ruth was assigned to northern Ghana, and she welcomes the prospect of working with new people with unique needs and conditions. “I am looking forward to working with and learning from members of the Evangelical Presbyterian Church in Ghana (EPCG).” With the Ghana Mission Network, the EPCG has expressed needs for assistance in areas of water catchment and purification, sanitation, prenatal health, vulnerable women and children, and sustainable agriculture.

Ruth hopes her life will bear witness to God’s concern for the dignity of all people. “I hope that I can support the current ministry of churches in Ghana in such a way that more people will recognize that all people, regardless of nationality, sex, age or physical abilities, are blessed creations who have full citizenship in the Kingdom of God.”

A guiding scripture for her life is Micah 6:8: “He has told you, O mortal, what is good; and what does the Lord require of you but to do justice, and to love kindness and to walk humbly with your God?”

“During his life on earth, Jesus Christ perfectly fulfilled what the Lord requires,” Ruth says. “As Christians, we are to show our love with such action.”

Ruth holds an undergraduate degree from Davidson College and a master’s degree in public health from the School of Public Health and Tropical Medicine at Tulane University. She is an ordained deacon and ruling elder and member of Ginter Park Presbyterian Church in Richmond, Virginia.

Watch a video of Ruth Brown 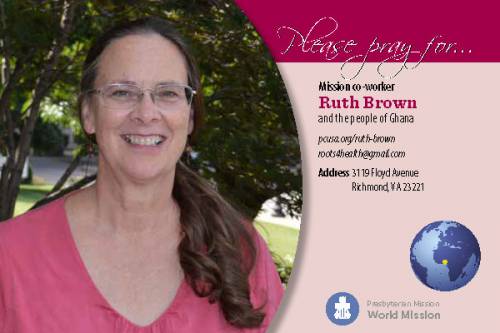 Use this card as you pray for Mission Co-worker Ruth Brown. The card includes a photo of her and an overview of her work. Ruth…

Give to the ministry of Ruth Brown