As educational consultants for indigenous peoples, Richard and Debbie Welch’s first responsibility is to establish relationships with presbyteries serving the indigenous membership of the National Evangelical Presbyterian Church and the leadership of the national church. Through these relationships, they help indigenous people gain access to primary, vocational, and theological education. Based in Cobán, Alta Verapaz, Guatemala, they seek to build bridges between Guatemalan education projects and U.S. supporters of Guatemalan education.

Guatemala is the most populous and the most industrialized country in Central America. It is also by far the country with the highest percentage of indigenous population. Most of the indigenous population descended from the Mayans, whose highly developed civilization from 300 to 900 C.E. made magnificent advancements in architecture, music, and mathematics and built an extensive trade network.

Spanish conquistadors overran present-day Guatemala in the 1500s and forced the descendants of the once great Mayan culture to serve colonial estate owners. Since gaining independence in 1821, the country has been ruled by the military for most of its history. The intense concentration of wealth and land has left the indigenous population and other poor people in rural areas almost totally disenfranchised. Most Guatemalans are Roman Catholics, but there is also a sizable Protestant presence. The National Evangelical Presbyterian Church of Guatemala was founded by Presbyterian missionaries from the United States in 1882.

About Richard and Debbie Welch

Richard and Debbie’s call to mission has its roots in what they call “a curious interest” in their presbytery’s mission partnership in Guatemala. “Over time it slowly grew into a passion and excitement about the transformative impact the partnership was having on our Inland Northwest Presbytery, our partners, and us personally,” Richard says.

Their involvement in the partnership continued to grow, and then one day they were approached about the possibility of long-term mission service in Guatemala. The suggestion took them by surprise. “But as we thought and prayed about it, the sense of call became so clear that we knew we should accept if offered an opportunity to serve in Guatemala,” Debbie says.

Richard and Debbie appreciate the thorough orientation about Guatemala they received before making their first visits there with their presbytery. “Against that backdrop, we encountered our indigenous partners,” Richard recalls. “Experiencing their infectious commitment to Christ, their church, and their extended communities of faith touched our hearts on that first visit. And it continues to impact us.”

Richard and Debbie are firmly committed to the concept of mission in partnership. They want the church in the United States to learn how churches in other parts of the world grow and prosper amid scarce resources and other adverse circumstances.

“In the specific ministry to which we are called, our hope is that our relational and organizational gifts and skills help facilitate greater childhood, vocational, and theological educational opportunities among our partners, and that these opportunities provide a potential path out of poverty,” Debbie says.

Richard and Debbie are grateful for the support they have received from their home presbytery. They’ve been surrounded by people they liken to the “great cloud of witnesses” described in Hebrews 12:1. “They’ve been an inspiration and resource to us on this journey,” Richard says.

Prior to entering mission service, Richard worked for 26 years for Triumph Composite Systems, Inc., an aerospace manufacturing company in Spokane, Washington. He was a senior manager in the company’s information technology section. He holds a bachelor’s degree from Whitworth College in Spokane.

Debbie was the church administrator at Knox Presbyterian Church in Spokane, where she and Richard are members. She also is a graduate of Whitworth College. 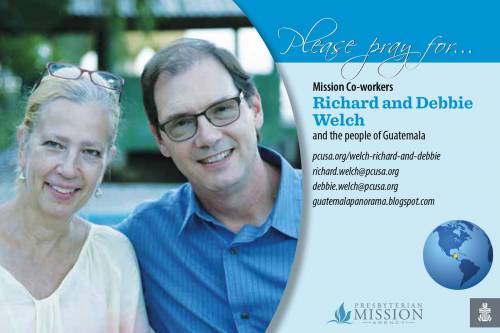 Use this card as you pray for mission co-workers Richard and Debbie Welch. The card includes a photo and overview of their work. Richard and…

Give to the ministry of Richard and Debbie Welch