Nadia is periodically in the United States and available to speak to congregations as her schedule permits. Email her to extend an invitation to visit your congregation or organization.

From 2010 to 2017, Nadia Ayoub partnered with the Reformed Church in Carpath-Ukraine in developing and implementing early childhood education programs in marginalized Roma communities. These educational programs served as outreach that sought to steadily improve the self-esteem and status of Roma children and their parents in the eyes of other Roma and those in the larger Ukrainian society.

Nadia’s work with marginalized Roma families endowed her with experience and understanding that prove invaluable in working with refugees in Greece in partnership with Perichoresis, which explains its mission as “the alleviation of human hardship regardless of ethnicity, race and creed.”

Perichoresis provides housing and support for approximately 550 refugees in 115 apartments in the city of Katerini on mainland Greece. Their programs include a nursery school, sports activities, and socio-therapeutic groups for children, adolescents and women. It also supports refugees with medical appointments and visits with lawyers. In her work with Perichoresis, Nadia serves as a children’s worker in its preschool programs and as a translator.

Greece is celebrated as the cradle of Western culture and the birthplace of democracy. Its mountainous mainland, countless islands and rich history attract over 25 million tourists each year. However, during the past decade, Greece has suffered a devastating economic crisis. In response to budget deficits, the country has instituted austerity measures that have debilitated many Greek citizens. Businesses have failed, the unemployment rate has skyrocketed and poverty has become much more widespread.

Greece has also found itself incapable of adequately addressing the European refugee crisis that has hit the country especially hard. In 2016–2017 alone, more than 1.3 million refugees traveled through Greece to reach safety in Europe. According to the International Rescue Committee (IRC), of Greece’s population of about 11 million, more than 65 thousand are refugees. Primarily from Syria, Afghanistan and Iraq, these refugees are fleeing war-torn, conflict-ridden countries in search of reunification with their families and a safe place to live.

Nadia’s call to serve refugees is rooted in her own experience of being a stranger in the many places she has called home. Immigrating from Egypt to New Jersey necessitated learning a new land and culture, as did the many years she spent in Central Asia and Ukraine. “As I think about my call to serve among refugees and strangers,” she said, “I see I was that stranger not once but many times. And God has always provided individuals and communities to welcome me. I only can give thanks to God and pray I will be able to welcome others and make them feel at home in strange places.”

When Nadia first saw the images of rubber boats filled with refugee women and children in the early days of the refugee crisis, she was struck by the realization that the situations in their homelands must be dire to compel them to risk their own and their children’s lives. In the summer of 2015, her heart became more burdened when she encountered refugee families with little children living on pieces of cardboard in a train station in Budapest, Hungary. “When I heard that many of those children were unaccompanied,” Nadia said, “I began thinking about how frightening it is to be alone and not understood because of language differences.” It was then that she felt a strong desire to commit herself to serving refugees.

Nadia strives to listen carefully to the refugees with whom she interacts so that she can understand their real needs.

Watch a video of Nadia Ayoub 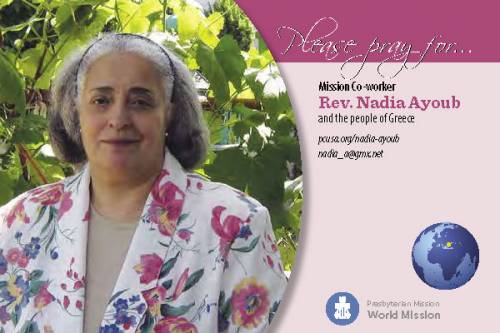 Use this card as you pray for mission co-worker Nadia Ayoub. This card includes a photo and overview of her work.  The Evangelical Church of…

Give in honor of the ministry of Nadia Ayoub