A Letter from Michael and Rachel Ludwig, serving in Niger

Sitting on benches with a small group in a dusty church building with no lights, I found myself saying, “This is why I love doing CHE!” In my time as a mission co-worker, I’ve learned that any strategy can look good on paper, and, conversely, everything is more difficult in real life. But then sometimes in the midst of working with people things go so right that you couldn’t have drawn it up better yourself. That’s what happened for us at a recent Community Health Evangelism (CHE) training that we were holding with four village pastors from our partner church, Église Évangélique de la République du Niger (EERN).

The plan was to hold this follow-up training on practices that can help them make their homes healthier and be good examples for their communities. The idea was to teach them how to make a clay cooking stove that’s engineered to provide the maximum amount of heat with the minimum amount of wood, and to keep it simple. Why? A major contributor to so many problems in Niger is the lack of trees, which is caused by the common practice of using trees as fuel to cook every meal. The shortage of trees causes the soil to degrade faster and the desert to grow.

But true to all CHE training, we wanted to be learner-centered, which pushed us to start with a problem that the learners care about. Deforestation isn’t a pressing issue to most people, but the issues they do care about are high prices and the amount of work that getting firewood can entail. So, we started the lesson with a skit about a husband who comes home and complains that the food isn’t ready. It’s quickly shown that the reason is his wife has so many things to do: pound the grain, do the dishes, take care of the baby, sweep the yard, and go out to search for firewood. The son has been busy with school work, so he couldn’t help, and the baby had to be taken to the clinic that afternoon because he stumbled into the open fire and got burned. These are all realistic problems that can lead people to start discussing potential solutions. This is a great time to demonstrate a cooking stove that will more than halve the amount of firewood you use (and it protects children from an open fire!).

However, before we started talking about clay stoves, the CHE method pushed us to first give the pastors time to suggest their own solutions and explore what they could teach each other. This CHE value of participation and ownership of the learners in the discussion and problem-solving is hard, but so fruitful. And the ensuing discussion was sweet. We spent the first hour discussing their solutions, which I was quick to tell them are probably the two most important things they can do to help with the real societal problems we brought up in the skit.

Michael working with Bible school students on a CHE lesson about vegetable gardening. 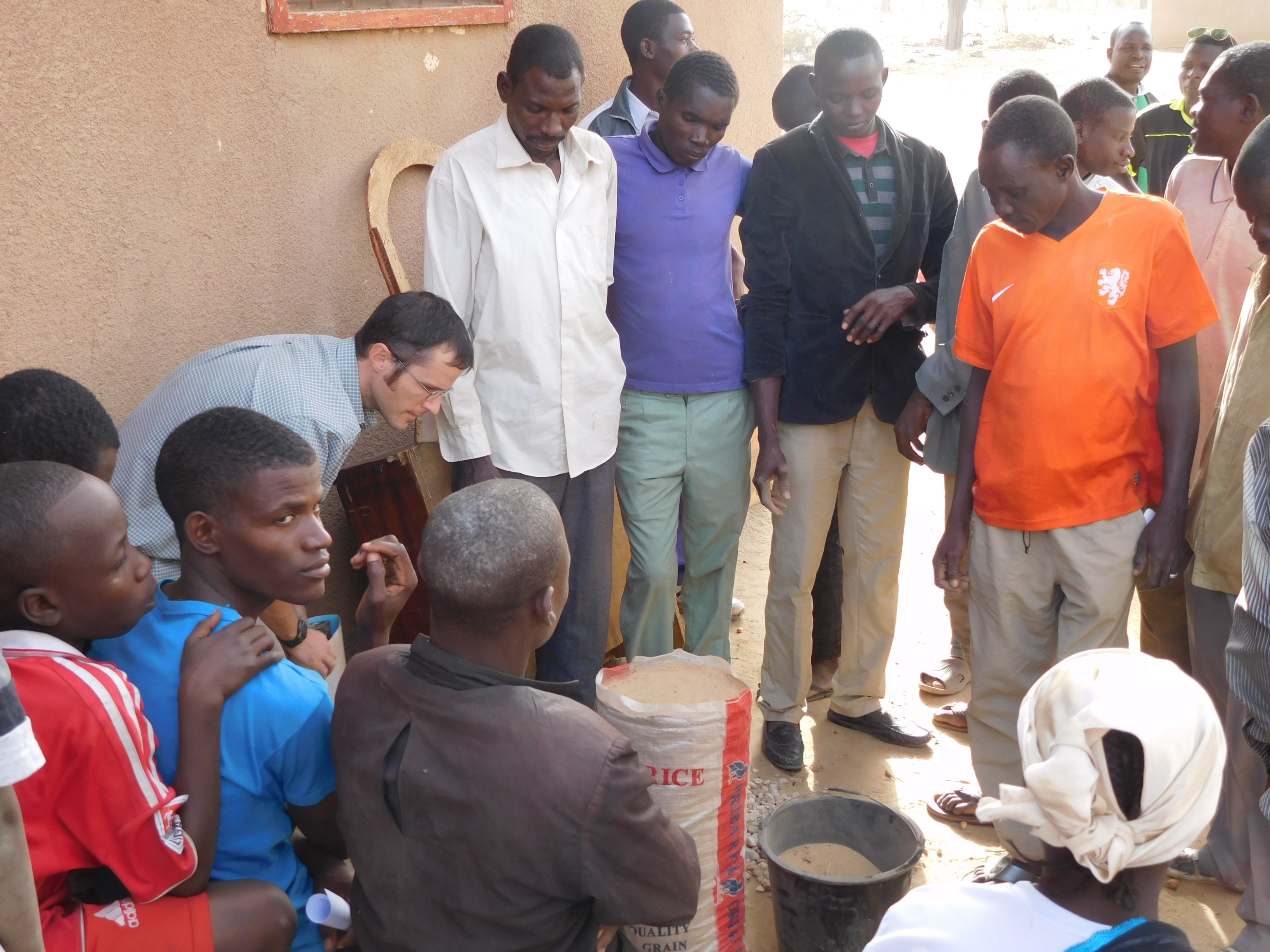 Their number one solution was that husbands need to share responsibility with their wives for the work in the house. This is a huge break from their culture in which men and women are highly segregated and men are mostly responsible for dealing with work outside the house (which is often only sitting and talking to other men in the village). But these pastors acknowledged that the work situation is unevenly spread and that, from a Biblical perspective, a husband should be sharing the work with his wife as a way to show care and respect for her. They also identified that they need to be leaders in modeling this kind of behavior for their children and neighbors so that it will impact their culture. If we had just stopped the training right there, I would’ve been extremely happy with their self-reflection and identification of what they need to do to help with this big problem.

But we continued, and I was equally surprised and excited to hear the second suggested solution! This was that they need to plant more trees! With more discussion about the usefulness of trees and the great examples they’d seen of people who had the foresight to plant trees in the past, they stated that every family needs to recognize that it is their responsibility to plant trees around them. Not only did the pastors recognize that there is a soil benefit here, but also important in their thinking is that then you don’t have to go far for firewood, and you can generate some good income by selling branches from the trees periodically. This was another extremely important idea that was self-initiated by the pastors and wholeheartedly supported with their reasoning, so I have great hope that they will actively engage in helping their neighbors also become interested in it.

Later, we did have some time to talk about efficient clay cooking stoves, and my colleague, the EERN National CHE Trainer, then went to each of the pastors’ villages to demonstrate how to make them. This is an amazing example of why the CHE method is so valuable. We didn’t go and give something to the pastors that they can use for a little while and then discard. We didn’t make them feel like we were going to solve their problems for them. Instead, we facilitated good discussion and problem solving, which can lead to more permanent solutions because the ownership is firmly with the “learners.” We still pray for follow-through with these great ideas, and for their endurance to go against the cultural norms to make a true difference in the lives of the people around them.

Please pray for us as we have the lovely opportunity to adopt another son from Niger. We are taking care of this six-month-old as we work on the adoption process this spring. We’ve also taken in a twenty-year-old orphan from a nearby village who is working hard to pass his high school tests and move on to university. He’s been a breath of fresh air for our family, giving us more culture and language practice, and he’s a favorite with our kids!

We want to thank you for continuing to pray for us and giving us encouragement through letters and emails. It means so much to our family to have you behind us when we encounter cultural difficulties, the amped-up heat of the hot season, or the remorse of missing family things from the US. And we’re continually reminded of the amazing way God provides through your gifts and financial support that let us keep at this work that is so connected to our shared beliefs and passions.