Register for the next Matthew 25 Online Event – Eradicating Systemic Poverty: Global Issues
Make A Donation Click Here >
Home › What We Do › Where We Work › Co-workers › Walking Between Life and Death

A letter from Cathy Chang serving in the Philippines

Congregations: Give to D507588 for Cathy Chang and Juan Lopez’ sending and support

According to the Holy Scriptures, Jesus knew about his impending death and resurrection but still turned his face toward Jerusalem (Luke 9:51). Knowing what we know now about the full extent of a trial, mockery, abandonment by his followers, physical torture and state execution, we cannot help but wonder why Jesus didn’t give up or run away in the opposite direction. As followers of Jesus, we walk with him between his life and death, even as we remember our immortality and vulnerability.

This year, I decided to join my husband Juan’s usual Lenten fast from sugar, but we weren’t prepared for the beginnings of our first full Lent season. We couldn’t imagine the ways that God would induce us to open our hearts and ears and eyes to stretch us beyond our best intentions. Living and serving in a country with a significantly sized Catholic population, we expected to follow the liturgical rhythm of Lent, starting with Ash Wednesday. We expected to receive ashes on our foreheads, but we didn’t even participate in worship on Ash Wednesday—and we’ve been singing a plentiful amount of Alleluias in Sunday worship services. A little more than halfway through Lent, we have already spoken about how it seems that Jesus was inviting us to do more than to look at our familiar traditions and ourselves. Instead God has been calling us to walk with people who already are harshly confronting their immortality and vulnerability when the lives of their family members are cut short or hanging in the balance. 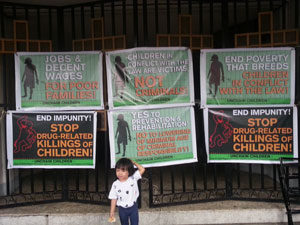 This teetering balance between life and death feels more real when we hear about the rising death toll due to the people whose lives are cut short because of the war on drugs. When lawmakers are preparing to reinstate the death penalty and when their debates include whether to lower the minimum age of criminality to 9, we call upon God to guide our lawmakers toward restorative justice.

Our wandering leads us to find God in unexpected places. One such place is in the many organizations joining their efforts in supporting the call toward the fullness of life. The Rise Up for Life and for Rights movement invited Juan to an event in early March to fight against the Lowering Age bill (Bill no. 002) for lowering criminal liability to 9. The program was sponsored by UNCHAIN, an organization that works in partnership with Iglesia Filipina Independiente (IFI) and the National Council of Churches in the Philippines (NCCP). The event included a children’s ecumenical liturgical service and children’s solidarity program against the lowering of minimum age of criminal responsibility. Various groups like the Salinlahi Alliance for Children’s Concerns, Children’s Rehabilitation Center, Child Hope Philippines, ECPAT Philippines, Association for Rights of Children in Southeast Asia (ARCSEA), Gems Heart Foundation, GABRIELA (a national alliance of women), Gabriela Women’s Party and Kadamay – Kalipunan ng Damayang Mahihirap were present during the event. As if that one event with so many organizations wasn’t enough to show how God is at work, Juan also drew more strength and courage for this work during the following week. He participated in a workshop with Father John Era, a Catholic priest serving in Payatas. Juan learned how to use a psychosocial approach in interacting as advocates and documenters for victims of drug-related killings and incidents.

For me this tightrope walk between life and death happens when I hear and meet the people behind the stories of overseas Filipino workers (OFWs) on death row trying to appeal for the preservation of their lives. In late February, I expected to join a group of church advocates to travel to ongoing hearings against Mary Jane Veloso’s alleged recruiters. Mary Jane is a Filipina woman who has been imprisoned in Indonesia for the last 10 years but was granted temporary reprieve from her execution in April 2015. On her way to what was a fake job in Indonesia as promised by a family member, this same family member allegedly smuggled heroin into Mary Jane’s luggage. Her recruiters are facing charges of fraud and illegal recruitment.

At the last minute, this hearing was canceled, but there was yet another meeting regarding Jennifer Dalquez and her appeal for life. Faced with few employment options, Jennifer decided to work in the United Arab Emirates. Her first employer attempted to rape her. Fearing for her life, she asked the wife of the first employer to repatriate her to the Philippines. While at the airport, she accepted another job offer. After working this job and other side jobs, another man contacted her to work as a house cleaner. After starting work, in the struggle to protect herself from this employer—who also attacked and sought to rape her—she fatally wounded him. She is imprisoned and awaiting an appeal hearing from the death penalty. After hearing Jennifer’s parents’ testimony, we church advocates offered our support and solidarity. This unexpected invitation launched me into an advocacy campaign that is teaching me how to walk between life and death. 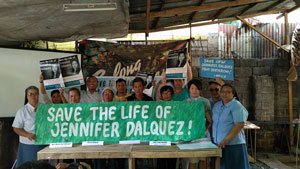 Without the guidance of a how-to book, except for cues from my fellow church advocates, I joined Jennifer in her walk between life and death. Although I have yet to meet her, I can walk with her because at the same time I am following Jesus when he turned his face toward Jerusalem. I don’t resign myself to death, but instead move toward baby steps and the bigger steps of faith that would also invite others around the world to appeal for Jennifer’s life. This walk has exposed me to many first-time experiences: a press conference; prayer vigil; protest marches; and Facebook posts with electronic signature campaigns to address both Philippine President Duterte and UAE Sheikh Khalifa bin Zayed al Nahyan. I have also helped prepare pastoral statements and letters from both the United Church of Christ in the Philippines (UCCP) and PC(USA) leaders. (These letters can be found at: https://www.pcusa.org/news/2017/3/24/call-prayer-stated-clerk-jennifer-dalquez-and-plig/). 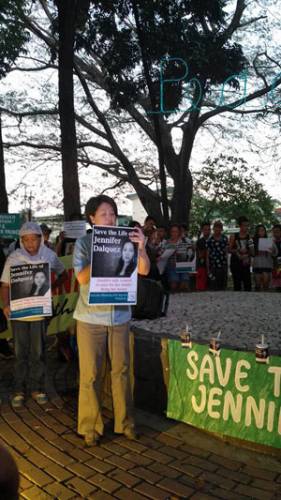 Leading opening prayers during an ecumenical vigil for Jennifer Dalquez

On March 27, during a vigil for both Jennifer Dalquez and Mary Jane Veloso, we received news about both women and their appeal hearings. The United Arab Emirates judge postponed Jennifer’s hearing to April 12, since only the son of the deceased employer appeared in court. However, on April 12, neither of the two sons of the deceased employer appeared in court—so the appeal hearing was once again postponed to April 26. The Philippine Court of Appeals has issued a 60-day temporary restraining order (a provisional remedy issued by the defense lawyers who asserted that this deposition violates Veloso’s recruiters’ right to face her in court) against the judge who was supposed to take Mary Jane’s deposition on April 27. More waiting, and more walking, and maybe you wonder what keeps us walking between life and death with the people we meet?

As we mark our first year since moving to the Philippines, Juan and I are quickly learning about a pace and a peace that will keep us going for more years to come. We’re humbled to walk with these families. We’re thankful to God for the church advocates and human rights defenders who invite us to accompany them. We’re thankful to Jesus who walks with us between life and death. We’re thankful for the churches and individuals who, through prayer and financial support, support us and sustain us in this calling to mission service. Just as Jesus invited us to walk with him, we invite you to join us in this walk between life and death.